The Haldane High School boys’ basketball team picked up a 53-43 victory over North Salem at the Putnam Challenge on Jan. 5 at Carmel High School but came up short against Westlake, 44-38, on Wednesday (Jan. 9).

Alex Kubik and Mame Diba each had nine points to lead the Blue Devils (7-4).

“They beat us on the boards,” said Coach Joe Virgadamo. “We didn’t get out and run, and second-chance shots hurt us in the fourth quarter.”

He said sophomore Darrin Santos had given the team “good energy” in the second half, and that senior Kyle Sussmeier nailed a few threes to keep the Blue Devils close, but “it was not a good game for our team overall.” 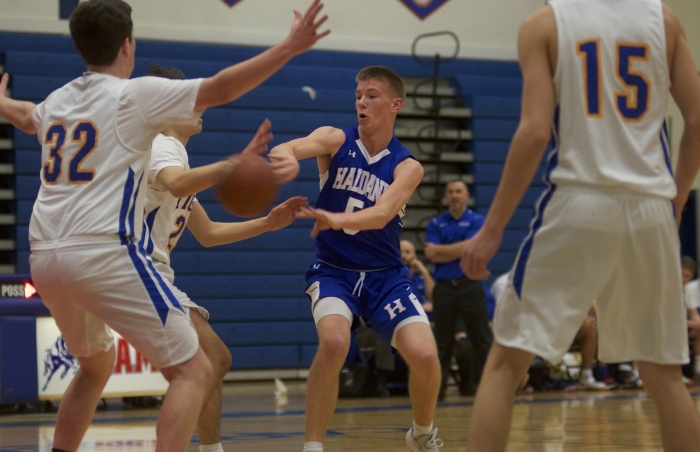 Matt Champlin led Haldane with 23 points in a win over North Salem. (Photo by S. Pearlman)

Against North Salem, Matt Champlin led Haldane with 23 points, and Diba added 20. In that game, Virgadamo said, “we brought some great intensity. Our defense was also impressive, and we had a 22-5 first quarter. We created turnovers and finished in transition.”

At one point the Blue Devils were up by 23 points, although North Salem cut that lead to six. “We bent but didn’t break,” said Virgadamo.

Haldane is scheduled to host Pawling on Tuesday, Jan. 15, at 6 p.m., followed by a game at home against Blind Brook on Saturday, Jan. 19, at 4 p.m. that will benefit the Cystic Fibrosis Foundation. 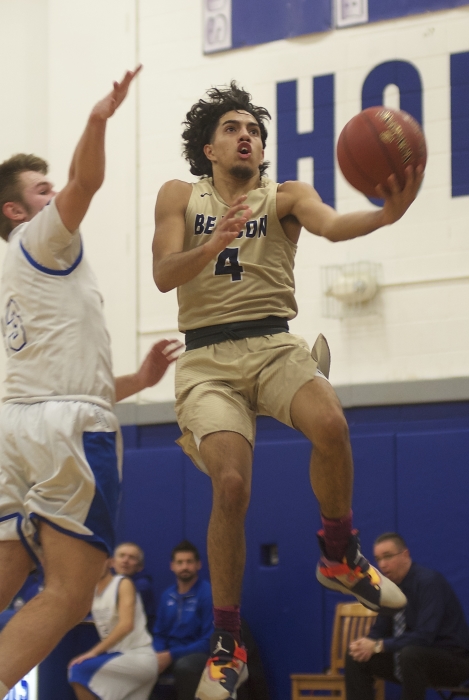 A strong showing at the free-throw line was the deciding factor on Tuesday (Jan. 8) in Montrose as the Beacon boys defeated Hendrick Hudson, 57-47, to improve to 6-5 for the season.

After a slow start, the Bulldogs raced to a 26-19 halftime advantage and never looked back.

The Beacon win was highlighted by what turned out to be a key, 23-of-28 showing at the free throw line.

“Hen Hud beat us pretty good last year, but they lost a lot of players to graduation,” said Coach Scott Timpano. “I knew it would be a battle, and it was. Every time we went up, they came back. They got it to two points in the fourth, but we held them off.”

Beacon held on behind Garner, who was 6-for-6 at the line in the fourth quarter. Thompson was 8-of-8 at the stripe and also had three steals.

On the previous Friday, Jan. 4, the Bulldogs came up short at home against Poughkeepsie, 79-64.

“That was a tough loss,” Timpano said. “Poughkeepsie is an excellent team — they’re big and they can shoot. We stayed with them the entire game, and we had it at two points in the last few minutes. They hit a couple of threes and hit free throws to blow up the score. We showed what we’re capable of.”

Beacon was scheduled to host Lourdes today (Jan. 11) at 6 p.m. Before the game, three former Beacon athletes and two girls’ track teams will be inducted into the school’s athletic Hall of Fame. The Bulldogs will travel to Peekskill on Wednesday, Jan. 16, for a 6:15 p.m. tip.

The Haldane girls’ varsity basketball squad picked up a 54-36 victory over Bronxville on Jan. 3, its second win of the season against eight losses.

“We played a decent game,” said Coach Tyrone Searight. “We only had 10 turnovers, which is a very good number for us.”

The Blue Devils will play in a tournament in Peekskill on Saturday, Jan. 12, and host Saunders on Monday.

The Beacon girls’ team dropped a 41-34 decision to Hendrick Hudson on Tuesday (Jan. 8) at home. They were scheduled to visit Lakeland on Thursday and host Harrison on Jan. 15 at 5 p.m.