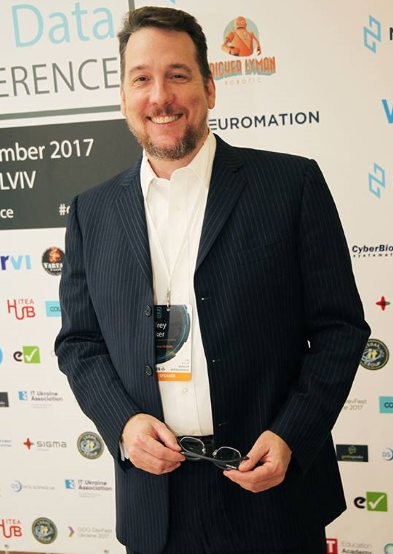 Jeffrey Ricker is the chief executive officer of Ricker Lyman Robotic, which opened in Beacon last summer at 319 Main St.

Are you building robots on Main Street?
We’re not building mechanical arms, yet. We’re involved with machine learning, artificial intelligence, computer vision. We’re pushing automation as far as we can.

What’s the story behind all the retro futuristic artwork all over your office and website?
It’s by a graphic-design team from Lviv, Ukraine. I told them: “In the 1950s there was this innocent exuberance for technology and all its potential. I want to capture that.” And I’ll be damned if they didn’t! Except for flying cars, people in the 1950s predicted nearly all of the future [technology]: video phones, rapid transportation, satellites.

Where are we with technology today?
It’s four parts awesome and one part creepy. How do we prevent the creepy from taking over? How do you safeguard against abuse of the technology we’re creating? We’re very conscious of that.

One of your products is called Hivecell. How does it work?
Our customers are Fortune 500 companies who are using machine learning and artificial intelligence and the “internet of things.” There aren’t that many, which is surprising. A lot of people talk about it, but few are actually doing it. Those that are realize you can’t push everything to the cloud [remote storage], so there’s a push to bring computing power back to the edge [local storage]. That’s where the exponential growth is going to occur, and that’s what Hivecell is designed for. It allows a company to do its big data processing, machine learning and artificial intelligence in the field — at restaurants, on oil rigs, on the factory floor — and keep it under their control, and manageable, and observe and change it with the push of a button. Otherwise, there’s not enough bandwidth to move the data [to and from the cloud]. For example, as smart cars get smarter, you can’t put a data center inside every one. That power is going to have to be accessible locally, such as on a cellphone tower. There will have to be cells of computing power that you reach out to as you move across the country.

Can you explain the blockchain?
It means that individuals can safely exchange data, exchange value, peer-to-peer, without a third party being involved. It’s as big a step as currency was. Before, people had to say, “I’ll give you five sheep for 21 goats, and I also have lumber.” But that way of trading became so hard they created money. Then you could say, “I’ll give you X amount of money for the sheep, and Y amount of money for the goats, and Z amount of money for the lumber.” It made trade easier. Blockchain does that, too. Everything we trade now requires a trusted third party: a bank, an exchange, a market. The third party takes a piece of the action for the trust it provides, but it also keeps your data! It knows everything about you. In the near future, with blockchain, you won’t need a Facebook or a LinkedIn or Instagram to share your social data. You’ll be able to hold on to it and share it only with who you want, peer-to-peer. We hope Hivecell has a part in that.