Angelo “Big Ang” Notaro is the founder of the annual Hudson Valley Wing Fest, which takes place in Poughkeepsie on Jan. 26. See bap.ticketleap.com/hv-wingfest-12. 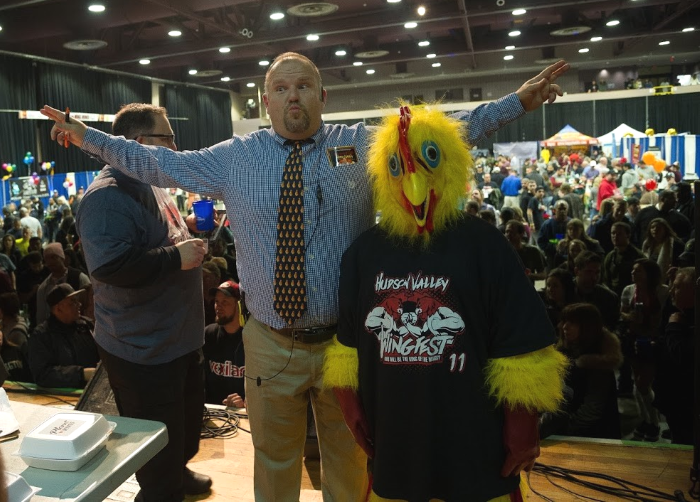 Your day job is as a host on K104.7, which is based in Beacon. How did you get into the food festival business?

I grew up in the restaurant business, so when I went to a wing event, I thought I could do better. Chicken just has a great taste — if it’s cooked right, it’s a winner. I focused on getting the freshest wings, the most flavors and options.

Is the wing fest a competition?

It’s a tasting event. We get the best wing restaurants, caterers and food trucks — there are more than 30 this year — and they compete in categories such as dry rub, Buffalo wings, hottest and for King of the Wings. [In 2018, Whistling Willies of Cold Spring and Fishkill won in the barbecue and most creative categories.] They’re all neighborhood places. The only chain is Planet Wing, but they built their empire out of Middletown.

How far will people come for wings?

Rhode Island, Vermont, Philadelphia — it’s unbelievable. Each year a few hundred come up on the train from the city. Last year we had more than 2,800 people, all of them ready to eat.

There isn’t much to a wing. Do people get full?

Are you kidding? With general admission, you get about 35 wings [with a guarantee of at least one per stall]. With VIP, it’s all you can handle plus cider and beer, and you get in 90 minutes early. If you’re hungry and fast, you can enter the wing-eating competition. Last year the winner consumed 18 wings in 1:44. The prize money is $1,047. We give the leftover wings, and a share of the profits, to a group called Rescuing Leftover Cuisine, which donates food to homeless shelters and to feed the hungry.

What if wings aren’t your thing?
I have a bunch of other festivals: Chowder Fest on March 9, and Bacon Bash, Mac & Cheese Fest, Taco Fest, Seafood Festival. Pizza and Meatball Fest. I’m a popular guy in the Hudson Valley! At Wing Fest we have other stuff going on like live music and a wing illusion show. The magician will have something special up his sleeves. I can’t reveal what that is.