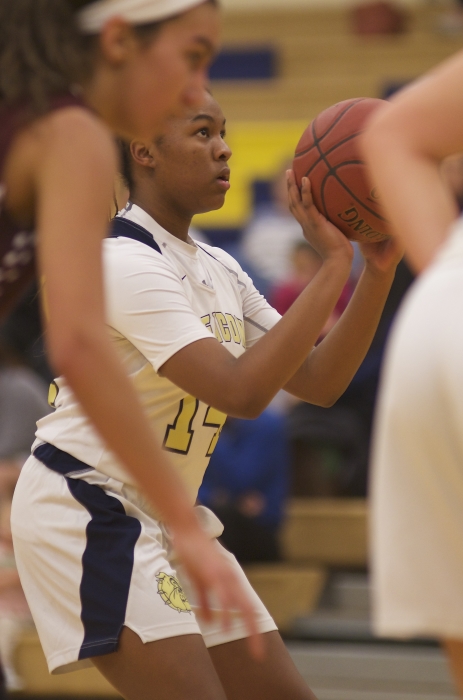 Dania Gillins at the free throw line against Harrison (Photo by S. Pearlman)

The Beacon High School girls’ basketball team battled last week in home games against Peekskill and Harrison but continued to search for its offensive rhythm.

Against Peekskill on Wednesday (Jan. 16), the Bulldogs were in a 16-6 hole by the end of the first quarter on the way to a 52-39 loss. Grace Affeldt had a strong game, scoring 14 points, and Lejdina Gecaj added nine and Skyler Kurtz, six.

A day earlier, Beacon hosted Harrison (4-7), which got off to a fast start against the Bulldogs with a 19-4 lead after one quarter, and Harrison held on for a 44-29 victory after the teams played even for the remainder. Sarah Evans led Beacon with nine points, Kurtz had seven and Affeldt, six.

Coach Christina Dahl said her team, which is now 2-12, continues to work on its game. “We’ve struggled the last few games on offense, and we could have done a better job on defense,” she said. “We have to catch the ball ready to shoot and be confident in attacking the basket. And we have to focus, and show up ready to compete.”

The Bulldogs are scheduled to visit Poughkeepsie on Thursday, Jan. 24.