Eighteen months after the Beacon City Council recrafted a program that provides below-market-rate housing with priority to volunteer emergency responders and city and school employees, the apartments are beginning to fill, although it may be too early to accurately measure how “affordable” they are.

“These units are for the portion of the population that is working full-time but not making six figures,” explained Lauren McLaughlin, home ownership manager for Hudson River Housing, the nonprofit agency that administers Beacon’s program. “It’s for the nurse or schoolteacher who’s not able to afford fair-market rent.”

A recent notice on the city’s website advertises studio, one- and two-bedroom apartments at two developments, at 7 Creek Drive and 344 Main St., with rents beginning at $1,508 per month. The regulations passed in 2017 do not apply to these two projects, because their plans were approved by the Beacon Planning Board before the revised formula was put into place. Instead, they are being offered at the city’s previous “affordable” standard: 30 percent of 100 percent of the AMI.

Two below-market rate units will also soon be available for purchase at the Beekman Street condo complex behind City Hall. A one-bedroom will cost $192,760 and a two-bedroom, $275,462. Some market-rate condos at the development, which is called The View, have been advertised for more than $1 million.

At a meeting of the Beacon City Council on Monday (Jan. 21), resident Michal Mart asked its members to revisit the housing issue. “If you’re making $66,000 a year, it’s not affordable to pay $1,500 in rent for a studio apartment,” she said.

Council Member Jodi McCredo said she shared Mart’s concerns. “It doesn’t mathematically make sense to me,” McCredo said. “I feel like the people who qualify for these apartments couldn’t possibly afford them. There has to be a better way to help people in this community.”

Mayor Randy Casale said he’s heard good things about the program. “I know people have moved in and taken the benefit from it,” he said. “I do know it’s working but it’s new. As more [units] come online, we’ll have more available.”

Five developments are part of the city’s workforce housing program: 344 Main St. (two units), 7 Creek Drive (five), the Beacon Theater (three) and The Lofts at Beacon (14), as well as four condos at The View, although about half of the total units aren’t available yet.

Eligible residents must apply through Hudson River Housing. The developer may rank applicants based on a credit check or rent history, as long as fair housing laws are followed, McLaughlin said.

A common misconception, she added, is that workforce is part of the federal program that provides subsidized housing, such as Section 8. That housing is generally available to people making 30 to 50 percent of an AMI. The Beacon Housing Authority provides vouchers for more than 500 Section 8 units in Beacon at the Davies South Terrace, Forrestal Heights, Hamilton Fish Plaza and Tompkins Terrace complexes.

Another affordable complex outside of the workforce program, the West End Lofts, should be ready for occupancy by September, developer Ken Kearney said this week. Just south of City Hall, the Lofts will include 50 affordable artists’ spaces, 22 middle-income units and 25 market-rate apartments within walking distance of Main Street and the train station. The development received $4.5 million in state funding.

Statistics comparing Beacon’s affordable housing stock with the rest of Dutchess can be misleading. The Dutchess County Department of Planning and Development publishes an annual rental survey but its most recent data was compiled before Beacon’s new formula was implemented. 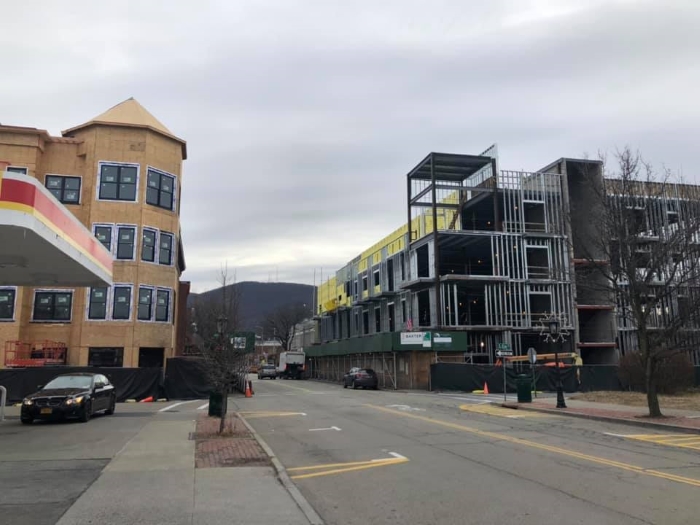 Two developments going up opposite each other on Main Street in Beacon. (Photo by Robert Maddock)

The data, for example, show many more below-market rate apartments in other Dutchess communities and put the average market-rate rent for a one-bedroom apartment in the county at $1,224 and the workforce rate at $806, far below the rents being advertised in Beacon.

The Dutchess survey also indicates that a household would need to earn $50,280 annually to afford the average one-bedroom apartment in a mid-sized (20 units or more) complex, which, it notes, could be a challenge for seniors, single-income families or entry-level employees.

A 2018 report by Hudson Valley Pattern for Progress, a nonprofit that monitors housing costs, found the median renter in Beacon earned about $34,000 annually, and that 50 percent of city apartments could be considered “affordable,” meaning the tenant paid less than 30 percent of his or her monthly income for rent.

“It’s hard to get apples to apples” when comparing Dutchess communities, explained Mary Linge, the director of real estate development for Hudson River Housing. “Beacon just started its program to keep the people who are in Beacon,” whereas Fishkill and other municipalities have had affordable initiatives in place for a decade or longer.

Dutchess statistics also don’t yet include a non-workforce project like the West End Lofts, which will still add to Beacon’s affordable housing stock. But the various programs, Linge said, all have the same goal, which is “to make sure you’re preserving affordable housing for this income level for the long term.”

2 thoughts on “With Housing, What is ‘Affordable’?”