Shauna Ricketts of Cold Spring, who graduated last year from SUNY Geneseo, is a Fulbright scholar sponsored by the America for Bulgaria Foundation. She teaches English at a high school in Pravets, a town about 40 miles from Sofia. 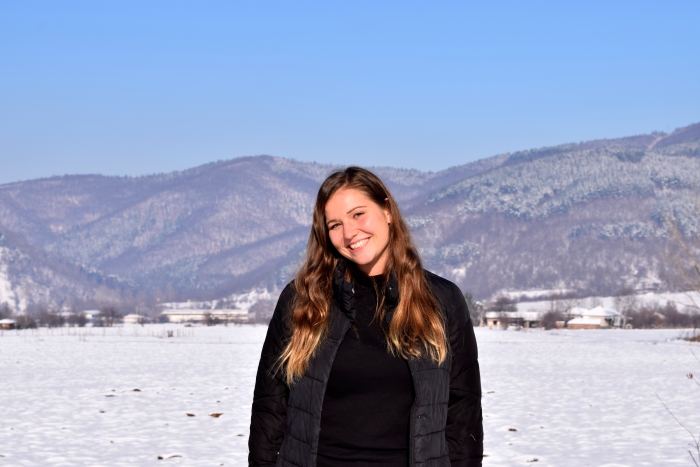 Fulbright places its scholars all over the world. Why did you apply to go to Bulgaria?

Having grown up in the Hudson Valley, with Pete Seeger and its folk activism, I was intrigued by Bulgarian folk culture and I hoped to learn more about the way folk cultures contribute to change. Folk culture in Bulgaria, given the country’s Communist past, is fascinating. Also, I had worked for a documentary production company in New York City and some of my colleagues mentioned working with Bulgarian filmmakers, which put Bulgaria on my radar.

Beyond teaching, what is expected of you?

The cultural exchanges I experience are not formal. They are casual moments that get me thinking about systems, and the creation of art and societies. My mentor at the school, Stefka, invites me to her home to roast peppers one by one to make lutenitsa (a traditional puree with eggplants and tomatoes), I shoot hoops with students while discussing the meaning behind American rap lyrics, and I sit at a health clinic with a student and compare the U.S. and Bulgarian waiting-room experiences.

It’s about 4,000 people. It’s surrounded by mountains. There is fresh milk for sale out of the back of a 1972 Volkswagen hatchback, grapes on the trees lining the streets and herds of sheep in the distance. I live in a simple block building and listen to people reminiscence about how they enjoyed oranges and bananas on Christmas before the fall of Communism. Generally, the towns and villages of Bulgaria are painted in yellow, which may because the country is said to have one of the lowest happiness ratings in the world. All the Bulgarians I have met emphasize family, relaxation and the importance of a good meal.

What is a good meal?

For breakfast or lunch, they enjoy banitsa, a salty pastry made from eggs, cirene [cheese] and filo dough. Many varieties exist which use ingredients such as pumpkin, cabbage and chocolate. A favorite for dinner is Shopska salad, with tomatoes, cucumbers, peppers, onions and cirene. It’s often paired with rakia, a brandy made from local fruit.

How does your Bulgarian school compare to Haldane?
A lot of my students are involved in basketball and their dedication brings me back to my days playing for Haldane. One of the major differences is that Bulgarian students are grouped into a class of about 20 kids from eighth grade until they graduate. And instead of moving from class-to-class each period, they stay in the same classroom all day and for five years of high school. This contributes to a camaraderie in each class rather than the grade as a whole.