On Jan. 22, Gov. Andrew Cuomo signed into law the Reproductive Health Act, which removes abortion from New York criminal statutes and which supporters say provides a buffer should the U.S. Supreme Court decision in Roe v. Wade ever be overturned.

“Women’s reproductive rights should not be subject to the whims of the Trump administration or Supreme Court,” Jacobson in a statement. Serino, in contrast, called the act “an extreme proposal that goes far beyond the current standard” of abortion rights.

How They Voted on Election Reforms

Serino also criticized the removal by the act of the criminal charge of “abortion in the first degree,” which could be applied when an attacker caused the loss of a pregnancy after 24 weeks. State penal law now defines a homicide as applying only to a “human being who has been born and is alive.”

According to the National Conference of State Legislatures, at least 38 states have fetal homicide laws, and in 29 the laws apply from conception. Serino said in a statement that she supports a bill introduced on Jan. 24 by Sen. Cathy Young, a Republican whose district is south of Buffalo, that would establish the felony of “assault on a pregnant woman,” even if the attack does not cause the loss of the pregnancy.

Two bills addressing sexual orientation and gender identity were signed by Cuomo into law on Jan. 25:

Establishes that efforts by mental health professionals to attempt to change sexual orientation on patients under 18 years of age is a form of misconduct.
Passed Senate, 57-4 (Serino voted yes)
Passed Assembly, 141-7 (Galef and Jacobson voted yes)

These bills passed the Senate and Assembly in late January but have not been signed by the governor:

Allows a court to issue an Extreme Risk Protection Order that prohibits a person determined by a court to be a threat to themselves or others from purchasing or possessing a firearm for up to one year. A family member, law enforcement officer or school administrator can ask a judge for the order.
Passed Senate 42-21 (Serino voted no)
Passed Assembly 100-37 (Galef and Jacobson voted yes)

Establishes a waiting period of up to 30 days before a gun can be sold to an individual who has not cleared a background check. (Under federal law, a potential buyer whose FBI check comes back as “delayed” could be sold the gun after three days if the agency has not completed the check.)
Passed Senate 40-23 (Serino voted no)
Passed Assembly 82-52 (Galef and Jacobson voted yes) 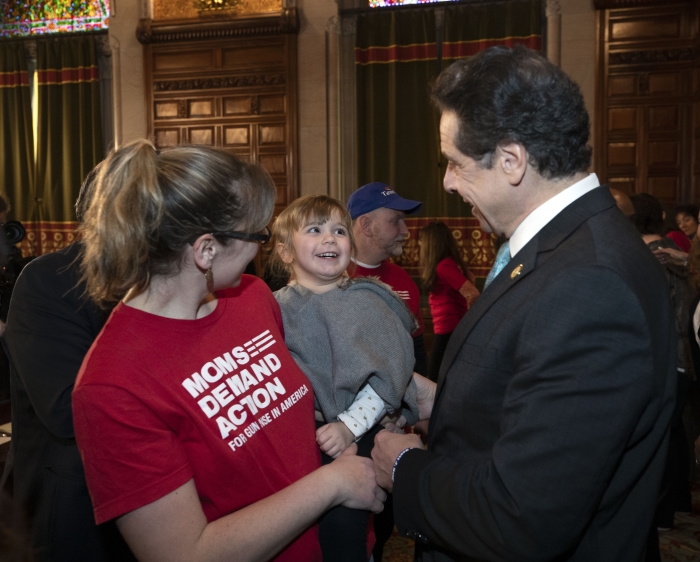 Gov. Andrew Cuomo, right, met with gun-control activists in Albany on Jan. 29. (Photo by Mike Groll/Office of the Governor)

Requires people who have homes in New York but don’t reside here to waive the confidentiality of their home-state mental illness records when applying for a firearm license.
Passed Senate 62-1 (Serino voted yes)
Passed Assembly 145-1 (Galef and Jacobson voted yes)

Bans the purchase of devices such as “bump stocks” that can turn weapons into machine guns. It is illegal to add the devices to firearms but not to purchase them.
Passed Senate 49-14 (Serino voted yes)
Passed Assembly 134-11 (Galef and Jacobson voted yes)