Hold off Westlake on senior night

The Haldane boys’ basketball team gave their four seniors something to remember with a 56-47 victory over a persistent Westlake team on Wednesday (Feb. 6) on a night when the players and their parents were recognized. 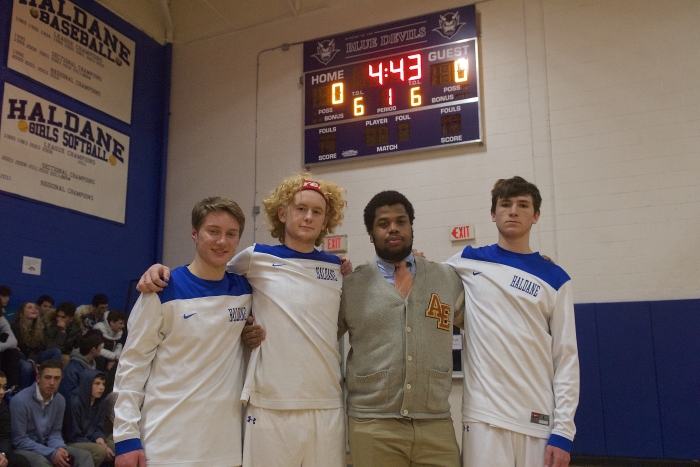 The team honored Kyle Kisslinger, Devon Siegel, Peter Rodriguez and Kyle Sussmeier before the contest, then carried that energy into the game, building a 10-point halftime lead. The Blue Devils gave up a piece of their lead in the third quarter but kept the game out of reach in the fourth to improve to 14-5.

“The energy was the best of the year for us,” said Coach Joe Virgadamo. “The guys came out and played with great intensity and focus.” 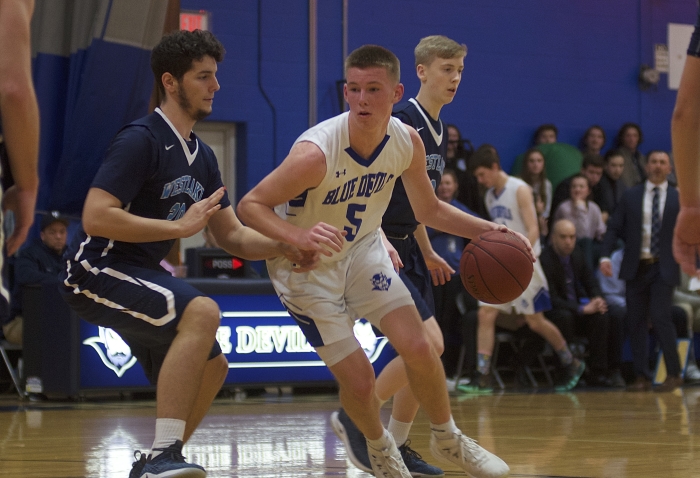 “Matt had his best game of the year,” Virgadamo said. “He was unbelievable, finding ways to score and rebound. It was a great way to bounce back after a tough [43-41] loss to Pawling” on Feb. 2 at Vassar College.

The Blue Devils finish the regular season on Tuesday, Feb. 12, at home against Blind Brook, with a 6:30 p.m. tipoff. The game is part of a fundraiser for the Cystic Fibrosis Foundation that also will feature the junior varsity against Blind Brook at 4:45 p.m. and the modified team at 3:15 p.m. against Garrison.

Haldane is scheduled to play in the Section 1, Class C semifinal on Feb. 21 at the Westchester County Center in White Plains at a time and against an opponent to be determined. The championship game is scheduled for Feb. 23 at Pace University.

After a victory over North Salem last week and losses to Hendrick Hudson and Hastings, the Haldane girls’ varsity (5-14) will finish its regular season at Putnam Valley on Feb. 12. The Section 1, Class C girls’ tournament begins on Feb. 19.

Peter Hoffmann, a 2015 Haldane graduate, was named the New England Small College Athletic Conference men’s basketball player of the week on Feb. 4. He averaged 18 points and five rebounds during three wins for Hamilton College while shooting 56 percent from the floor. The Continentals (19-2) are ranked as the No. 8 Division III team in the nation by D3Hoops.com.