It is easy being green.

That’s the lesson that Marjorie Guigliano, a second-grade teacher at the Garrison School, has shared with her students, who have harnessed their own natural energy to transform their classroom into a largely plastic-free zone with live plants and other adjustments in the name of protecting natural resources.

Guigliano was hired at Garrison shortly before the 2017-18 school year began. She had to organize her classroom quickly, she recalls, and leaned heavily on her teacher’s aide, Barbara D’Alessio (“Ms. D”). Together, they streamlined and converted some plastic objects into materials kinder to the planet. They also added outdoor gardening and a botany area along with recycling projects. 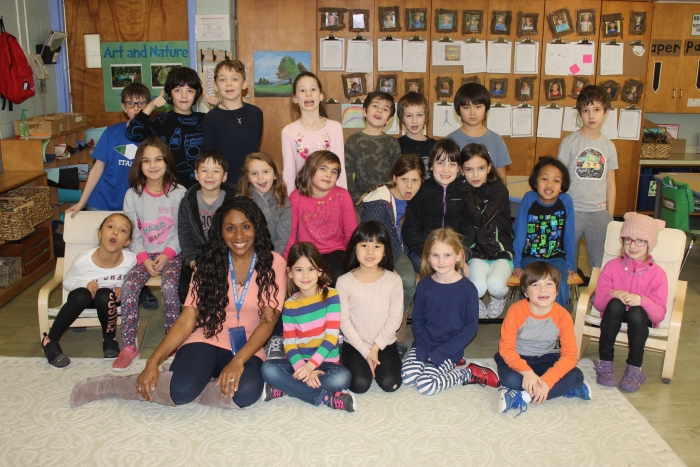 Garrison School second-graders are shown with their teacher, Marjorie Guigliano

Early in the year, in partnership with a nonprofit called One More Generation, the 7- and 8-year-olds spent a week learning about plastics and recycling. “They need that background to make sense of it,” Guigliano explains.

She says she emphasizes for the students “where goods and products come from” and hopes what they learn “will not be limited to the classroom, but extend to the cafeteria and promote waste reduction, recycling, and increased composting for the school garden.”

The idea of creating a green classroom came easily to both women. Before coming to Garrison, Guigliano taught at Growing Up Green, a charter school in Long Island City. “The primary goal in the social curriculum was for the students to internalize the green mindset, so they would know that sustainability was the responsibility of everyone in the school community,” she says.

What the Kids Say

“Botanists are people who grab the red pitcher and water the plants. We’re going to have a lemon party!”

“We have mostly wooden stuff.”

“This is a green class. We wanted it to be more outsidey, so we got plants to help with that.”

“What I like most about this classroom is the Zen Den; you can go there for 3 minutes to relax.”

“We got shopping bags that we drew a picture on and I told my parents we should use them.”

“We all made butterflies a few months ago. We put lights up and we turn the other lights off and use the soft lights.”

“We have the lights and also this fountain. Water pours down. My job is to turn the lights on. I really like that.”

“There’s so much plastic at the beach. In the water, the garbage never goes away.”

“We’re trying to eliminate all the plastic we’ve been using. We had, like, 20 plastic bins. We used to have a plastic calendar, but now we have a wooden one, out of repurposed material.”

“Almost everything in here is a kind of nature, like bamboo sticks and picture frames made out of bark from the woods.”

When she applied to teach in Garrison, she was excited to learn the district owns a nearby, 185-acre forest. “I thought, the sky’s the limit,” she says, but also was surprised to find “the indoors didn’t match the outdoors.”

D’Alessio relied on her experience overseeing Montessori and Waldorf curriculums at private schools and working at residential schools, where she led outdoor horticulture and environmental programs. 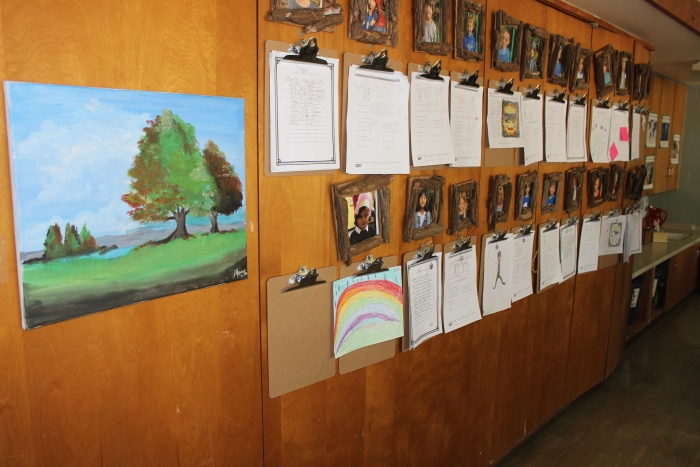 Each child’s photo is in a frame made with bark gathered from the school forest.

The women also incorporated what is known as a “responsive classroom” approach that emphasizes “a social curriculum in which we take time to do ‘community meetings’” with the children, Guigliano says. “We validate anything the children are feeling. We don’t let things build up.”

For the 2018-19 school year, Guigliano and D’Alessio received a $2,336 grant from the Garrison Children’s Educational Fund to expand the environmental curriculum. There are now more green objects in the room, including shelving, pillows, containers and storage for books made from sustainable materials. Plastic letter models have been exchanged for wooden ones. There’s an in-room recycling center, where the children learn to sort. Artwork and photos of each child have been secured inside frames made from fallen bark collected from the school grounds. 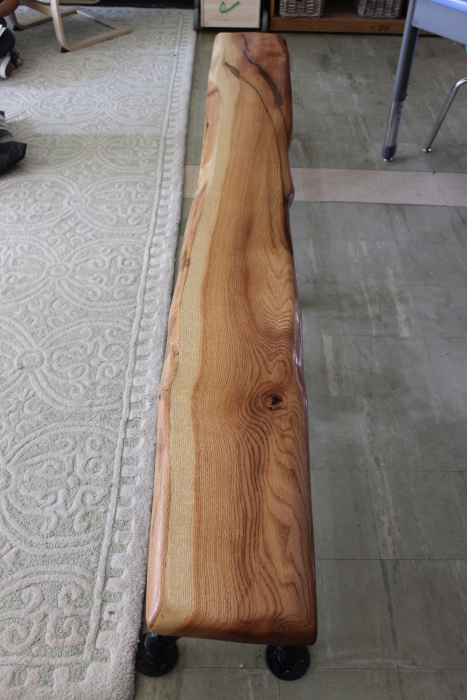 The color of the classroom walls has been muted, repainted over the summer with zero-VOC [volatile organic compound] paint and earth tones. A Zen Den gives mindfulness a destination, and there’s a small waterfall fountain.

Also new is a wood bench hewn by Mike Monteleone of Monteleone Contracting from a slab donated by James Dain of Dain’s Lumber. Catherine Treuter and Claire Ruckel of the Philipstown Garden Club have been advising the young botanists (the club also has donated funds), and Dutch’s Salvage in Nelsonville donated a wheelbarrow.

The students are working on a project for a school climate summit scheduled for later in the year. Guigliano says many have reported to her that they have made suggestions at home about how their families can reduce or eliminate plastics such as grocery bags. Families also were asked to shift to reusable water bottles and, the teacher reports, compliance has been encouraging.