When Haldane government students filed into their classroom on Monday (Feb. 4), they were greeted by a new teacher.

OK, he wasn’t all that new. Both of his daughters go to the Cold Spring high school, and like many parents he attends Haldane events or is spotted around the village, since his family lives just up the hill.

Nonetheless, it isn’t every day that a member of Congress and avowed public affairs wonk takes command of the white board. 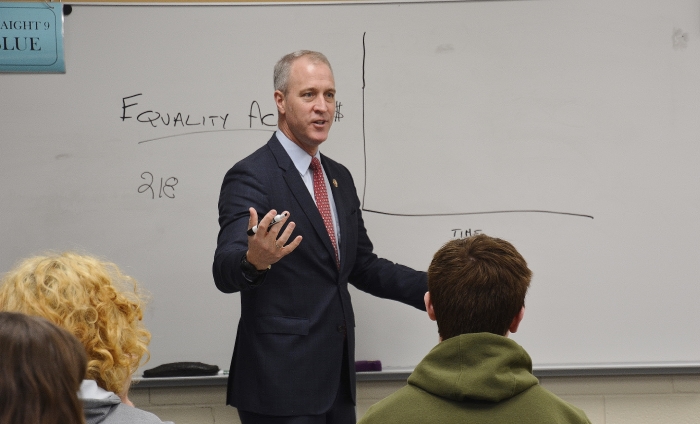 U.S. Rep. Sean Patrick Maloney controlled the white board while speaking to students at Haldane High School on Feb. 4. (Photo by L.S. Armstrong)

“I’m excited about what’s happening with young people in our country,” he said at the offset, citing the #MeToo and Black Lives Matter movements, gun-control activism after the 2018 Parkland school shooting in Florida, and young people’s involvement in elections, which, he said, helped produce the most diverse Congress in history, with the most female legislators ever.

But he urged students not to be complacent, because “there’s a lot of things we need to do better in this country, and it’s on people like you” to help.

Then for some 40 minutes, he took questions on a spate of topics:

Maloney termed social media “a mixed bag,” adding that “I worry about it in politics.” One problem, he said, is that “it’s anonymous; it’s often unreliable; it can be used to distort or spread disinformation and confusion.

“Democracy depends on truth, on being able to know what’s true and what’s not,” he said. “One of the biggest challenges your generation is going to have to handle is: ‘How do you know what you know?’ ”

He said that immediately after his recent appointment to the powerful House Permanent Select Committee on Intelligence, his social media accounts “started to get attacked by bots,” which he attributes in part to foreign governments “trying to sow disruption.” After TV interviews, he said, he received other threats, including statements that “‘You should be killed. Your whole family should be dragged out and shot.’ This is what social media has done,” he said.

Asked if he gets information from Twitter about President Donald Trump’s positions, he replied: “Of course. Some of the president’s tweets are weird. What’s very unusual and very unnerving is that the president’s own senior advisers often find out” about policy changes from Trump tweets.

Generally garrulous and animated, Maloney was more subdued when discussing the Intelligence Committee, where he encounters what he called an “interesting and complicated and nerve-wracking set of stuff sometimes.” The committee is looking into Russian interference in the 2016 election separately from the similar investigation led by Robert Mueller, the special counsel. As both probes continue, “let’s just get the facts. Let’s find out what happened, and let’s keep it fair,” he urged.

The congressman also foresees grave new threats from cyber terrorists. “Some of us believe we are at risk of a cyber 9/11,” he said. The world’s leading cyber players are the U.S., Israel and “four countries not our friends: China, Russia, North Korea and Iran,” who have “an asymmetrical opportunity to create enormous problems for us in the way they could never do with conventional military,” he warned. “We have to stay ahead and we have to stay smart.” 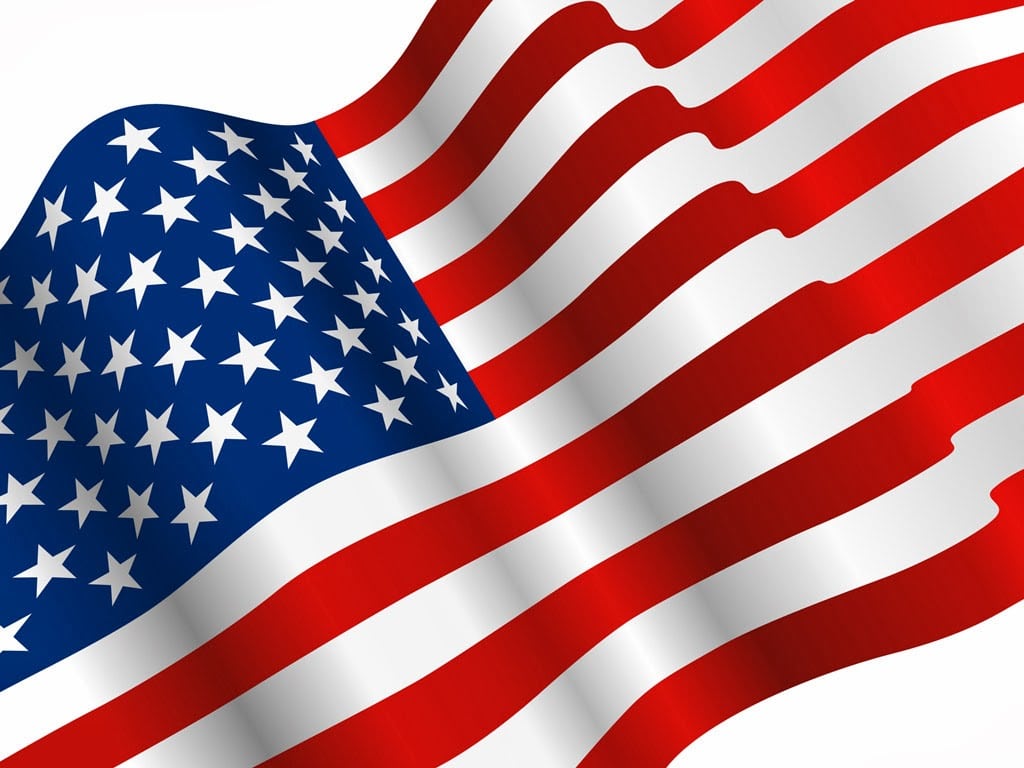 1. Which amendment granted women the right to vote?
2. What court case established judicial review?
3. Which congressional committee holds the most power?
4. Before the 17th amendment, who elected senators?
5. How many votes will end a Senate filibuster?
6. What is a pocket veto?
7. Who chaired the Constitutional Convention in 1787?
8. How does the Declaration of Independence begin?
9. How old must you be to be elected president?
10. In 1776, which king did the colonists declare independence from?

Scroll down for answers.

Maloney said the U.S. is “way behind” in addressing climate change. He endorsed carbon pricing, to “make the price reflect the true cost of the products” that exacerbate global warming.

With carbon pricing, he said, alternatives to fossil fuels, such as wind and solar, which don’t bring environmental problems but cost more money, would receive more attention because everything “gets evened out.” “There’s a lot we can do,” he said, although “in democracies, we tend not to act. We tend to wait.” As a result, he told the students, “you guys are going to deal with this, whether you like it or not.”

“I’d make every district competitive,” like his own 18th, which includes Philipstown and Beacon. He said competition motivates incumbents, “because if I’m not doing the job, you’re going to hire somebody else.” He also backed federal funding of campaigns so candidates “wouldn’t have to raise money and everybody had an even shot,” regardless of wealth. Right now, he said, “money is killing us.”

Maloney spoke of a colleague, Rep. John Lewis of Georgia, who more than 50 years ago suffered a brutal beating while leading a civil rights march over an Alabama bridge. Maloney said Lewis told him to continue pushing for equal rights, and Maloney gave the same charge to the students. Generation by generation, the responsibility “is always the same: to not be satisfied with the status quo,” he said. “It’s up to you to keep fighting. It’s young people who walk across the bridge.”

He advocated a federal law to ban employment discrimination on the basis of sexual orientation or gender identification because it remains legal in more than half of U.S. states. (Gay workers are protected in New York, and a state law that goes into effect on Feb. 26 also makes it illegal to discriminate based on gender identity or expression.) A federal law banning discrimination will likely pass the House, now controlled by Democrats, Maloney said, but “that doesn’t mean it’s going to pass the Senate,” with its Republican majority. 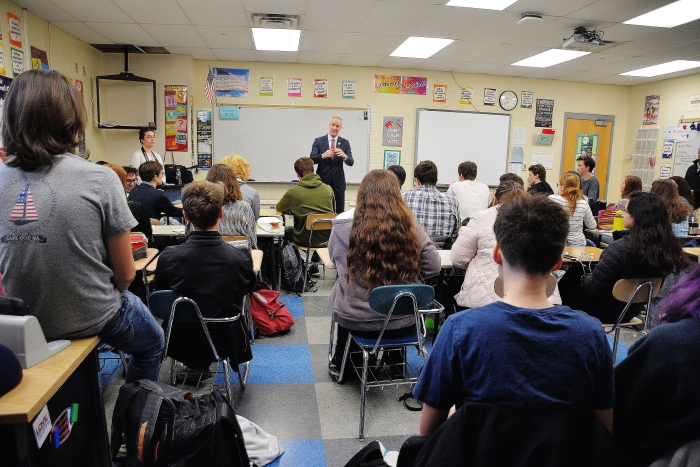 Maloney answered questions from the students. (Photo by L.S. Armstrong)

Maloney used a question about the recent partial federal shutdown to provide a quick lesson on the U.S. Constitution, which gives Congress authority over federal spending. “That’s fundamental,” he said. Otherwise, “if the president can spend money without Congress, he can become a dictator.” The shutdown began when Congress refused Trump’s demand for $5 billion to build a wall on the country’s southern border.

During the shutdown, Maloney declined his salary “because I wanted to be in the same spot as those TSA guys and FBI agents” working without pay. When seeing them at the airport, “I didn’t want them to look at me, saying: ‘You’re one of those jerks who can’t agree. You’re getting paid and I’m not.’

“I’m glad we re-opened the government” after a 35-day stalemate, he added. “I’m glad President Trump essentially caved in on that.” Congress faces the potential of another shutdown next week, when the temporary agreement expires.