The Beacon High School’s boys basketball team played strong for the first half on Wednesday night (Feb. 13) at Poughkeepsie, but the Pioneers put the game away in the third quarter and went on to win, 83–61, to close regular-season action for both teams. 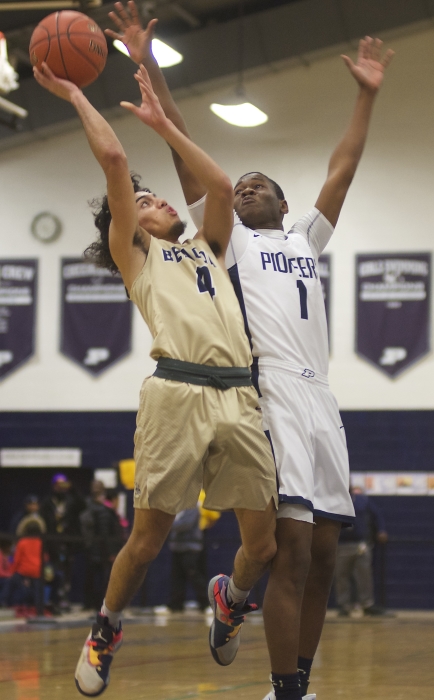 Aaron Davis (4) had 15 points against Poughkeepsie. (Photo by S. Pearlman)

Tournament seeds are based on a formula that takes into account a team’s record against Section 1 opponents and the records of the teams they play.

In Section 1 honors announced Feb. 10, Aaron Davis and Day’ion Thompson were named All-League, while Thompson also was named All-Conference and All-Section. He leads all Dutchess County players with a 20.6 points-per-game average. Beacon also received an honorable mention in the Class A rankings by the New York State Sportswriters Association for week of Feb. 12.

On Wednesday at Poughkeepsie, the Pioneers led 16-12 after a quarter. Beacon kept things close and trailed just 32–30 at halftime, but Poughkeepsie took over in the third quarter with a 27–13 run.

Poughkeepsie, which finished 17-3 and was undefeated against other Section 1 teams, is the “best team in the section,” said Coach Scott Timpano. Although Tappan Zee is undefeated at 20-0, Poughkeepsie is “a dominant team. They score in bunches, and fast.”

Timpano said a slow start after the half doomed the Bulldogs. “When you get down against Poughkeepsie, it’s very tough to get out of that hole. Our plan was to let them shoot, and in the first half it worked because they didn’t shoot that well. But in the second half they hit four three-pointers and got fast-break points.”

Thompson scored 16 points for the Bulldogs, while Davis added 15, Manny Garner had 10, and Shane Green had nine. 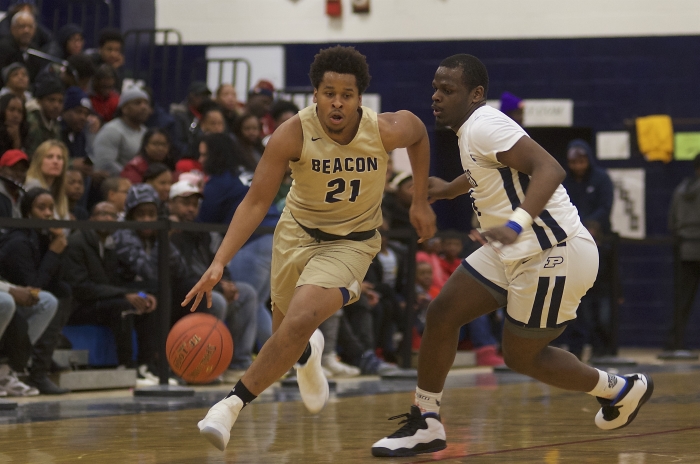 Manny Garner of Beacon drives around a defender Wednesday at Poughkeepsie. (Photo by S. Pearlman)

“Aaron and Day’ion don’t quit,” Timpano said. “They both play hard right to the last second, and they don’t allow anyone else to hang their head. And now it’s sectional time.”

He added: “Outside of our two losses to Poughkeepsie, our average margin of defeat was four points. I think we can hang with the teams in Class A. But we have to execute our game plan, and shoot well from the free-throw line. We want to force our style of play on other teams. If we do that, we have a good chance.”

There are four qualifying Class C teams in Section 1; the others are Schechter (9-10) and Hamilton (14-6), which also lost on Thursday and received the third seed to match up against Haldane on Thursday, Feb. 21. The winner will play on Saturday, Feb. 23, at Pace University against the winner of the Tuckahoe-Schechter match-up.

In Section 1 honors, Mame Diba, Kyle Sussmeier and Matt Champlin were named All-League and Champlin was named All-Conference. Haldane also received an honorable mention in the Class C rankings from the New York State Sportswriters Association for the week of Feb. 12.

The Haldane girls’ varsity closed its season on Wednesday (Feb. 13) with a 71-33 loss at Putnam Valley. The Blue Devils, who finished 5-15, will next play Hamilton High School in the Section 1, Class C semifinals on Thursday, Feb. 21, at the Westchester County Center in White Plains.

“We played a tough schedule in order to get ready for the playoffs,” Searight said. “If we shoot well and get out running, we’re a tough team to stop. This is the time of year the girls look forward to. And the County Center is like a second home, with Haldane’s history there.”

Against Putnam Valley, Bela Monteleone led the Blue Devils with 13 points and Olivia McDermott had six.

“Putnam Valley is the second-best team in Class B,” Searight said. “They are legit. We played fairly well, but our energy level could have been better, and our defense just wasn’t there at moments.”