Marc Breslav, who has an office in Cold Spring, recently celebrated 25 years as a volunteer disc jockey at the Vassar College radio station, WVKR (91.3 FM or wvkr.org). The Kent resident drives to Poughkeepsie each Thursday to host “Radio Eclectica” from 6 to 8 p.m. 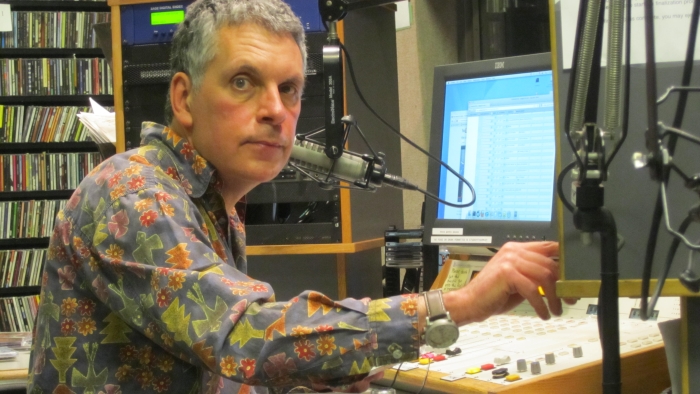 Marc Breslav at WVKR in 2014 (Photo by Arlene Seymour)

Are there limits to your “eclectica”?

It’s within the bounds of “lost” rock, blues and folk. The label allows me, forces me, to be expansive. I’ve added stuff over the years such as coverage of the passing of the famous and not-so-famous — producers, technical people, musicians. There have been so many great people passing away from the vinyl era.

How long does it take to prepare for a show?

My philosophy has been more the Buddhist principle of being an empty vessel waiting to be filled, but lately I’ve started to plan parts of the program, which takes a couple of hours.

There are two areas in which I sometimes stray: jazz and certain progressive rock such as Genesis, Yes and Emerson Lake and Palmer. I don’t particularly care for it but feel obligated to play it.

Is there anything you would call a guilty pleasure?

Bruce Longstreet, the general manager at WFMU in East Orange, New Jersey, once said that “a little bit of candy every once in a while is OK.” For me it’s “Reflections of My Life” by the Scottish band Marmalade. And I can get into “Dizzy” by Tommy Roe or “Midnight Confessions” by the Grass Roots.

What sparked your interest in being a DJ?

As a kid I’d sit with my cassette recorder and a transistor radio tuned to WABC. When a song I liked came on I’d tape it because my parents questioned the cost of buying 45 rpm singles. The first album I owned was Simon and Garfunkel’s Bridge Over Troubled Water. I liked every song and was able to convince my parents that it was cheaper to buy it than 12 singles. My radio heroes were people like [New York City DJs] Ron Lundy, Harry Harrison and especially Dan Ingram.

How does your record collection compare to the WVKR archive?

WVKR has 20,000 to 25,000 records and 50,000 CDs. My collection is just a few offbeat things I lucked into that are quite valuable, such as a record by The West Coast Pop Art Experiment Band, a 1960s psychedelic group from Los Angeles.

About 15 years ago you co-produced a series called Hudson River Radio. What was that?

We made 30-minute programs on the nature, culture and beauty of the river. There were 15 episodes, and they are still archived at wvkr.org and other places. For one segment, I spoke with Dar Williams about how the river influences her music. For another, we recorded sounds along the river. At Norrie Point Marina in Staatsburg the wind playing against the sailboats sounded so musical you’d swear it was a drummer. We even recorded the underwater sounds of the Holland Tunnel. 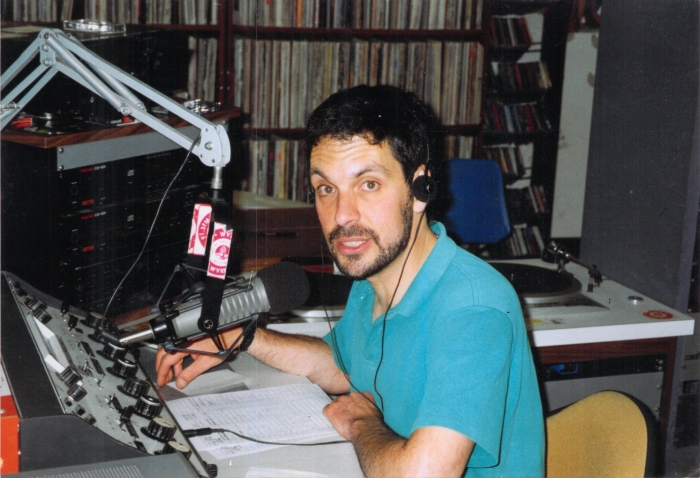 Any other memorable moments?

An interview I did with Don McLean about his Hudson River music, including “Castle in the Air” and portions of “American Pie,” stands out. He called the next day and said he wanted a copy. Also, one night I was pulled over for failing to dim my brights. When I told the officer I was coming from WVKR, he asked my name and said, “Radio Eclectica! I listen to you!” and tore up the ticket. That was cool.

Have you always volunteered as a DJ?

One week at WVBR in Ithaca I was paid $40 for covering for vacations. But otherwise, it’s all been volunteer, including in Redlands, California; Elmhurst, Illinois; Boston and at WFMU, which is one of the great surviving freeform stations, along with WPKN in Bridgeport, Connecticut. Bob Dylan alludes to WFMU in a song when he sings, “Howdy, East Orange.” WFMU had guys like Bob Fass and Bob Brainen, who were pre-internet music encyclopedias.

Donna the Buffalo
Rockin’ in the Weary Land

WVKR is a nonprofit run by Vassar. How does that work?
It has a fair number of student DJs, and students manage the station. Sean Anderson, one of the best managers in my 25 years, came back after the holidays one year and said, “Guess what I got for Christmas? The complete works of Hank Williams! There is a God!” It continually surprises me how much interest Vassar students have in what was largely their parents’ music. They still like Led Zeppelin and David Bowie.

What’s ahead for independent radio?
I’m somewhat pessimistic. A lot of colleges are selling their stations to networks because the [FCC broadcasting] license is worth a lot of money.

The music played by commercial stations is far more segmented by genre than it was in the 1960s and 1970s. Is that change for the better?
Consolidation has been the order of business for a long time. There is way more music coming out now, and that diversity is good. The problem is that the large commercial stations control too much of it. At the same time, satellite and internet radio have opened up more genres. So, it’s a mixed bag.

Has consolidation diminished the role of the DJ?
A lot of listeners like curation. We talk about the music, who performed it, give the background. That’s missing on a lot of commercial radio. They even have robotic curation. Nothing beats a live DJ who knows the music.