Montgomery: ‘Nobody wants to talk about this’

A week after Sheriff Robert Langley briefed legislators, a second county official reiterated that human trafficking occurs in Putnam County, including children who are turned into sex slaves to benefit predatory adults — including, at times, a parent.

MaryBeth Ross, prevention and community outreach coordinator for the county Department of Social Services, discussed the issue with the Legislature’s Health, Social, Educational and Environmental Committee on Feb. 21 in Carmel.

Like Langley, Ross reported that in 2018 Putnam had two human-trafficking cases that triggered federal investigations and that other cases are probably occurring. 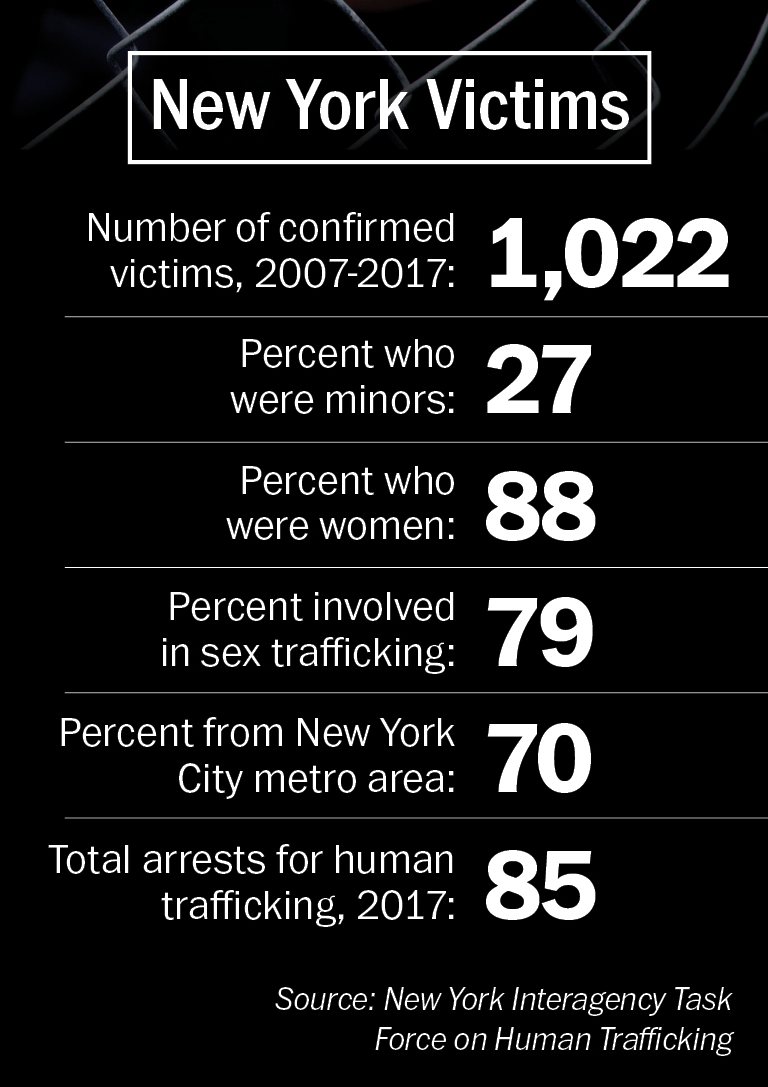 Human trafficking is “an epidemic in this country,” she said. “What we’re talking about is selling children for sex. It’s everywhere.”

Last year, federal officials, with assistance from the Putnam County Sheriff’s Office, freed a 17-year-old Montrose girl, who, they said, was being prostituted by her mother in Brewster.

Ross focused on child victims, but human trafficking more often involves adults who are compelled to work or provide sex through force, fraud or coercion. It is thought to be one of the most profitable criminal enterprises in the world alongside drug and arms trafficking.

(A day after the Feb. 21 committee meeting, the issue made national news when authorities in Jupiter, Florida, broke up an apparent human-trafficking ring involving Chinese immigrants forced to work as prostitutes. Two dozen people, including Robert Kraft, owner of the New England Patriots, and John Havens, a former CEO of Citigroup, were charged with solicitation.)

Locally, the FBI operates a task force in the Hudson Valley that works with local and state police to combat human trafficking and Dutchess County has one based in its Department of Community and Family Services.

The National Human Trafficking Hotline says it received 333 credible reports from callers in New York in 2017, and that since 2007 it has heard from more than 2,500 victims in the state. During that same period, more than 1,000 referrals were made in New York, usually by police officers, to assist victims. Eighty percent of the cases involved sex trafficking and a quarter were from the region that includes Putnam and Dutchess counties.

“A lot of people don’t believe this can happen in a small county like Putnam,” said Legislator Toni Addonizio, who chairs the Health Committee, at the Feb. 21 meeting.

“This is not something we really think about,” added Legislator Paul Jonke.

And “nobody wants to talk about this,” said Legislator Nancy Montgomery, who represents Philipstown.

Yet the victims — or “survivors,” Ross said — “are your neighbors, your kids. They are here and they are everywhere.” She added that she’s seen a recent increase of internet-related sexual exploitation.

How to Report Trafficking

Asked if human trafficking usually involves immigrants, Ross said that “83 percent of our victims are domestic.” At times, parents with financial difficulties or drug addiction “will traffic their own children,” she said. In other cases, she noted, adults act as romantic interests to entice youngsters, who are often runaways, homeless, in foster care or otherwise vulnerable. Many are girls aged 12 through 14. Some are lured by promises of cell phones, expensive purses and other luxury items, she said, and some “don’t realized they’re being trafficked.”

Moreover, some teenagers return to trafficking almost as soon as they are freed, she said. Whatever the situation, outreach workers try to talk to them, so “when they’re ready, we’re there to help,” she said.

Safe Harbour Putnam County, a program run by the county’s Child Advocacy Center and funded by the state, provides services to children who were trafficked, or are at risk of being trafficked, Ross said. She said the resources it and affiliate agencies offer include medical and psychiatric care, drug addiction treatment, emergency shelter, and legal and immigration advice.

In addition, Ross said, she and other advocates have met with school district administrators and talked with bus drivers and aides and other staff about identifying situations in which students may be at risk for being trafficked.