Joanne Giordano recently purchased a 1939 Power Wagon Dodge flatbed truck that she plans to display outside Vera’s Philipstown Market, which she runs with her mother, Vera, and brother, Dominick. 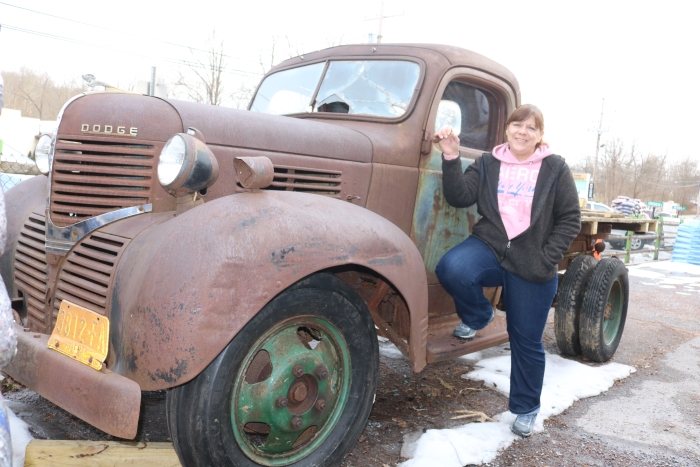 Joanne Giordano and her ’39 Dodge (Photo by M. Turton)

Why did you buy the truck?
I love American history and have a house full, and barns full, of old stuff. So many wonderful souls have touched these things, and each has a story. My husband and I do a lot of antiquing and 10 years ago he showed me a beautiful old truck outside a nursery in Yorktown Heights. I decided then and there that I had to do that on Route 9. I had to have an old truck.

How did you find the Dodge?
Someone who has been looking for a truck for me for four or five years found it upstate, two hours north, at a farm with about 15 old cars and trucks on the property, mostly from the 1950s and 1960s. I never thought I’d find one this old. When I saw it, I did a backflip! And when I realized that 1939 was the year my father was born, I knew it was a sign. The truck sat in a wooded area for the past 20 years, so hidden in brush we drove right past it. Dislodging it was difficult. It was New Year’s Eve, cold and muddy. We had to cut through thick, thorny brush. Blood was shed dealing with those thorns. The wheels were sunk a foot into the ground. It took us nine hours, but pulling it out of that woods was like watching a birth.

What did you pay?
I won’t divulge that. But God loves me and I love the farmer who sold it to me. He’s in his 70s and I’ll forever feel privileged to have something that meant so much to him, something he had since he was in his 20s. He had worked on it in a heavy equipment program in high school. When it came up for sale, he had to have it. His dream was to restore it but he wasn’t able to.

What does your mother think?
She comes from poverty in Italy. To her, old things are hand-me-downs. She sees the truck as rusty and used, but she loves that customers like it so much. One elderly lady told me, “I’ve got a ’42 and that thing will climb a tree!”

What are your plans for it?
I won’t paint the exterior, just power wash it, to keep the patina. We’re fixing the flatbed with old wood, replacing the glass and we’ll re-cover the original seats. I don’t have a name for it yet, but it’s a boy because there’s a crank to start the motor. We’re going to have a contest and have customers submit names. I want it to be something beautiful for everyone who drives by. I’ll fill it with flowers, decorate it for Halloween and for Christmas maybe put a tree in it with battery-operated lights. I want it to look like it’s been here forever. I can’t wait until the weather breaks. There’s a lot of work to do.