The roots of Beacon’s earliest black community run through a small strip of land between North Walnut and North Brett streets.

The parcel, measuring 50-by-130 feet, is the southern section of the Methodist Cemetery on North Walnut and for years was known as the Union Burial Ground, a cemetery paid for and owned by the African-American community in pre-Civil War Beacon (then called Fishkill Landing).

Our source for almost everything we know about the cemetery is the diary of James F. Brown, the gardener for the Verplanck estate at Mount Gulian and a former slave. According to his journal entries in September 1851, Brown went to the congregation of the AME Zion Church “to collect money to buy a burying ground for the colored people of Fishkill Landing and vicinity.” 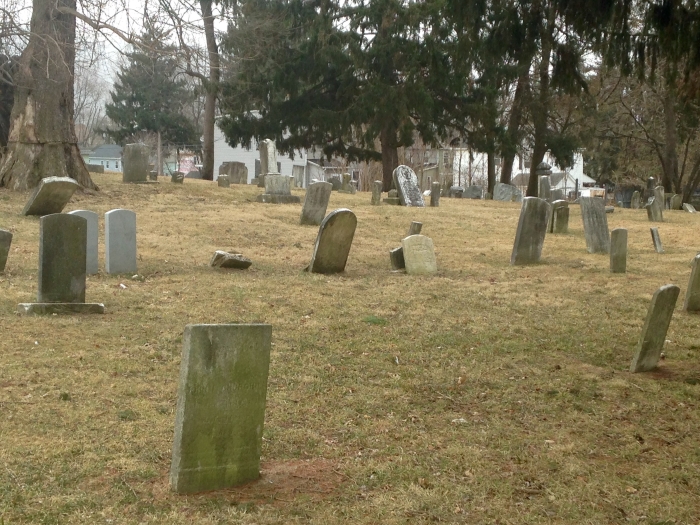 In early October, Brown paid $65 to an agent for landowner John Peter DeWindt for the parcel that became the Colored Peoples Union Burying Ground. Brown and Samuel Sampson, Edward Bush, Christian Reynolds and Samuel Gomer were named trustees. On Oct. 31, the body of J. Henry Roose was the cemetery’s first interment.

The five trustees all owned homes near the AME Zion Church and an annex of the Fishkill Landing public school created for black students. Reynolds was a teacher and the principal at the annex, which was founded in 1857 and operated until 1889.

In 1939 the Beacon City Council considered extending Oak Street through the cemetery to connect North Walnut and North Brett streets. A deed search by the city surveyor revealed that the property was still owned by the descendants of the five original trustees, not the city, and could not be paved over — a close call for preserving Beacon’s history.

Today the cemetery’s most recognizable tombstones belong to a handful of black Civil War veterans. A thorough history of Beacon’s black community has not been written, but when undertaken, it must begin in a cemetery.

Most city residents would guess (correctly) that Lafayette Avenue was named for the Marquis de Lafayette, the French ally of the colonists who is said to have visited the Madam Brett homestead during the American Revolution. 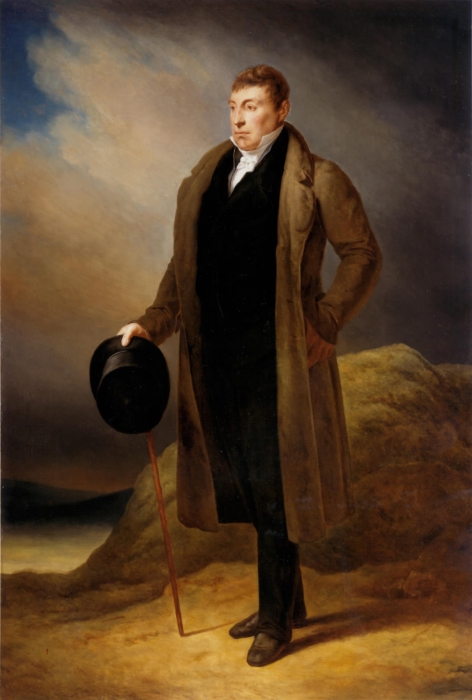 Marquis de Lafayette in 1824 in a portrait by Ary Sheffer

But the street’s location reveals that the naming is more likely tied to Lafayette’s return as the “nation’s guest” for a grand tour of America in 1824 and 1825.

The general visited all 24 states, including New York, at the behest of President James Monroe. According to one account, in September 1824, while returning by steamer to New York City, Lafayette stopped at Fishkill Landing (Beacon) to visit the John Peter DeWindt home, which was located just south of present-day Lafayette Avenue until it burned down in 1862:

“At 7 o’clock the boat came to Fishkill Landing, and the General called on Mrs. Dewitt [Caroline], granddaughter of the former President Adams, where he was courteously as well as splendidly received, amidst a numerous collection of friends assembled to greet their country’s guest.

“To add to the enjoyments of this interview, the General had the pleasure of shaking cordially by the hand another of his brave Light Infantry, adding: ‘The Light Infantry were a brave corps, and under my immediate command.’ ‘Yes,’ returned the old soldier, ‘and you gave us our swords and plumes.’ The General made but a short stay, took leave of his friends, and returned to the boat under a salute of three hearty cheers.” 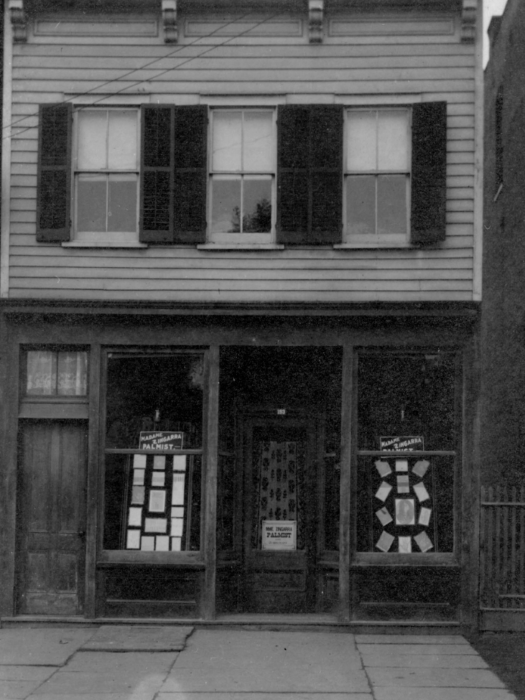 For 50 cents she would read your palm, tell your fortune and allay your fears. She called herself Madame Zingarra and she read lifelines in Beacon, off and on, for more than 30 years.

A photo postcard of her storefront at 193 Main St. (at right), shared by Beacon Historical Society member Dave Turner, was taken about 1910, the year she rented office space in Fishkill Landing. (The numbers on Main changed after 1932; today this building is BJ’s Restaurant.) A few years earlier Madame Zingarra had roamed the country with her caravan, telling fortunes and bedazzling clients with her psychic powers. In 1900, a Texas newspaper reported:

“Madame Zingarra, the celebrated palmist and lifereader, advises you upon marriage, divorce, family matters and disagreements. She can see at a glance what you want and how to attain it.… Her rare spiritual and physical gifts have made her the greatest living exponent of her weird and mysterious profession.”

Zingarra came to Beacon, usually for the spring and summer, until about 1941, setting up shop in various Main Street storefronts. After that, her fate remains a mystery.

A Lifesaver Made in Beacon 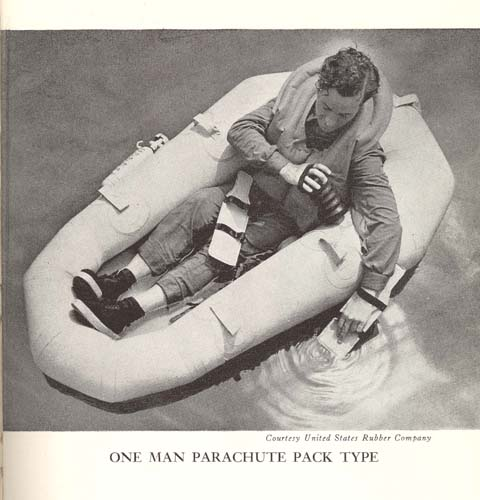 Did a one-man raft created by the United States Rubber Corp. in Beacon save President Bush? (BHS)

News coverage of the November death of the 41st president, George H.W. Bush, often included a video clip of his rescue after he was shot down during World War II.

The grainy movie footage (below), taken on Sept. 2, 1944, catches the 20-year-old naval aviator floating in a one-man rubber raft near the bow of a Navy submarine before being hauled aboard. Bush had been floating for four hours after parachuting from his burning Avenger, which had been hit by Japanese anti-aircraft fire. His parachute and the raft saved him.

There is a strong possibility the raft was made in Beacon. The New York Rubber Corp., which was one of the city’s oldest factories (having been founded in 1851), made products of all sorts, from balls to belting. During World War II, it manufactured life vests, pontoons and life rafts for the Armed Services, including one-man rafts. 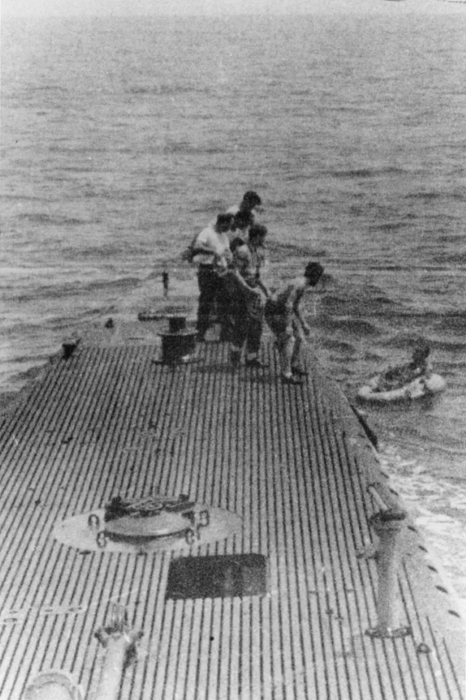 Other U.S. companies such as Goodyear, Firestone and Dayton also made the rafts. But in the early 1930s, New York Rubber was the first company to be awarded a government contract for Navy rafts after the firm secured a patent for a raft with individually sewn compartments inflated by a canister of carbon dioxide.

With its proven record for innovation and performance, New York Rubber in 1943 was awarded a coveted Army-Navy award for the outstanding production of war materials. During the war, the company’s vice president, Herschel Harris, often demonstrated the one-man raft at community functions. Harris would take out a flat-packed raft with a CO2 canister attached, pull the ripcord and throw the raft to the floor as it quickly inflated.

Harris claimed that a raft thrown out of a cockpit would be inflated by the time it hit the water. Hundreds of Army and Navy pilots were saved by this New York Rubber Corp. product.