Putnam lawmakers revisited a discussion on the fluctuating price of gas and how it compares to nearby counties during their Feb. 21 Economic Development Committee meeting.

The Most and Least

The most expensive station in the country, according to GasBuddy.com, is Suncoast Energys near the airport in Orlando, Florida, which charges $5.95 a gallon and catches unsuspecting rental car drivers who are rushing to refill. The least expensive gas, as of March 6, was $1.79 at stations in Houston.

Michael Budzinski, director of the county Department of Consumer Affairs, said much depends on the terminal where a station buys its gas, along with the location of the station. “Gas stations closer to highways are going to charge more,” he said. 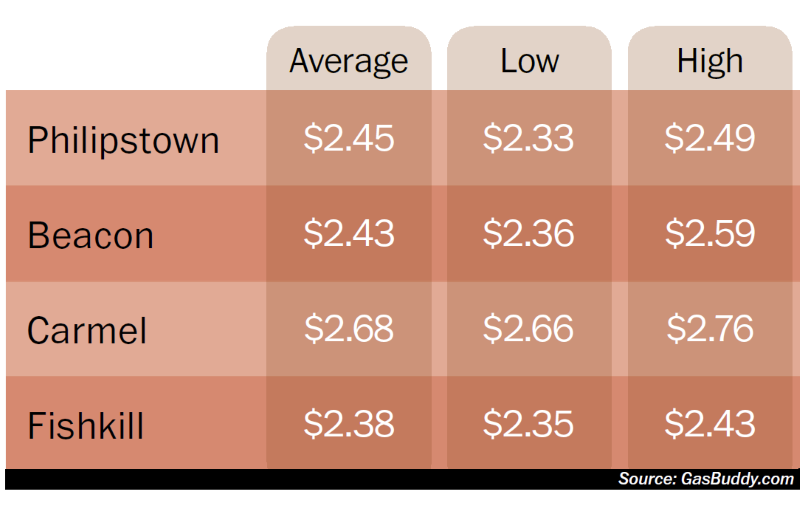 He said, overall, the prices in Putnam are “not that out of whack” with the region. Gas is generally cheaper as you drive upstate because the local taxes are lower, he said. (According to GasBuddy, the least expensive gas in the state, at $1.87 per gallon, is found at stations in Irving, in the Seneca Nation, where it is not taxed.)

Legislator Amy Sayegh (R-Mahopac Falls), who chairs the Economic Development Committee, said she spoke with a representative from the New York State Research and Development Authority who said the cost of gas is derived from competitive pricing. There are no laws that regulate gas prices except those that ban gouging during a state of emergency.

The market is internationally driven, and sources from all over the world come through New York harbor. “The wholesale price is determined by supply-and-demand, and the price of crude oil is good old-fashioned capitalism,” Sayegh said.