Is it really the same if you aren’t outside?

We are a little over a month away from the next Breakneck Ridge Trail Marathon, and I continue to ramp up my training so that I can improve my historically awful performance in last year’s race to a simply mediocre one. People have started to ask me questions such as, “You don’t really run up the vertical face of Breakneck, do you?”

My answer depends on what you mean by run. I am by no means a seasoned veteran when it comes to trail running and “ultrarunning” (50K or longer), but I have figured out that it’s better to define run as “traveling between two points as quickly and efficiently as possible under your own power.” 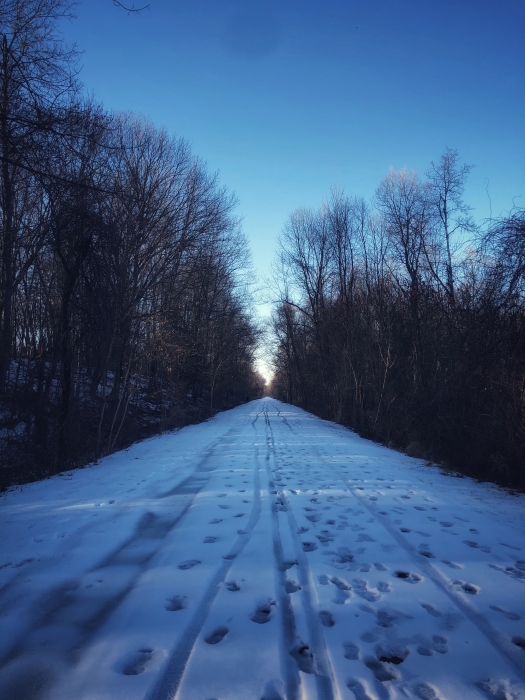 Winter, like the trail, will end eventually. (Photo by Brian PJ Cronin)

Sometimes that looks like running. But sometimes it means climbing, hiking, crawling or, as I discovered last weekend on frozen Mount Beacon, sitting, pushing off and sliding down the mountain.

Winter is a good time to take a long, hard look at what running, and exercise in general, means to you, because the conditions make everything a lot harder, including the usual slipping and falling but also the lack of food trucks and portable toilets at Long Dock Park.

This winter has been particularly tough because, paradoxically, we haven’t had that much snow. Running on a few inches of packed snow is not so bad, especially with the right gear. But with frequent light snowfalls that melt and freeze because of the rapid temperature swings, the trails and roads are covered in a weird, ankle-twisting mix of what feels like icy plastic and looks like an unflavored frozen margarita.

It’s too thin for ice spikes and too thick for snow-running shoes, which only slow down my falls just enough that I have time to decide which part of my body I want to hit the ground first.

This leads to your next question, the one you were screaming at this page right now, screaming so loudly that I actually heard you: Why don’t you go to a gym? You may even have used a curse word.

I tried that a few years ago when I was fed up with the sludge. It did not go well, although the gym was great. It was beautiful, the staff was friendly, and the snack bar served mini-burgers, which are OK for you if eaten within 20 feet of exercise equipment. The treadmills overlooked a gas station but the screens could be programmed to make it look like you were running through the Sierra Nevada, along the coast of New Zealand, or, oddly enough, the streets of Nuremberg.

Getting out the door to exercise is hard, especially in the winter, so anything that makes it easier, whether it’s episodes of The Bachelor on the treadmill’s TV or seeing your friends at the gym, is a good thing. There’s also the fact that the gym is safe, something that I, a guy who can run alone without a second thought, have been guilty of taking for granted.

But as the winter wore on, it became more difficult to get out the door. When I ran on a treadmill, I didn’t enjoy the usual post-run feeling of contentment and peace. It turned out that, for better or worse, I needed to be outside. I needed natural light and the wind and the deer and watching the seasons change, even if the extremes of each season are trying to kill me.

This became clear, toward the end of the winter last year, when I visited my parents in Florida and went for my first run in weeks, in 90-degree heat. I lasted 15 minutes before I was dehydrated. I felt like I had been hit by a truck. It was the best I had felt in months.

I ended my gym membership as soon as I got home. They were understanding. “We could just pause your membership and start it up again next winter.”

“I’m never coming back,” I said. It was the closest I’ve come to breaking up with someone, and I still feel bad about it. But there are no regrets. My gym-tolerant friends may be warm and dry but they are missing the light as it extends a few minutes more each morning and evening and the cacophony of birds slowly grows louder. Soon enough, the slush will become mud and the mud will become dirt and running will feel like running again.