Revisions made, but opposition to project remains

The Beacon Planning Board will hold what could be the final public hearings next month on a developer’s proposal to build six 4-story townhouses on the half-acre “Welcome to Beacon” site across from the Metro-North station.

The hearings — for subdivision and site plan approval — are typically among the final steps before a project is approved. The proposal, called Ferry Landing at Beacon, returned to the Planning Board agenda on Tuesday (March 12) for the first time after its public hearing for environmental review began in June.

As before, most of the feedback this week was critical.

The developer initially proposed that each townhouse would have a one- or two-car garage, but the plans were modified to include a 15-foot setback on the fourth floor to reduce the buildings’ visual impact, project representative Tom Elias said. The garages would remain, although Planning Board member Jill Reynolds suggested removing them and reducing the buildings to three stories. 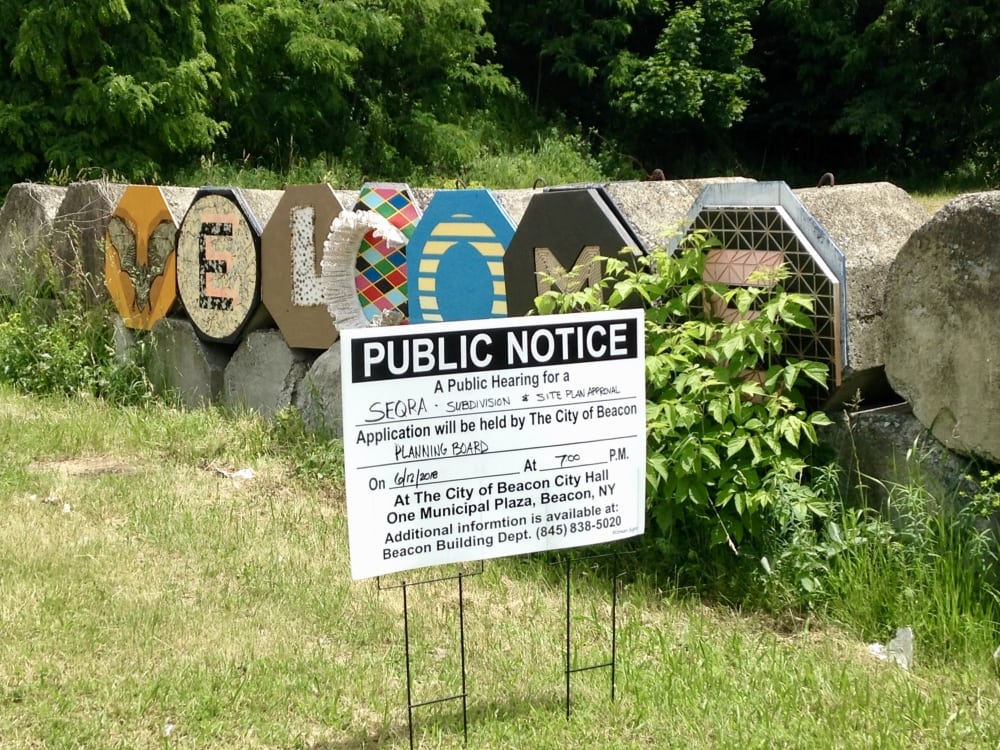 A sign posted last year at the “Welcome to Beacon” wall announced a public hearing for the proposed development of the site. (File photo by J. Simms)

The revisions weren’t enough to make the project palatable to several neighbors.

“No one’s opposed to a landowner maximizing what he can build on his property,” said Charles Kelly, a nearby resident and former City Council member. “That’s not what this is about. It goes beyond what would impact the neighborhood. At the doorstep of the city we need to be very conscious of how we welcome people.”

City Council Member George Mansfield, who in 2010 helped create the Welcome to Beacon rock wall on the site, said the project “aligns perfectly with the principles of transit-oriented development” and will bring density close to the city’s primary transit hub.

“This is where the density needs to be,” he said. “This is a project that will represent Beacon well and still be a ‘Welcome to Beacon.’ ”

The environmental public hearing was kept open after this week’s Planning Board meeting, so three hearings will be held concurrently when the board meets again on April 9.

While the City Council asked the Planning Board to review Verizon’s application to install a small-cell wireless facility onto a 52-foot pole on private property at 110 Howland Ave., a consultant on Monday (March 11) told the council that the unit would help meet the “justified” need for wireless coverage in Beacon.

There are “substantial voids” in Verizon’s coverage, particularly for people in cars and buildings, consultant Michael Musso said. The Howland site will also provide coverage if the company goes through with plans to remove its wireless tower on Mount Beacon, he said.

Musso added that the radio frequencies produced by the new facility would only be a fraction of what the federal government allows. “You should know what’s going on,” with radio frequencies, he said, “but this one’s a bit of a yawn.”

Applications for a microbrewery with an arcade and event space and an addition to the Melzingah Tap House for outdoor music moved closer to approval on Tuesday.

Melzingah, which opened at 554 Main St. last year, has its first music act scheduled for next month. Representatives from the brewery will return to the Planning Board this summer to discuss neighbors’ feedback on the music and expansion.

The first public hearing for the revised 248 Tioronda project will continue next month. The proposal, which now calls for 64 apartments along with commercial space along Fishkill Creek, must return to the City Council for review after the Planning Board certifies its environmental compliance.