I am writing this to you from a 30-minute device session I’ve negotiated with my children. They get 30 minutes playing Plants vs. Zombies on the Xbox, and I get to start writing this.

Pre-planned “sessions” are how we roll when I work from home with the kids. This includes Play Time or Outside Sessions. When we’re done, we announce Devices Down — and they call me on it if I’m texting or Instagramming while making dinner (not a good combo).

This system came out of necessity. My children were binge-watching everything, from Netflix shows to YouTube, and it was causing problems, like desperate yearnings for Shopkins and Orbi Spas, or forgetting to eat.

When it was time to turn the television off, or to put a device down, a major rage erupted (and still does). I learned I needed to warn them in advance. They couldn’t take it. Even though “pause” is a button, it didn’t matter. They needed the story now — and the next story, after it auto-started.

Parents of teenagers also tell me of this rage. We talk about the YouTube video addiction, and my friends look at me in horror at the idea of telling their teenagers to turn off technology. Our devices have become giant pacifiers for adults, teens and children, and they have threaded into our brains with a deep grip.

What I didn’t realize was that the “simple” games my children endlessly beg me to download usually come with chat functions. Take soccer, for instance. Simple enough. But random people were sending messages from who knows where to my 6-year-old son.

Comments are another thing causing actual harm. Google finally had enough and shut down comments on videos featuring children. Professional YouTubers ask their viewers to comment, because comments lead to more viewers, which leads to more ad revenue. Every time you watch, the most popular YouTubers get a little cha-ching. That’s why so many people want to make videos, myself included! (Check out my #MothHunter series — I hunt for pantry moths — invite me over!)

Sadly, too many bullies and predators also live in the comments. This is what prompted Google to just shut them off. 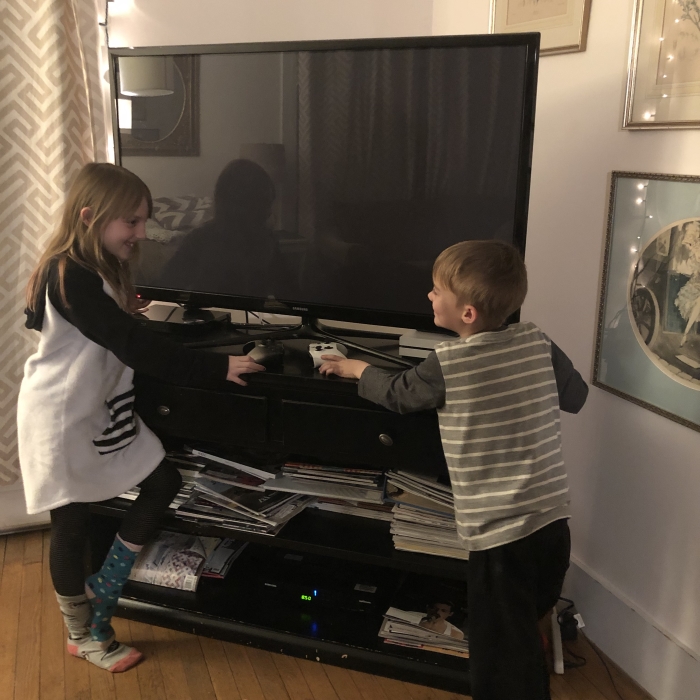 “Can they do it? Can they turn the TV off on their own?” (Photo by K. Martin)

Parents can buy devices that shut off other devices, like a light-timer. But my goal is to teach and nurture self-discipline. Addiction doesn’t respect mediums. It happens with opioids, alcohol, food, sugar, gaming, watching.

My hope is that if I teach the reason for shutting off devices, the moderation muscles in my children’s brains will get stronger. It’s hard to turn off something that you love, especially if it’s auto-looping and sucking you in with new content.

Devices Down gets easier if my children understand why it must be done. I tell them everything in the news about Facebook, such as the data it collects and its Russian trolls. My 6-year-old listened to Mark Zuckerberg testify to Congress and was not impressed. They know about Google’s comment ban.

Now we’re learning about how long-term screen use can cause damage to your eyes — that mystery blue light that kills your sleep by blocking the sleep hormone melatonin. Lately I’m getting a good response when I say: “Devices down! It’s actually burning your eyeballs!”

Still, it’s a work in progress, a continuing challenge. But I’ll leave you with this thought: as I finished writing this column, Facebook and Instagram broke. That is, the platforms broke, everywhere, for an entire day. Liberating, wasn’t it? Outside time, penning a letter and the old-fashioned reading of newspapers is getting closer and closer to becoming the new, old normal.