Montgomery clashes with other legislators over state law

Putnam County’s meeting room turned into a crowded debate chamber Monday (March 18) as residents clashed with legislators and each other over a new state law dealing with abortion and Legislator Nancy Montgomery (D-Philipstown) defied her colleagues by defending it.

William Gouldman (R-Putnam Valley) the remaining committee member, abstained, without explanation. The committee vote sends the draft to the full Legislature for consideration at its next formal monthly meeting, on April 2. Montgomery is the sole Democrat on the nine-member Legislature. 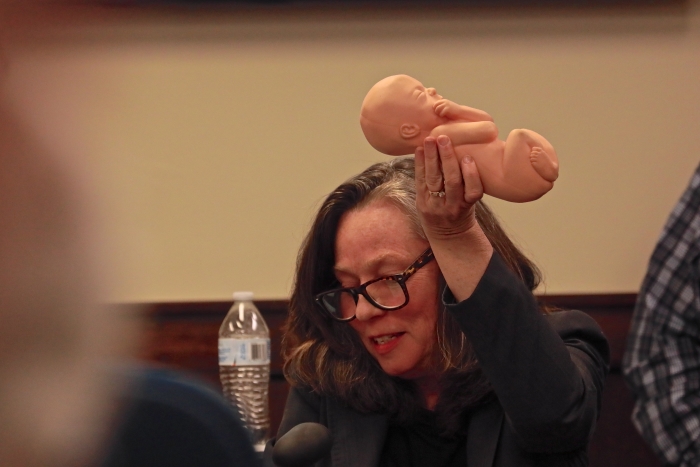 Linda Cochrane of the Hopeline Pregnancy Resource Center held up a plastic fetus during her statement in support of a resolution condemning a new state law. (Photo by Ross Corsair)

Gov. Andrew Cuomo signed the RHA into law in January after it passed the state Senate and Assembly. It revises the state criminal code, which had allowed someone who attacked a pregnant woman to be charged with criminal abortion, akin to homicide, if the assault killed the fetus after 24 weeks’ gestation. With the change, “homicide” in the criminal code refers specifically to a “human being who has been born and is alive.”

The law also allows licensed and certified health care practitioners — not just doctors — to perform abortions and eliminates a requirement that a second doctor monitor an abortion at 20 weeks’ gestation or later in case it results in the birth of a child who would die without immediate medical care.

Drafted by Robert Firriolo, the Putnam Legislature’s lawyer, the proposed resolution asks the state to repeal the RHA. The resolution claims that the RHA will make abortion more common but less safe; that allowing a late-term abortion to safeguard the woman’s health — not just her life — means a pregnancy can be terminated for almost any reason, including travel; and that removing abortion from the criminal code could “allow violent criminal acts to go unpunished.”

“Our life begins when our hearts start beating,” argued Addonizio, who chairs the committee. “Many people agree that abortion shouldn’t be allowed to stop a beating heart.” She acknowledged a county legislature “can’t reverse” the RHA, but said it can express its opposition.

“It’s important to have our voices heard,” added Legislator Ginny Nacerino (R-Patterson), who sponsored the resolution. She recalled Catholic cardinals’ pledges to aid women with unplanned pregnancies and asserted that for Cuomo “to codify this legislation while proclaiming himself a Catholic is a travesty.”

Denouncing the RHA, she cited her belief that “the majority of Putnam County residents stand shoulder-to-shoulder with me on this. I cannot comprehend any rationale justifying this diabolical legislation. It is an atrocity to mankind.” 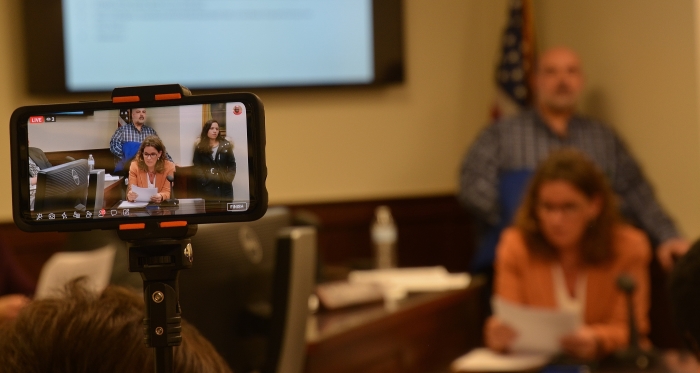 Like Nacerino, other legislators not on the Health, Social, Educational & Environmental Committee attended its meeting and informally endorsed the draft resolution.

In response to Nacerino’s comments and the witnesses, audience members, including Kathleen Foley, a resident of Cold Spring, accused the committee of religious evangelism or of only hearing witnesses whose views reflect its own.

“I find it distressing we’re quoting Catholic bishops,” Foley said. As legislators, “you have a responsibility to separate your personal beliefs” from county business. “You’re proselytizing at a public meeting,” she complained. “If you pass this, don’t do it in my name.”

Nacerino responded that voters “entrust us to vote the way we think, to the best of our ability.”

The committee heard remarks at length from the audience, which seemed equally split between RHA opponents and supporters. 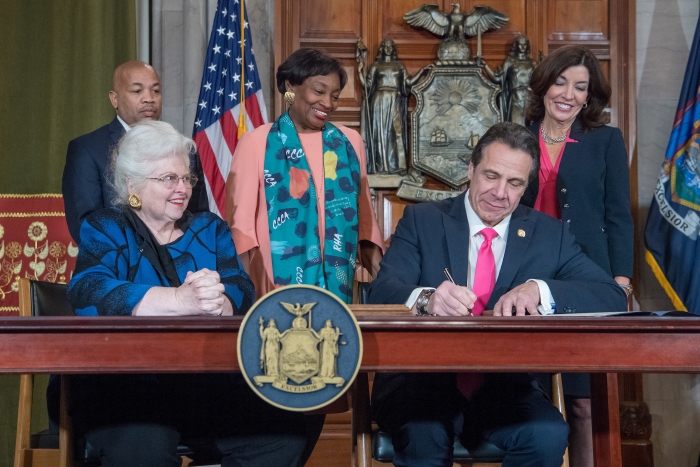 “As lawmakers, we are charged to support our people,” she said. “For this Legislature, which has done nothing to provide service for reproductive health care, to be proposing this” resolution is troubling, she continued. “Access to reproductive health care,” even to obtain a birth control prescription, is “hard to find. There’s not one clinic in Putnam County.”

Sayegh shot back that “I shop at Macy’s, and there’s no Macy’s in Putnam County.”

Montgomery also emphasized that “any infant born alive is a person; therefore … they’re protected. Any propaganda saying we’re committing infanticide is just wrong. It is cruel and wrong. I ask that before we send this [resolution] to Albany, we really consider what we’re saying and get it right.”

Joseph Castellano (R-Mahopac), who chairs the Legislature, said critics “have from now until April 2 to rally people who agree with you.”