Alvin Bell, 84, has been a barber on Main Street in Beacon for 30 years. 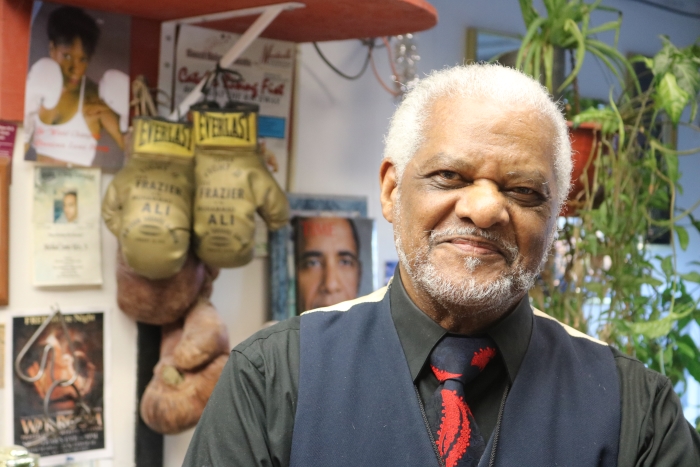 Where did you grow up?
I grew up in South Hill, Virginia. We were sharecroppers. My father grew 10 acres of tobacco; that’s a lot! It was backbreaking work. I was in the fields from when the sun came up until the sun went down, 18 hours a day. I wasn’t paid but we got enough money for food, school clothes and the like. When we were kids, we didn’t have the 25 cents for a haircut. I was about 8 or 10 years old when my mother had me cut Mr. Jones’ hair. It looked pretty good! Then I cut his kids’ hair, then Mr. Brown and his kids’ hair, then my brother’s hair and our friends’ hair. I used shears, hand clippers, nothing electric. That’s how I learned the trade.

How did you end up as a barber in Beacon?
I boxed in high school, as a middleweight, like Sugar Ray Robinson. I was good, with a hard right. If I had been coached, if I could have come to New York City, maybe I could have made it. I graduated from Mecklenburg County High School after grade 11. I did odd jobs with my brother, like cleaning yards for white people, and saved my money. Soon after I turned 20, I got on the first train north to Beacon. I had relatives here and wanted a job. I’ve been here 62 years.

I worked for seven years at Beacon Piece Dye, a textile company, then went to work at Nabisco for 27 years. [The factory is now Dia:Beacon.] I’m a pressman by trade. I don’t want to brag but I worked my way up to become the top pressman. I made $15 an hour and later with overtime as much as $40,000 a year. When Nabisco closed I opened my barber shop. It was like a miracle; cutting hair just came back to me. Tobacco was backbreaking but there’s nothing hard about being a barber. People are good. It’s one of the best trades in the whole world. My son Michael and my grandson Michael are both barbers, too.

Well, Pete didn’t have a lot of hair to cut! I would call him “Mr. Seeger” and he would say, “Don’t call me that, my name is Pete!” We did a lot of stuff together, sang together. One time, not long before he died, we were going to perform at the big church on Wolcott Avenue. He said: “Al, we have to rehearse, you know. Where are we going to rehearse?” So, we rehearsed right here in my barber shop. I’m not making that up! We packed the church.

Who are your customers?
My business is rated five stars. To be a good barber you just have to satisfy the customer — young and old. The people you meet would blow your mind. Beautiful people. I just got a letter from a woman in Italy who was here. A guy came in the other day who’s lived here more than 20 years and didn’t know I was here. First thing he said when he sat in the chair was “I feel so comfortable here.” Young people come here, and they come back. I’m picking up a lot of newcomers to Beacon. I have as many white customers as I do black customers. Men and women. People know my work; I’m good. I even do traditional hot towel, straight razor shaves. My hands are still smooth. I’m also a very spiritual person; I’m a deacon at Springfield Baptist Church. A lot of brothers and sisters come here and we get right into Scriptures and the Bible. And we talk politics and baseball. I’m a Mets fan.

Do you plan on retiring?
I just saw an article about the 107-year-old barber in New Windsor. I want to go meet him, talk to him. I figure I have another 20 years of barbering left in me.

One thought on “5 Questions: Alvin Bell”