After 40 years, BJ’s still has the pig, the cow and the fish

Barbara Sims often begins her morning cleaning 50 pounds of fish, to be consumed that day by diners at BJ’s Restaurant, the soul-food destination she has operated on Beacon’s Main Street for more than 40 years.

The lifelong city resident had worked the night shift at the Montrose campus of the Veterans Affairs hospital for 20 years when she opened the restaurant in 1978. A decade of double duty followed. Her mother, Thelma Humphrey, helped out for several years by opening the restaurant at 5 a.m.

“At first I only sold coffee and hamburgers,” Sims recalls. “I grossed $65 a day. It was a poor area then.” 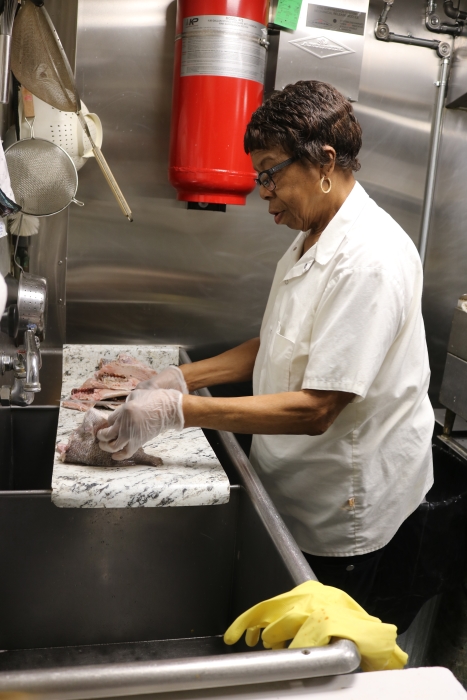 One day a customer helped Sims expand the menu. “This lady came in and said, ‘There’s nobody here. You need to have a fish fry!’ ”

Sims bought 10 pounds of fish and stuck a makeshift sign in the window. Within two hours, the place was packed, she says, and about an hour after that, the fish was gone.

Whiting is still BJ’s signature seafood, along with porgies and tilapia, and fish and grits is a popular breakfast item.

The desserts are made on-site. “My daughter Brenda bakes our sweet potato, apple, cherry and peach pies,” Sims says. “Throw some vanilla ice cream on it … and you gain 10 pounds!” The cakes Barbara bakes each day sell out. (BJ’s takes its name from the initials of the mother-daughter team: Barbara Joan and Brenda Joyce.)

“Soul food is part of my heritage,” Sims says, and cooking it well requires “time, patience and a clean kitchen.”

She could save time by cooking 10 pounds of chicken at once but says she wants every order prepared fresh. “If someone gets smart because they are impatient, I tell them I can give them their porkchop raw, or I can cook it,” she says, with a laugh. “I sometimes run off at the mouth!”

Customer attitudes have changed over the decades. “In the early years it was hard to please people,” Sims recalls. “If you gave them a plate of food, they always wanted more.” She finds today’s diners more accommodating. “If they come in on the weekend and it’s busy, they get a beer or wine or soda and relax,” she said. “They tell me the food is worth waiting for.” 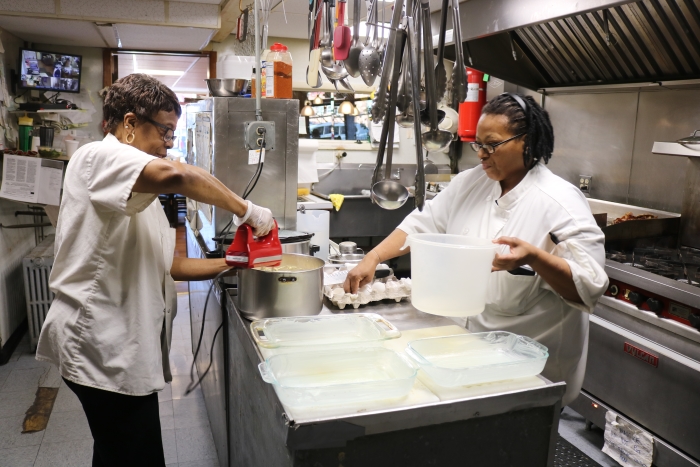 Sims says she has witnessed a healthy change in the city, which had as many as 20 bars when she opened for business. “Young people used to buy 40-ounce beers and sit around on the weekend drinking all day,” she says. In the early morning, young men did battle across Main Street, throwing the large, empty bottles at each other. “By 6 a.m., store owners and the fire department had to sweep all the glass off the street so people could park.”

Sims had to replace the restaurant’s picture window numerous times during her first year. “Thank God for the Beacon police,” she says. “They cleared all that up.” Now, people can sit out at night and quietly have a beer. “It’s a nice sight. And it’s much safer.”

BJ’s has welcomed its share of celebrities over the years. Cast members from the TV show Good Times often ate there. The Rev. Al Sharpton and a steady stream of lawyers were frequent customers during the infamous 1988 Tawana Brawley case. 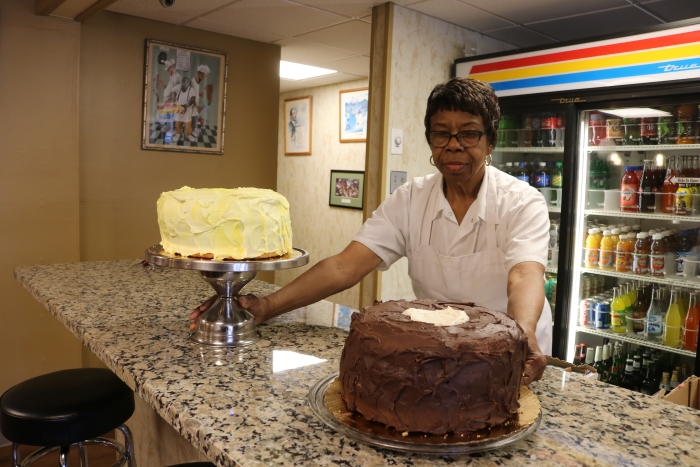 But Barbara’s favorite? “Pete Seeger was my best customer; he came in here for years.” she said, adding that Seeger often played his guitar or banjo in the restaurant. And his lunch order was consistent. “He liked fish and wheat bread and a lot of collards. It was good to have him here, very good.”

Brenda Sims served as a master sergeant in the U.S. Army, then worked in a Niagara County law office after earning her J.D. from SUNY Buffalo. She retired in 2004 and has worked at BJ’s ever since.

“I like the customer-service aspect,” she says, adding that she has never worked harder in her life.

Brenda said her mom loves BJ’s, its customers and the community. “This place is her life; she’s worked hard, seven days a week, for 40 years,” she says. “I can’t keep up with her — but I’m not about to tell her that!” Brenda was also emphatic that the restaurant couldn’t survive without its other five employees.

When asked when she might retire, Barbara, who declined to divulge her age, laughs and says: “I am retired. I’m happy, everything is good. I’m not mad at nothin.” The restaurant “was just something to keep me busy, but it got out of hand!”

One thought on “The Soul of Main Street”