“Our strengths will be pitching and defense — and some timely hitting”

The Blue Devils opened their season at home Monday (March 25) with an easy, 20-0 victory over Eastchester behind the pitching of junior Shianne Twoguns, who went five innings and allowed one hit while striking out eight.

“Shianne threw the ball very well,” said Coach Nick Lisikatos of his co-captain. “The emotions were running on opening day, but she worked hard finding spots. We’re always working toward fewer walks [Twoguns gave up four] and learning to find the corners.” 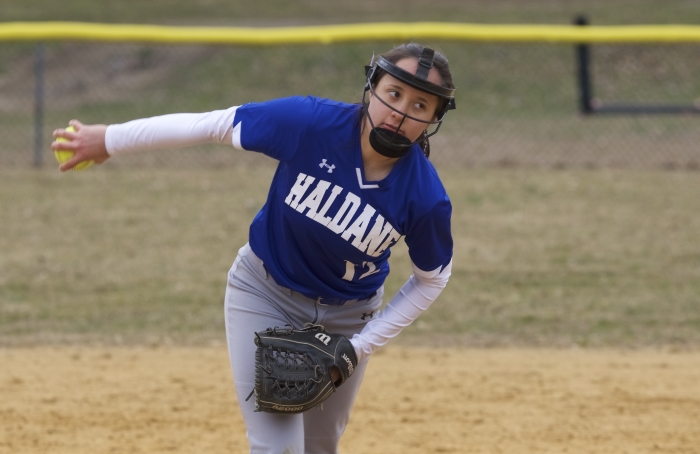 “We haven’t seen much live pitching, but we had a plan to attack the strike zone,” Lisikatos said. “Some of them need to be more patient, and some need to be more aggressive.”

He said junior Athena Stebe-Glorious did well in her first start in right field. She finished with three stolen bases, two hits and two putout throws.

The Blue Devils return nearly their entire lineup from last year’s team, which finished just under .500 and lost in the first round of the Section 1 playoffs to eventual champion Pawling.

“Our expectations are to win a state championship,” the coach said. “We want to get into sectionals, win some games and then anything is possible.”

The team will be looking to Twoguns, Mikalsen, Platt and Monteleone to provide offense at the top of the lineup.

“They’ll be our catalysts,” Lisikatos said. “Our strengths will be pitching and defense — and some timely hitting.”

The Blue Devils were scheduled to host Beacon at 4:30 p.m. on Monday, April 1, before traveling to Peekskill on April 2 and Palisades Prep on April 4.