If a woman’s work is never done, there will be plenty to sing about at the fourth annual Women’s Work Concert, an April fixture at the Howland Cultural Center.

The gathering of women vocalists singing songs written by women, which begins at 2 p.m. on Sunday, April 7, is timed to coincide with Women’s History Month and will benefit the Beacon Sloop Club. The theme is “sisterhood of harmony.”

The concert was produced and will be hosted by Lydia Adams Davis. After a childhood marked by frequent moves — her father was a private school headmaster — she experienced what she describes as a life-changing moment when, at age 16, she met Pete Seeger. He told her: “If you have the blessed skills to be a singer and songwriter, you can share this humanity with people all of your life.” 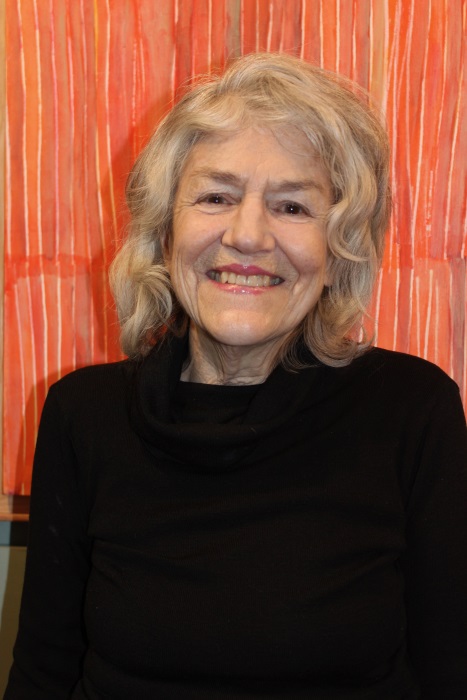 Lydia Adams Davis in front of a painting by Barbara Smith Gioia (Photo by A. Rooney)

Davis was an elementary school music teacher for years while raising her daughter, who is a jazz singer now based in Switzerland. But after earning a master’s degree in special education for the deaf and hard of hearing, she shifted to educational performance, frequently working on material which engaged her young audiences through participation and on-the-spot improvisation.

She still employs those methods in programs she brings to libraries, camps and schools. She has also created programs on Susan B. Anthony and Victorian-era women and is completing one about Abigail Adams, whom she calls her “ancestor’s wife.”

Davis also has released four CDs, two for children and two for adults.

She got to know the Hudson River after her father took a job at the Storm King School. She remembers taking the ferry to Beacon, riding on the Mount Beacon Incline Railway, and taking trips on the Hudson Valley ferry line.

“That was always exciting,” she says. “On one trip, I saw an empty Nedick’s orange soda bottle floating in the Hudson. That started my concern with the polluting of the river.”

After years spent touring, working in arts and folk festivals, and conducting songwriting living history and teach-the-teacher residencies in schools, Adams gave it all up in 1990, when her mother, who lived in Cornwall, required full-time caregiving.

She still managed to do occasional shows, including at the Howland Cultural Center and moved to Beacon in 2013. “It was my dream to come here,” she says.

In 2015, “somebody got the wise idea of getting a group of women together to interpret music written by women,” Adams recalls, and it grew quickly from there.

The Howland Cultural Center is located at 477 Main St. Tickets are $15 at brownpapertickets.com or $20 at the door.