Three months and 3,000 miles ago, I was sitting in a cabin filled with dozens of trail runners on an island in the Pacific Northwest.

It had taken me a few days to get here, and along the way, when I mentioned to anyone that I was from Beacon, they typically would stare at me blankly until I said, “It’s an hour and a half north of New York City.”

By contrast, when I told other trail runners where I was from, many immediately smiled.

“I’ve been to Beacon!” they said. “I went there to do the Breakneck Run.”

On Saturday, April 13, Red Newt Racing will put on the fourth annual Breakneck Point Trail Runs, a marathon and half-marathon that make their way through the steepest elevations in the Highlands. 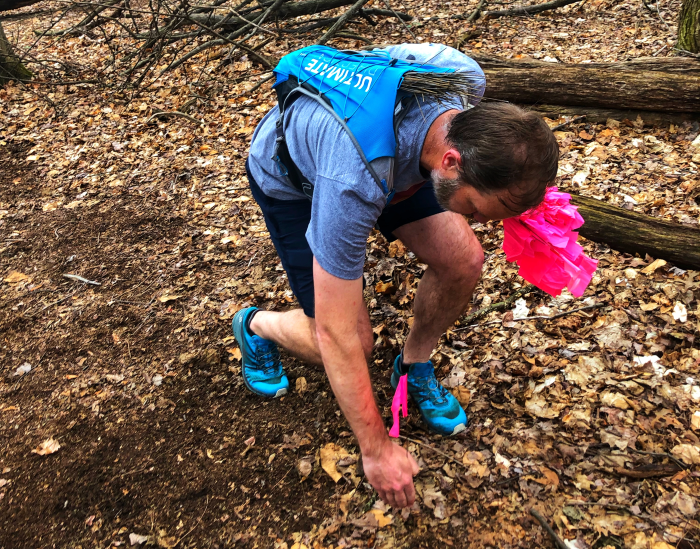 Ben Drew begins marking the course for the Breakneck Point Trail Runs. (Photo by B. Cronin)

Almost entirely by word-of-mouth, the run has gained a reputation as one of the most brutal and beautiful races around. Its co-director is Ben Drew, who lives in Cold Spring. He said the reason the race has become popular is its name.

“Going up Breakneck is a big draw,” he said. “You and I probably take it for granted, but going up for the first time during the race is spectacular, especially this time of the year when there aren’t any leaves on the trees.”

There’s also the bagpiper — this year it will be James Hartford, also of Cold Spring — who serenades runners as they ascend the first summit.

As great as the views and music are, you don’t get to experience them until you’ve done some serious climbing. That leads to the second reason for the race’s wide appeal: The extraordinary amount of “vert” (vertical gain) that runners must endure.

“Even though the highest points aren’t all that high, it’s relentless,” said Drew. “You’re going straight up or straight down the whole time.”

The most prestigious ultra-marathon in our area is the 50-Mile North Face Endurance Challenge at Bear Mountain, a race that Drew has run and will run again next month. The best trail runners in the country every year ascend and descend Bear Mountain and the highest, toughest trails throughout Harriman State Park for 6,880 feet of climbing.

And yet the Breakneck Marathon, with about half the distance, has between 8,000 and 10,000 feet of elevation. “For a marathon, that’s unheard of, especially on the East Coast,” Drew said. 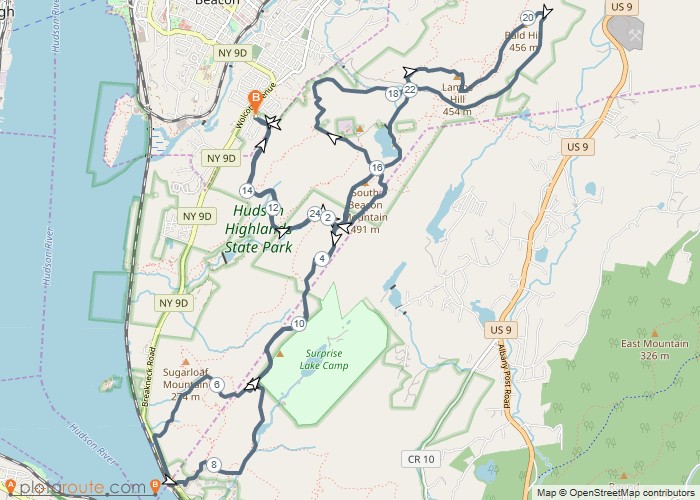 A map showing the route of the marathon; click image to view interactive version (Mapping by Ian Golden)

Drew and the race’s other director, Ian Golden, tweak the course from year to year to have a road-accessible aid station every 5 or 6 miles. Mount Taurus (Bull Hill) will not be part of this year’s course because there weren’t enough volunteers to crew these stations, Drew said, so the majority of the run will be on the Dutchess side of the mountain.

Runners will begin at the University Settlement Camp in Beacon and head up Mount Beacon’s rocky south side to the fire tower, an infamous scramble nicknamed the Devil’s Ladder. It’s one of Drew’s favorite parts of the course. “You have these nice views, but it doesn’t have the cachet of Breakneck, so not a lot of people know about it or go up that way.”

From the fire tower, runners will head south along the ridge, dropping to Route 9D at the Wilkinson Trailhead before making the namesake climb. After summiting Breakneck, the course backtracks on the south of the ridge and returns to the Settlement Camp, where half-marathoners will put their feet up and crack open a beer while the rest of us ascend the Devil’s Ladder a second time.

For the second half of the marathon, the course turns north, hammering down the Mount Beacon Casino Trail and cutting over to Dry Brook Falls on the Pocket Road Trail. Runners will top out near The Pines and head up Fishkill Ridge for a loop around Lamb’s Hill and Bald Hill. It’s (mostly) downhill from there, passing the reservoir before dropping into Squirrel Hollow and the finish line at Settlement Camp.

As in years past, Drew will be too busy to run the course himself, but he has invaluable advice for first-time participants.

“The first few miles could be runnable, especially if you’re in good shape,” he said. “But if you do, you’re going to kill yourself before the big climbs.”