The Haldane High School baseball team struggled on Tuesday (April 16) on the road, falling behind early in a 13-2 setback at Ardsley. The Blue Devils had notched their second win of the season the previous Thursday with a 7-2 decision at Schechter.

In Tuesday’s five-inning loss at Ardsley (5-2-1), the Class A Panthers jumped on Haldane starter Alden Dobosz and scored all their runs in the first three innings. Adam Hotaling came on in relief to pitch two scoreless frames for Haldane (2-5). 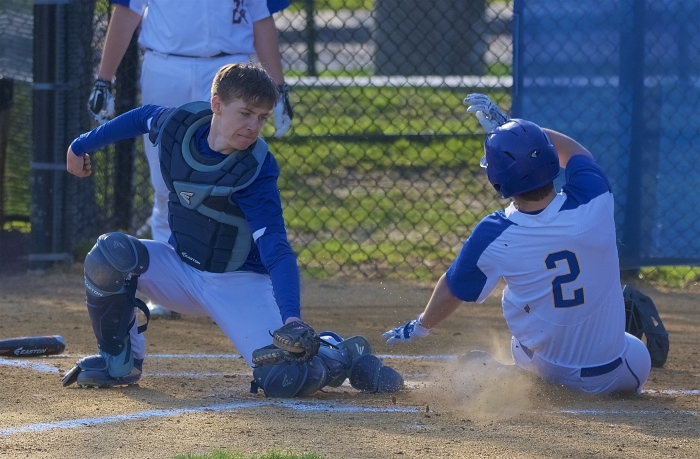 An Ardsley runner beats the tag at the plate by Haldane catcher John Bradley. (Photo by S. Pearlman)

Dan Santos went 2-for-2 at the plate in the loss. “We hit the ball, but we just couldn’t string hits together,” said Manager Simon Dudar. On the mound, “Alden may have been in the zone a little too much early on, but they are a good-hitting team.”

At Schechter, in Hartsdale, Dobosz earned the win, allowing two earned runs in five innings. Hotaling pitched two innings of relief, and went 2-for-4 with a homer and a double at the plate. Kole Bolte and Matt Mikalsen each went 2-for-4 with one RBI, and John Bradley was 2-for-3. Freshman Blake Bolte also came up with his first varsity hit.

After seven games, there’s visible progress, although the team remains “a little inconsistent,” Dudar said. “We’re trying to pull all the facets of the game together. When we do, we’re a good team. But when we’re not, it falls apart on us. But the guys are still having fun.”

Haldane, which dropped an 11-0 decision to Putnam Valley on April 12, was scheduled to host Riverside on Saturday, April 20, at noon and Peekskill on Monday at 4:30 p.m.