While the Putnam County Legislature earlier this month condemned the state’s Reproductive Health Act as “authorizing infanticide,” lawmakers on the west side of the Hudson, including Jonathan Jacobson, whose district in the state Assembly includes Beacon, this week offered their support for the Title X Family Planning Program that funds reproductive health care for low-income people.

On May 3, the Trump administration will implement what it calls a “Protect Life Rule” and what Planned Parenthood and other activists refer to as a “gag rule” that will forbid doctors who receive funds from Title X (10) from telling patients where they can obtain an abortion. It also would remove a requirement that a clinic inform women about all their options, which could make anti-abortion and religious-based providers eligible for funding.

According to Planned Parenthood, the rule will also make it impossible for women who visit clinics funded by Title X to obtain birth control or preventive care, and it will force doctors to give patients incomplete information about their health care options.

Title X provides about $286 million for programs at 4,000 clinics that serve four million patients annually, many of them poor. Planned Parenthood operates about 40 percent of the clinics that receive Title X funding. 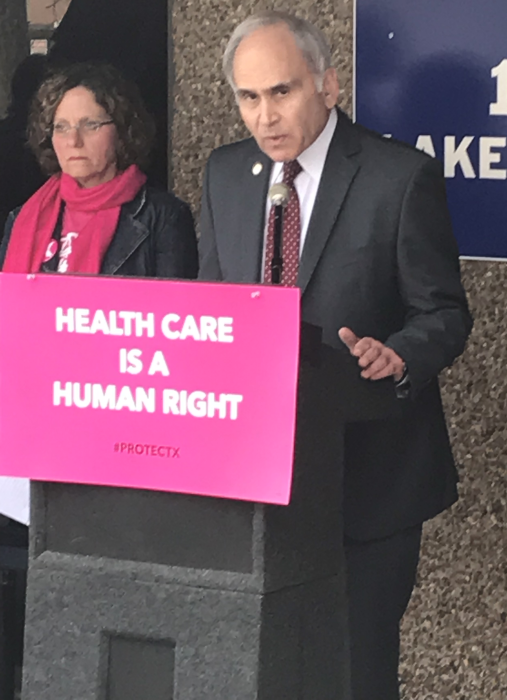 The U.S. Department of Health and Human Services last month announced the revised regulations for the program, which was created by Congress and signed into law by President Richard Nixon in 1970. The new rules, modeled after restrictions put in place by President Ronald Reagan in 1988 (that were reversed in 1993 by President Bill Clinton) provide funding for contraception but not for programs “where abortion is a method of family planning.”

Planned Parenthood Mid-Hudson Valley held a rally in Newburgh on Tuesday (April 16) to address the changing landscape for reproductive and sexual health care. The changes will prohibit the nonprofit, which says it serves 52 percent of the patients in New York who seek care at Title X-funded health centers, from receiving federal funds because it advises patients on abortion, said Ruth-Ellen Blodgett, the president and CEO of Planned Parenthood Mid-Hudson Valley.

Many of the women Planned Parenthood serves through the program come from low-income families without health insurance, she noted. In addition to birth control, Title X provides funding for wellness exams, cancer screenings and testing and treatment for sexually transmitted infections.

“Because of systemic inequities, many patients who rely on Title X for their health care needs are people of color, LGBTQ people, and people in rural areas, all of whom already face significant barriers to accessing health care,” the national office of Planned Parenthood said in a statement.

Jacobson said his position on Title X is simple. “I don’t think any politician should determine what a doctor says to his or her patient, or what a patient says to his or her doctor,” he said. The changes to the program have “nothing to do with health,” he said, but with “ideological practices” and an “agenda that they think will placate their political base.”

A number of other elected officials, including Newburgh Mayor Torrence Harvey and Orange County Legislator Kevindaryán Luján, as well as community and religious leaders, also spoke. 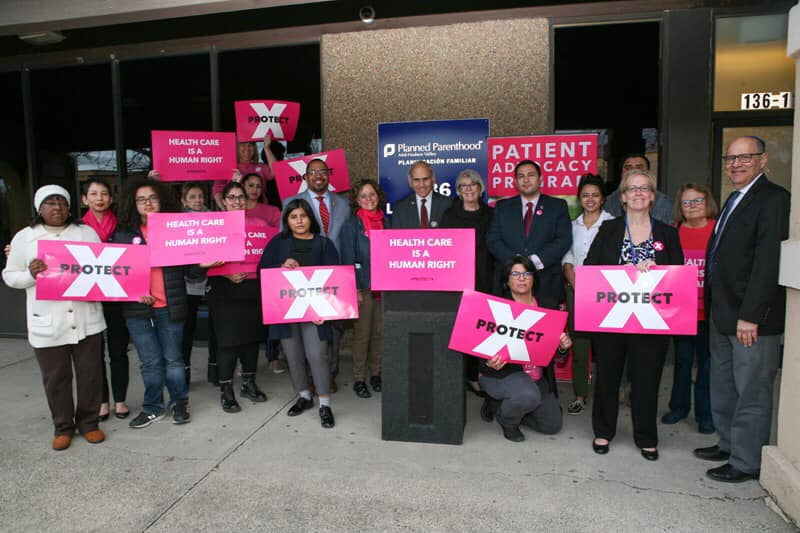 Planned Parenthood supporters at the rally, with Jacobson at the lecturn (PPMHV photo)

The administration’s changes have been applauded by pro-life organizations, which see the moves as the president taking another step toward fulfilling his campaign promise to defund Planned Parenthood. Christina Fadden, the chair of New York State Right to Life, said Thursday that taxpayers’ money shouldn’t be used to direct women toward abortions. “Supreme Court rulings have confirmed that it is appropriate for governments to stay out of the abortion business, and they are not required to fund it,” she said.

But Shannon Wong, the director of the Lower Hudson Valley chapter of the New York Civil Liberties Union, said on Tuesday that the new regulations are an assault on women’s rights.