When picturing life as an adult, I never imagined holding my dog’s head in my arms as she died in our home after 17 years. Gerdy’s body was failing, and I invited the angels to release her. I never told my children how it happened. Or that it might happen.

They were 4 and 6 years old at the time, and their grandmother was also in the process of dying. But we were prepared. We had been driving to Ohio to visit her in the hospital, and then in a hospice, where so many family members were taking turns being with her. We knew when she went, and where she went.

Animals in my family seemed to die and disappear. Our first dog, Bowie, got hit by a car outside our home in Syracuse while my brother and I were in the bathtub one summer evening. My dad called up the stairs to tell my mom the news.

Our next dog, Daisy, died the same way, only in our next neighborhood in Ohio. Maybe I was 10. My parents sat us down and told us that Daisy couldn’t walk anymore. We assumed she died. Our next dog, Holly, arrived on Christmas with a knock at the front door. Holly was a puppy from my aunt’s barn, and I don’t remember what happened to her after she lived with us.

Our next two dogs came in my teenage years. One was a terrier mix, and upon his arrival from the pound I kept him in my bedroom while I went to get something. He jumped out my window, happy to land in bushes down below, and proceeded to run around the yard, wagging his tale, chasing anything. 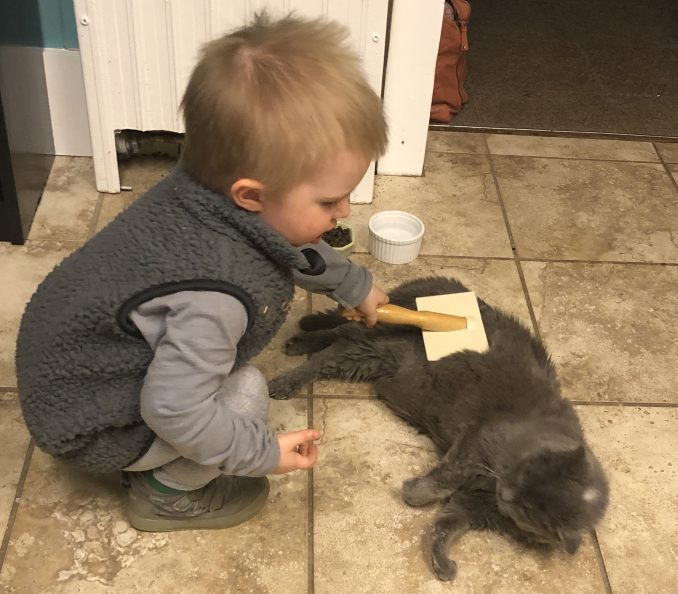 Little people who are low to the ground form strong bonds with fur babies. (Photo by K. Martin)

I named him Riley, for The Life of Riley. He lived for a long time, having many comebacks after fights with raccoons, until finally he died at home while my parents were away. He had already died a few times over the years, but this time it was final.

My cat Dinah came to me while I lived in New York City a few years after I rescued Gerdy from the pound as a puppy. Dinah was a barn kitty, and my sister felt compelled to give her to me. I ended up with a little gray Russian blue butterball that we called Dinah Bear. She and Gerdy became fast friends.

Dinah was here for the meeting of the man who became my husband, the arrivals of three children, and the passing of Gerdy. At 17 years, Dinah remained lounging on any piece of furniture she could hop or plop onto. She had miserable head congestion that sprayed everywhere, failing front legs and newly failing back legs. I kept waiting for The Day, but each day she awoke and ate voraciously.

One of our babysitters is a certified doula for the dying, and she was quite drawn to Dinah. “She’s looking at you a lot,” she observed. It became clear that Dinah was suffering yet peaceful. The vet thought that assisted dying would be timely, before her decline sped up and she lost control. Once again I invited in the angels, but my children are now 7 and 9, plus we have a little one who is 1.8. I let my toddler, who is blissfully unaware, do his weekly brushing of Dinah one last time (seen above). But how would I tell the other two?

I began viewing Dinah’s condition as self-imposed hospice. I told the kids of Dinah’s longstanding symptoms, and that it was beginning to be too hard for her to live. The kids gave her hugs. The next day after soccer practice, the angels came, and I told the kids that Dinah had died. I didn’t know what would happen next. I kind of let them lead.

The kids were surprised and wanted to see her. I had decided to bury her in the backyard and told them this, which triggered them to search everywhere for her until I relented. I allowed them to view her little box in her resting place before the burial. They opened the box to see her wrapped in her favorite fleece blanket, then wanted to carry the box outside to be buried.

That night as a family, we buried her. My kids were little pet pallbearers. My tears had been shed for the day, so I was pretty well composed as they tossed dirt onto the box. My son mentioned that I wasn’t crying. If he wanted to see tears, I thought, he can, so I let them come again.

This week, while lounging outside in the spring sunshine with our other cat, Oliver (who is about 14), he was giving us his usual “I’m hungry” signs. Oliver was always respectful of being second in line at the food bowl. My son declared: “I guess it’s good that Dinah is gone because now Oliver can have all of the food.” Processing is a process.