Rena Corey wants to see red — the bright red of a traffic signal she says is desperately needed in Cold Spring so seniors can safely cross Route 9D for postal, medical and other services offered at the Butterfield redevelopment project.

Corey, who is one of more than 60 residents of the Chestnut Ridge apartment complex across from the project, addressed the Cold Spring Village Board at its April 23 meeting, pointing out that while a light has been discussed for years, “now we have a medical center, a [county] Friendship Center and a post office” at Butterfield. “I don’t dare cross 9D to get to any of those buildings; it is impossible to cross that street.” 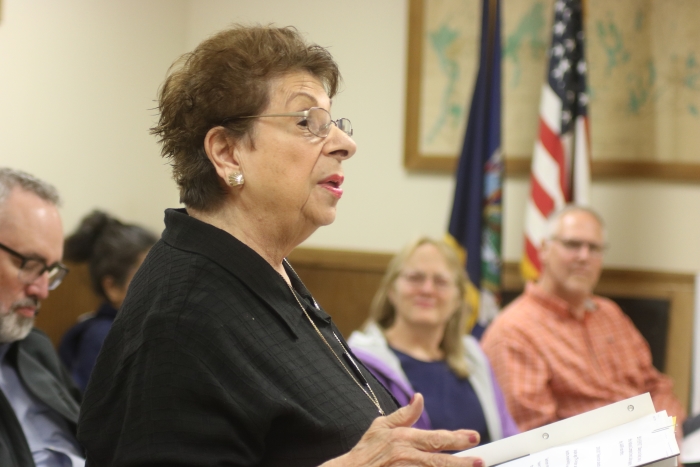 Rena Corey at the April 23 Village Board meeting (Photo by M. Turton)

North and southbound traffic combined with vehicles entering and leaving Butterfield create “a menace” according to Corey. “It’s a dangerous situation.”

The village currently has only one signal, at the intersection of Route 9D and Main Street, about three blocks north of Chestnut Ridge.

Corey said she spoke with officials from the state Department of Transportation, which has jurisdiction over Route 9D, and was told that a traffic study would have to be conducted before a light could be installed, and for that to happen, the Village Board would need to pass a resolution giving its support.

That led to a lengthy exchange between Corey and Mayor Dave Merandy.

The mayor placed some of the responsibility for traffic issues on the Butterfield developer and the seniors themselves.

“When our Planning Board was discussing all this, it was pressured by the seniors to just get it done,” he said, adding that the state completed a traffic study during the planning process for the Butterfield project.

The Department of Transportation, he asserted, “knew exactly what was going to happen there — the Friendship Center, doctor’s offices, all those apartment buildings,” Merandy said. A light was not recommended at the time and Butterfield plans haven’t changed, he said.

“You’re mixing apples and oranges,” Corey responded. “The necessity for a senior center has really nothing to do with the traffic light.” 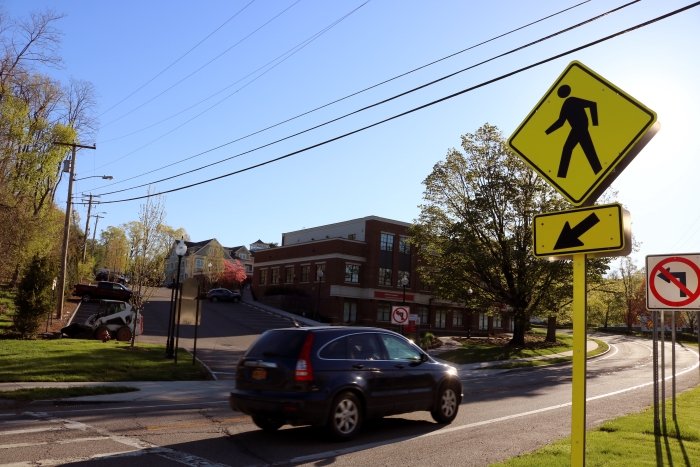 A crosswalk on Route 9 connects Chestnut Ridge and the Butterfield complex (at left). (Photo by M. Turton)

When Merandy persisted in his criticism of seniors’ lobbying, commenting they had not given the Planning Board and village “enough breathing room” in dealing with Butterfield, Corey shot back, sarcastically: “They [seniors] are a dangerous group, I understand.”

“I agree, they are a very powerful group,” Merandy said. “Ask any politician.”

Corey was quick to react. “I didn’t know I’m that powerful,” she said. “But if I am, get that traffic light resolution done tonight!”

Deputy Mayor Marie Early suggested that Chestnut Ridge seniors use the bus service provided by Putnam County to get to facilities at Butterfield.

“That’s wonderful,” Corey said, “But it’s a right to take a walk and cross the street. What could be healthier for older people than to be able to take a walk?”

Larry Burke, the officer-in-charge for the Cold Spring Police Department, said one idea that came out of a meeting he had with Department of Transportation officials was a flashing caution light with a button that could change the light to red.

He added the cost for any type of light would be at least $100,000. “Ultimately it’s not going to be up to us,” he said. “DOT is going to go by its own plans.” Merandy said that he would follow up with the state.

Trustee Lynn Miller pointed out that a federal appeals court in Cincinnati recently ruled that marking tires to determine parking violations is unconstitutional.

The court ruled that by marking tires with chalk, a municipality “commences its search on vehicles that are parked legally without probable cause or even so much as ‘individualized suspicion of wrongdoing.’ ” It added that the “intentional physical contact” by a parking officer with a vehicle constitutes trespass.

Although the decision only applies in the 6th District, which doesn’t include New York, Miller said she can foresee tickets being challenged in Cold Spring traffic court.

“We’ll cross that bridge when we come to it,” Officer-in-Charge Burke said.

Trustees approved again hiring Nico DellaValle as parking enforcement officer over the summer for $15 an hour.

♦ The board adopted the 2019-20 village budget, which includes spending of $2.5 million, of which $1.66 million will be raised through taxes, the maximum allowed under a state-imposed cap. The budgets for water and sewer, which are funded through user fees, were also approved.

♦ The board approved an extensive application form for special events at Dockside Park.

14 thoughts on “Does Cold Spring Need Another Traffic Light?”