Five times each year, the members of Jenna Isabella and Ashley Linda’s journalism class at Haldane High School publish a school newspaper, The Blue Print. With support from the Haldane School Foundation, reporters and editors from The Current are working with the students to craft their stories and share their reporting with the community. Selections from the latest issue appear below.

By the time the second bell rang for the start of the lunch period on Feb. 4, Haldane High School Room 126 was packed with students, teachers, and members of the local press, all gathered for U.S. Rep. Sean Patrick Maloney’s first student town hall at Haldane. Rep. Maloney briefly talked about the day-to-day functions of Congress before opening up the floor for student questions.

Students asked questions of a wide variety, from the recent government shutdown to the importance of youth involvement in politics today. He talked about how the younger generation is taking the reins on political activism and change in our country. 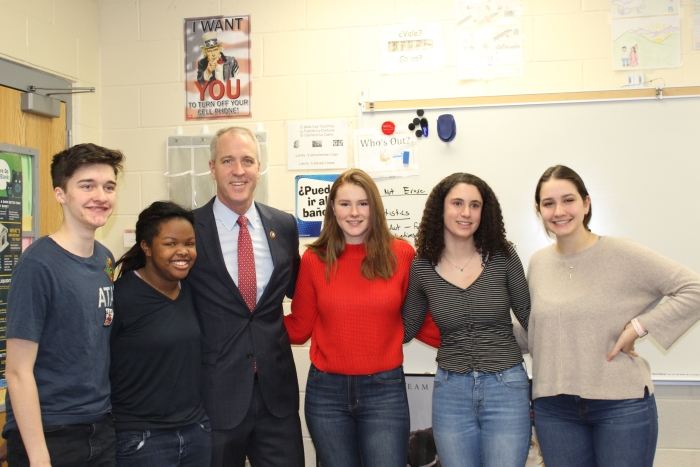 The first question pertained to the government shutdown, and Rep. Maloney explained how the shutdown occurred, and what he was doing as a member of Congress to limit the length of the shutdown.

The congressman also answered a question about President Donald Trump’s tweets and discussed how social media, particularly Twitter, has become a medium for political announcements rather than the press release of the past. He said: “Tweeting is obviously a new thing in presidential history, but it’s not that weird when you think about it; the president’s tweets are weird.” The comment stirring up some laughter in the room.

He proceeded to answer questions about current legislation he is working on, reform of Congress, campaign finance and the Mueller investigation, which was important considering that Rep. Maloney was just placed on the House Permanent Select Committee on Intelligence. Overall, Congressman Maloney talked most about student civic involvement, emphasizing its importance in improving the state of our nation.

The event certainly inspired great excitement in many students and teachers alike. Government and politics teacher Ms. Seidman, who organized the forum, said: “I was really excited to have him as a guest speaker, and I think he did a really good job running it as a town hall, and I think it resonated with a lot of students.” 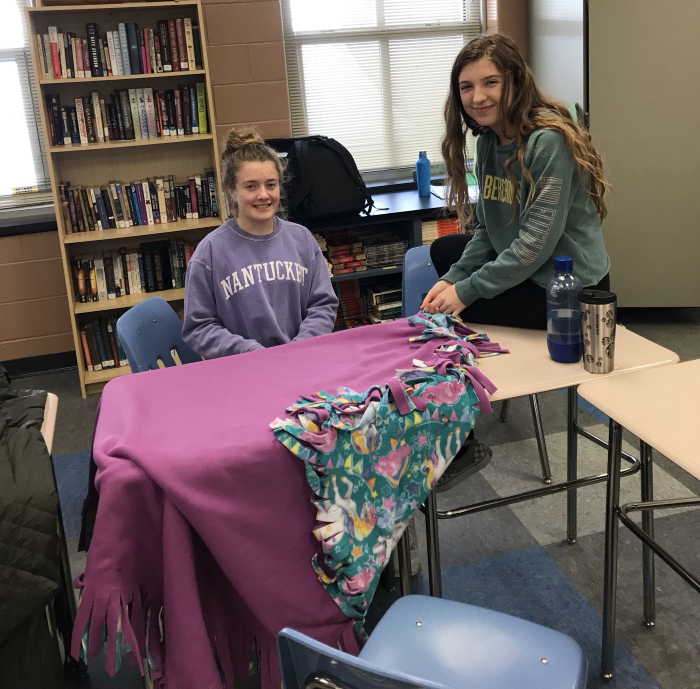 This year’s LEO Club made 12 blankets.

The LEO Club has been engaging in this charitable act for the past three years. The blankets have gone to children who are fatally ill or traumatized by personal experiences.

“The LEO Club spent their lunch period giving back,” says Club President Olivia Olsen, who has been a member since the club started partnering with Project Linus. “It was a great way for the club to get together and get involved in an important issue.” This year’s LEO Club made 12 blankets that will be put into the hands of deserving children.

Poetry Out Loud
By Natalie Sandick

The annual Poetry Out Loud competition took place on Jan. 7 in the Haldane Middle/High School library. A total of 11 high school students participated, each reading two poems of their choice in front of a panel of three judges. Students were judged on accuracy, physical presence, voice and articulation, dramatic appropriateness, evidence of understanding and overall performance.

Juniors Noah Bingham and Andrew Nachamkin were victorious and went on to participate in the regional competition at SUNY New Paltz on Feb. 7. 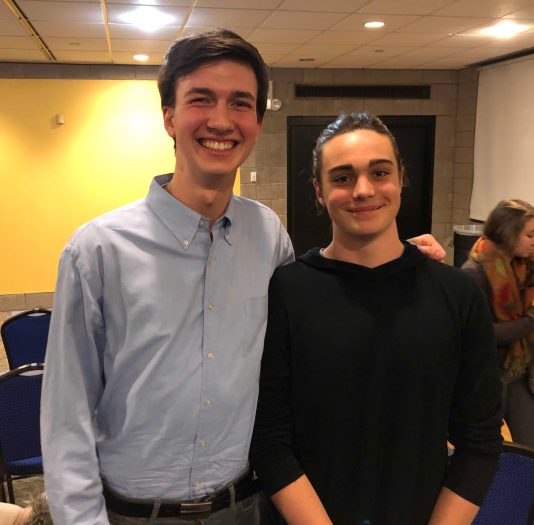 To prepare for this contest, Bingham says he tried to become familiar with the words and wanted to add his own personal touch when reciting them. He also felt it was important to watch for speech patterns and mesmerize the rhyme and rhythm.

This was Nachamkin’s first year participating in the competition: “I never [thought about doing] Poetry Out Loud until Dr. Richter approached me, and I ended up winning the Haldane contest. I really enjoyed this experience and learned a lot about public speaking.”

This upcoming spring there will be a girl’s lacrosse clinic for high school students at Haldane, along with a girls’ modified lacrosse team for seventh- and eighth-graders.

Chuck Twoguns will lead the clinic but there is not yet a coach for the modified team. Talk about a girls’ lacrosse team has been going on for a few years now, and after several girls in the high school showed interest, Twoguns was happy to get a team started.

The clinic is being held in hopes to attract a wider range of players, which will allow for an official varsity and/or junior varsity team in the future, along with help from the modified team.

In the clinic Twoguns will teach the fundamentals of lacrosse. As of now the clinic will allow for the girls to compete in scrimmages with other teams to give a feel for what it’s like to play. The “season” will culminate at the Annual Roscoe Tournament in June, where girls will be playing games with official teams and referees.

When asked about the program Twoguns stated, “my intention is to teach any girl interested in this great sport the basic fundamentals and to share my passion of it in hopes they will develop their own love for the game. We make the game fun to learn and hope the girls develop their own passion for the game that will enable them to encourage themselves.”

On March 1, the Spanish and French students of Haldane High School embarked on their annual immersion trip.

This year the trip was to Sharpe Reservation in Fishkill. The day began with a breakfast of pancakes, bacon, fruit and cereal. Students were also introduced with folders that had different information like the itinerary for the day, bracelets, and sheets to go along with the presentations.

The first activity was a “Cultural Dance” by Fred Astaire Dance Studio, which taught the students how to waltz. They were taught each step in small parts and then combined it all together at the end with music. 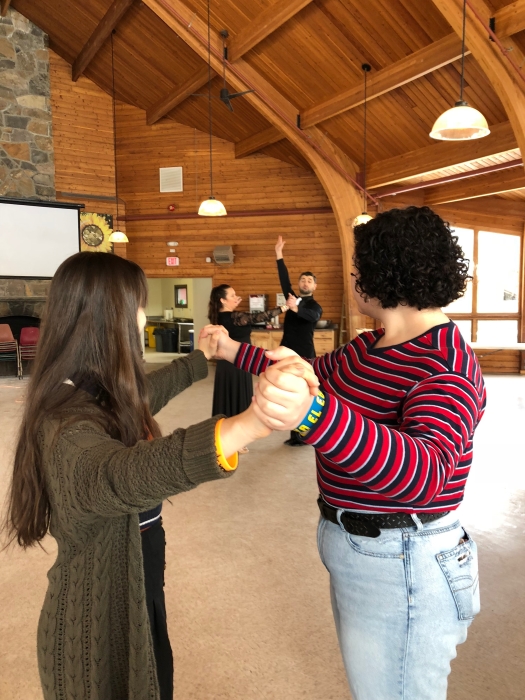 After the dance, the Spanish and French students split into two groups and attended language-specific presentations. For Spanish, the students learned about Costa Rican culture, grammar, and sayings with teacher John Schepisi. The French students learned about the culture and history of Haiti with Jerrice Baptiste. The students joined together again for a cultural lunch of plantains, rice, French onion soup, cheesy potatoes and pulled pork fajitas.

Lunch was followed by performances by the students of a variety of songs, poems and immersive dances. Once again, the students divided into two groups. The Spanish students listened to a presentation about Spain from Mercedes Burke. This presentation highlighted the different sites and customs of Spain.

During this, French students went on a walk through the woods for a “Maple Syrup Program” by Sharpe where they learned about this important component of Canada’s economy. Later on Pentagrama arrived with a full band and showed students the Cumbia. Students were invited to learn about the history of this dance and take part in the musical performance.

Dinner was provided by Sharpe before the students returned home. The students of this year’s Immersion Program enjoyed their experience at Sharpe Reservation and look forward to next year’s program.

During the week of Feb. 11, students at Haldane High School participated in Random Acts of Kindness week. Each day of the week was assigned a random act of kindness to encourage high school students to do something helpful and kind to someone.

Each student was given a “tic-tac-toe” styled grid in one of their classes, each square had a good deed such as “give someone a high-five” or “hold the door for someone.” Students filled out hearts with nice messages for their teachers and staff members.

Ninth-grader Shea DeCaro and 10th-grader Arden Conybear were awarded a prize for being the two students who completed and submitted their tic-tac-toe square of good deeds.

On Feb. 17 through 19, 48 Haldane students attended this year’s overnight ski trip to Vermont, starting at 6 a.m. Sunday morning with a three-hour coach bus ride to Bromley and ending late Tuesday night after a long day of skiing at Stowe. This year, like almost every year, they stayed at the Round Hearth at Stowe which is only a 15-minute drive to Stowe Resort.

The first day of skiing was at Bromley, “Vermont’s Sun Mountain.” The bus arrived at around 9 a.m. to the mountain. After the long bus ride, the ski trip was finally able to begin. In the morning there were a few clouds, but it cleared up for the rest of the day. The temperature was in the 20s all day, but you could never tell with all the sun. For many, this was their first time to Bromley because last year the ski trip went to Okemo on the first day.

The second day of skiing was at Stowe Mountain Resort. Stowe is located on Vermont’s highest mountain, Mount Mansfield, at 4,393 feet. It was a little colder this day, reaching a high of about 20 degrees. During this day, some chose to take the risk of adventuring through the glades to go to a cave.

The third, and final, day of skiing was at Stowe again. This was also the coldest day with the temperature remaining in the single digits to negatives almost all day and 12 mph winds. The cold was made bearable while many chose to take advantage of the upscale lodge only a gondola ride away at Spruce Peak.

The students had access to skiing at this smaller ski area that was reachable by a gondola that went over the parking lot. There was also a small ski village with shops, eating, and ice skating that could be enjoyed if students were tired from skiing or snowboarding all day.

The first two days ended with fun at the Round Hearth. For people who’ve been on the ski trip multiple times, the Round Hearth is a very familiar place filled with fond memories. Here students ate dinner and slept. There were also tons of activities to keep them occupied, including air hockey, pool, board games, a movie room, and even a hot tub. Freya Wood-Gallagher, a member of the ski club for many years, said “once again the Round Hearth gave us a warm and welcoming experience.”

On the last day, the bus departed Stowe at 4 p.m. with a six-hour trip ahead. Halfway during the ride home, the bus stopped for food where the students could pick from Taco Bell, KFC or McDonald’s. After eating for about 30 minutes, the ride continued home, and the bus returned to Haldane around 10 p.m. This was the last ski trip for many of the seniors, some of who’ve attended since eighth grade.