The Beacon Farmers’ Market will open on Sunday, May 5, at the Veterans Place site it has occupied since 2017, but only temporarily.

On June 2, the market — unable to convince the Beacon City Council to renew its one-year lease at the site — will relocate to the Department of Motor Vehicles parking lot at 223 Main St., about six blocks away.

The move will be the market’s third in four years, and that upheaval may confuse casual customers, market organizers argued during the City Council’s April 29 meeting.

The Beacon Farmers’ Market will move to a new location this year. (Photo provided)

The market was originally located at Veterans Place before moving to the Beacon waterfront in 2002. After becoming a project of the nonprofit Common Ground Farm, the market in 2017 returned to the Veterans Place block near Main Street and the post office. That allowed more people access, organizers said, and vendor sales increased 35 percent, with almost three times the number of low-income residents receiving discounted produce.

Yet even three years after moving, the market is still “getting people looking for us at the waterfront,” said Paloma Wake, who manages the market for Common Ground. Another move would confuse the customers who have now grown accustomed to the Veterans Place location, she said.

Some nearby business owners, notably Phil Ciganer of the Towne Crier Cafe, say the market, which is open from 10 a.m. to 3 p.m. on Sundays from May 5 to Nov. 24, disrupts their operations by creating excessive noise, blocking parking spaces and selling products other than farm-grown food.

“I’ve shown up at work at 10 in the morning and I can’t find a parking spot,” said Ciganer, who voiced similar concerns a year ago when the market renewed its lease with the city. He noted that bands playing the Towne Crier have had trouble loading equipment into the venue when its side entrance has been blocked. 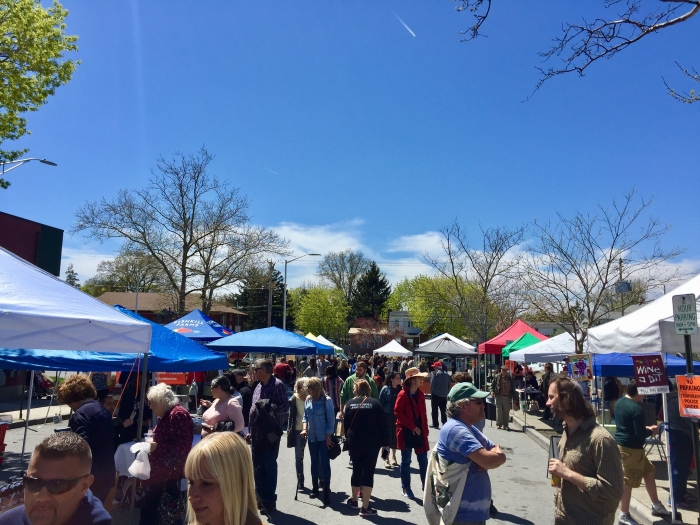 Some nearby merchants complained that the market’s current location causes problems. (Photo provided)

In the winter, the market moves indoors to the Memorial Hall building at 413 Main St.

Market organizers sparred briefly with the council during the April 29 meeting, calling the move to the Dutchess County lot “abrupt and uncomfortable” for vendors and customers. But Mayor Randy Casale said Common Ground staff had dragged their feet after being notified that the change was imminent.

“The market knew it had a lease for one year,” he said. “They knew the lease had to be renewed. It was your due diligence to come and get your lease done. It’s not on us.”

The City Council will vote on Monday, May 6, to confirm the farmers’ market’s move for the upcoming season.

The council will hold a public hearing on Monday to discuss a request from Verizon to install a 52-foot wooden utility pole with a panel antenna on private property at 110 Howland Ave.

Verizon submitted an application last year to lease about 100 square feet on the property to erect the wireless antenna, but the company cannot proceed without a special-use permit from the City Council.

The council has received highly disparate feedback on the proposal, including from consultants who’ve said the tower would safely address a gap in wireless coverage, and from residents who claim it will emit dangerous radio frequencies. The Beacon Planning Board has recommended the company construct a 6-foot fence around the facility and plant evergreens to hide the tower.

The Dutchess County Planning Board, in its review, suggested moving the tower to the east, closer to the Mount Beacon tree line.

A second public hearing will be held to discuss a recrafted sign ordinance that dates to last year, when city attorneys suggested Beacon’s regulations were unconstitutional.

Since then, the council has debated numerous revisions, at times dissecting the drafts line by line. Council Member Lee Kyriacou has suggested adopting regulations that match the city’s zoning districts — historic, Main Street, residential, and “everything else.”

The most recent draft of the law was expected to be posted to cityofbeacon.org today (May 3).