The Beacon Farmers’ Market will remain at its Veterans Place location at least for the 2019 season after the City Council pivoted on Monday, May 6, and voted not to force the vendors to relocate.

That outcome seemed like a long shot a week earlier, when the council, during a workshop meeting, agreed that the market should be moved to the Department of Motor Vehicles parking lot at 223 Main St., about six blocks west.

The market, which will operate outdoors on Sundays through Nov. 24, when it moves inside, has had a topsy-turvy tenure since relocating in 2017 from the waterfront to the busy Veterans Place block. While sales and the distribution of discounted produce to low-income households increased, Phil Ciganer of the neighboring Towne Crier Cafe petitioned the City Council this year and in 2018 to move the market, saying it disrupted his customers by blocking parking spaces and creating too much noise. 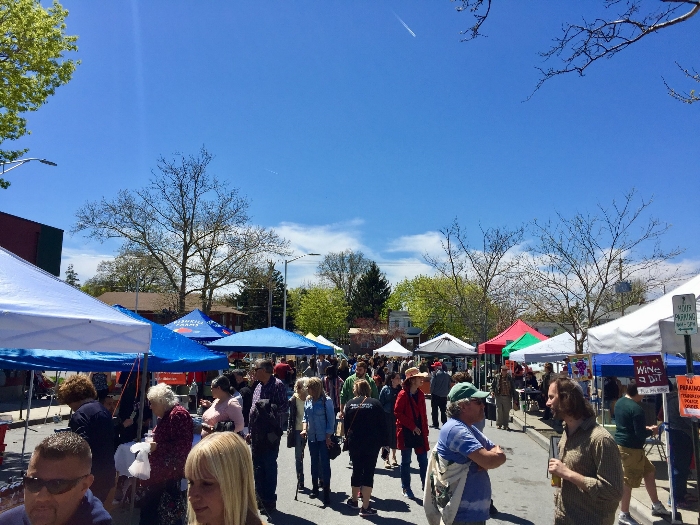 The Beacon Farmers’ Market will stay in its current location for at least another year. (Photo provided)

Last year the two sides reached a compromise, with market organizers pledging to turn down the volume on live performers while respecting the Crier’s need for parking. But this year, market staff, following some management turnover, was late in approaching the City Council to arrange its lease for the 2019 season. That, combined with Ciganer’s testimony, seemed to lead the council during last week’s workshop to side with moving the market to the DMV lot.

This week, however, numerous residents asked the council to reconsider before voting to confirm the move.

“I love the atmosphere of [the market], the feeling of Beacon coming together as a community in a public place,” said Jessica Jelliffe. “It’s almost like breaking bread together every week. It’s a wonderful feeling.”

Ultimately the council voted 5-1 to adopt an agreement that is nearly identical to the one approved for the 2018 season. Mayor Randy Casale voted “no” and Council Member Lee Kyriacou was not at the meeting.

Neither was Ciganer, who said on Wednesday that he thought the market’s move to the DMV lot was a done deal.

“I know it’s a sensitive issue,” he said, “and I don’t want to give the impression that I’m trying to close them down. But we make our livings on Saturdays and Sundays, and things all started off on the wrong foot” at the Veterans Place location.

The market must return to the council later this year to discuss plans for 2020. Paloma Wake, its manager, said this week that the nonprofit Common Ground Farm, which has sponsored the market since 2016, would be willing to move the market to the DMV if given time to establish relationships with the business owners along that stretch of Main.

“We do want to have a permanent home,” Wake said, and if the DMV lot works “we’ll happily move there. We want to be where the community wants us to be.”

One thought on “Beacon Pivots on Farmers’ Market”