Cold Spring’s newly adopted fee schedule to rent Dockside Park faced its first test at the May 7 meeting of the Village Board.

Trustees voted down a request from Brian Grahn of Hudson River Expeditions to reduce the $2,500 charge for a two-night campout during the Hudson River Paddle in early July, when as many as 40 kayakers and canoeists would stop during a five-day trip from Poughkeepsie to New York City.

Hudson River Expeditions, which is based in Cold Spring, handles logistics for the trip on behalf of the Hudson River Valley Greenway, a state agency that promotes preservation and recreational use of resources along the river. 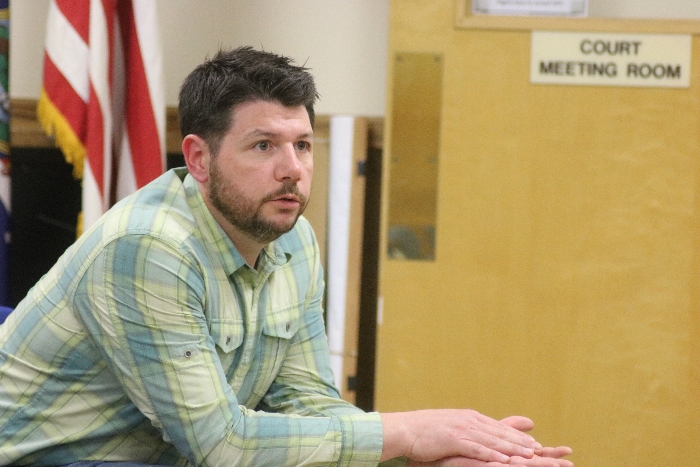 Brian Grahn of Hudson River Expeditions asked the Village Board to lower the rental fee for an event at Dockside Park. (Photo by M. Turton)

Last year, before management of Dockside passed from the state (which owns the 6-acre parcel) to the village, The Hudson River Paddle camped there at no charge. The village, which as part of its agreement with the state can charge fees, adopted a schedule at its April 23 meeting (see below).

At Tuesday’s meeting, after Grahn told the board the event could not afford $2,500, a motion to reduce the cost to $1,000 was defeated. The board then voted 4-1 to charge the full fee, with Trustee Steve Voloto casting the “no” vote.

“This is a for-profit event,” Mayor Dave Merandy said just before the vote, adding that the fee is part of the “cost of doing business.”

The Dockside Park User Guide details permitted and prohibited activities as well as how to rent the site for weddings, graduations and other private events. It includes application forms and will be available at coldspringny.gov and at Village Hall at 85 Main St. Some highlights from the policy appear below.

Events must be approved in advance by the Village Board. The area used will be roped off, with the park remaining open to the public. Alcoholic beverages are permitted only with a state permit.

Carry-in kayaks, rowboats, canoes and similar craft are permitted but motorized boats cannot be launched. A permit is required for a trailer drop.

Earlier in the meeting the mayor pointed out that the village receives no financial assistance for maintaining Dockside and that any improvements made there would have to be funded by user fees.

Grahn said he had no comment on the board’s decision. Participants in The Hudson River Paddle pay $1,000 each to participate in the event, which is billed as “all inclusive,” including food served from a mobile kitchen, campsites, equipment, transportation and guides.