On May 1, Garrison resident Tim Donovan briefed the board on the concept of a community garden on a 10.8-acre parcel at the intersection of Route 9D and Route 403, near the Desmond-Fish Library. 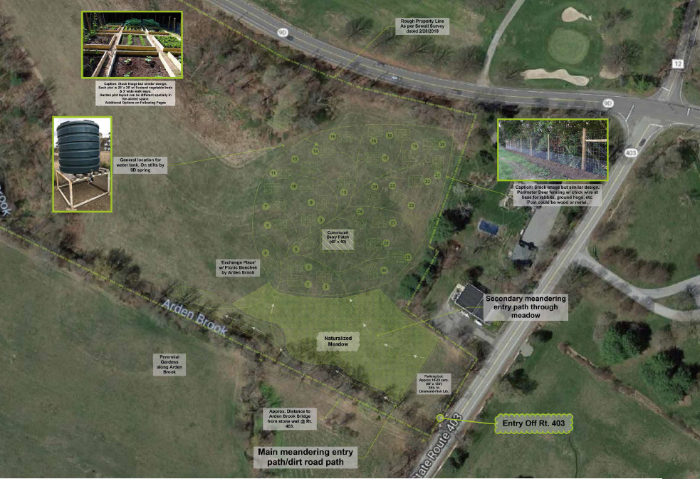 A map by RJR Horticulturalist LLC, based in Philipstown, shows the community garden concept outlined by Tim Donovan to the Town Board. (Click to enlarge)

The town government acquired the land as a gift in 2017 from the Scenic Hudson Land Trust and the Open Space Institute.

As outlined by Donovan, the New Leaf garden project would include raised beds, at least initially, as protection from invasive-species plants; communal berry patches; a pergola for shade; 30 garden plots approximately 36 feet by 24 feet, each subdivided into nine beds; an area for compost; perennials along a meandering path by Arden Brook; a meadow; a small parking lot; and other features. He estimated that the project would cover about 3.5 acres, including a 1-acre meadow as a buffer.

“We’re looking to try to help build an intergenerational site that can be [devoted] to a really good purpose and help community agriculture here,” Donovan said.

Board and audience members welcomed the idea, although some had questions.

For one thing, Recreation Commission members Bill Mazzuca and Claudio Marzollo pointed out, the property has already been viewed as a potential site for athletic fields.

“There are a lot of other things already [envisioned] on that site,” Marzollo said. The commission supported the idea, he said. “The question is, where does it go? Where is the best place to put it?”

The Recreation Commission and Donovan agreed to confer.