The Philipstown Town Board voted 5-0 last week to seek an injunction to shut down a rock-crushing business that has lost multiple court decisions over zoning violations.

The vote came during the board’s monthly meeting on May 2, a few days after the town issued a new stop-work order against the firm, RNV Green Processing & Supply Corp., owned by Ricky and Mark Ventura at 1 Lane Gate Road, near the intersection with Route 9.

Supervisor Richard Shea said on May 2 that the Venturas had “completely ignored” the stop-work order and nearly six years of town warnings and judicial decisions. “We have won every court case. This is illegal [debris] processing,” Shea said, terming the situation “just ridiculous. He [Ricky Ventura] shows no sign of stopping. He’s completely flouting the law at this point. So now we have to go to heavy-handed action, getting a temporary restraining order, an injunction, which means we send the police there.” 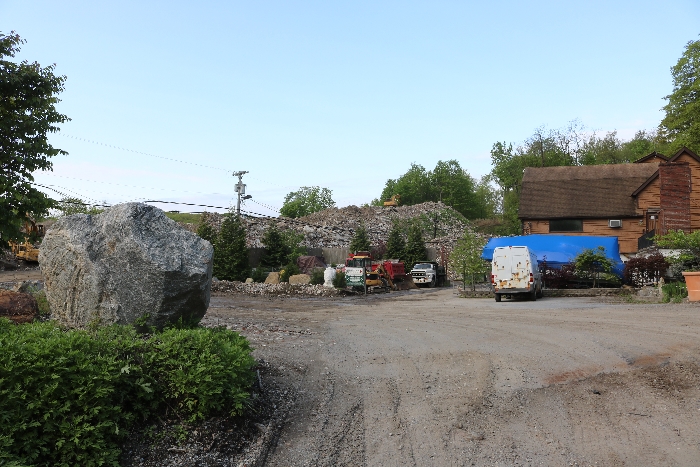 Philipstown has asked for an injunction against RNV Green on Lane Gate Road near Route 9. (Photo by Michael Turton)

Shea added at a workshop session on Wednesday (May 8) that the town awaits a judge’s response to its application for the injunction.

Standing outside his business on Thursday (May 9), Ricky Ventura claimed that the supervisor has a “vendetta” against him and that the town is trying to push the firm out, which “isn’t fair.”

The Philipstown zoning case began in July 2013, when Kevin Donohue, then the town’s building inspector and code enforcement officer, visited the 9.6-acre property after receiving complaints. He determined that the Venturas were processing demolition debris and dirt, crushing stone into gravel, and stockpiling the debris and gravel in violation of a 1983 site plan and the zoning code. Donohue ordered the men to cease operations by the end of that month and restore the land to its condition the operations began.

Over the years, the Venturas have argued that their operations are legal because the 1983 site plan allows for a “contractor’s yard.”

The town brought charges in Philipstown Justice Court on five identical counts, one each for five dates between Oct. 7 and Nov. 4, 2013, when inspections indicated the Venturas were continuing operations despite Donohue’s cease-and-desist order.

During a trial in 2015, the Venturas’ lawyer, Anthony Luisi, maintained that the dispute was about “more than just an alleged violation of the zoning code” because it involved the Venturas’ “constitutionally protected rights to continue to use their property the way they have for over 30 years.”

Robert Cinque, the town’s special prosecutor, asserted that the site plan “does not provide for rock-crushing or other activities” and that the zoning code doesn’t permit them, either. Steiner found the Venturas guilty and fined them $1,750.

The Venturas next turned to the appellate court system, only to lose again. A three-judge appellate panel in Albany ruled on March 21 of this year that the owners had failed to prove that rock crushing and the other activities were allowed by their site plan or the zoning laws in effect in 1983. By comparison, the appellate court stated, Philipstown authorities “established beyond a reasonable doubt that the non-conforming use was illegal in 1983 and thereafter.”

The appellate judges did drop one of the five counts, reasoning that violations recorded by Philipstown on Oct. 15 and Oct. 21 in 2013 were too close together to constitute separate violations; they therefore reduced the fine by $350. (The Venturas asked the court for a stay on the fine and conviction and for permission to appeal again but on April 18 both requests were denied.)

The Venturas may also soon face foreclosure proceedings because they have not paid town, county or school taxes on the property since 2015, according to the Putnam County finance department, and owe more than $160,000. The 2018 tax rolls say the property, containing residential and commercial buildings, has a market value of $1.38 million.

At Wednesday’s workshop, Councilor John Van Tassel observed that “there was still dirt flying around” the Ventura site on Monday (May 6).

“I’m sure there will be dirt flying around until we show up with the police and the injunction,” Shea replied. “But it is coming to an end. There’s no doubt about it.”