Harrold Weinberger, a Beacon native whose official titles at Metro-Goldwyn Mayer Studios were assistant director and production manager, filled in as a bit player at MGM whenever he was needed. For instance, he can be seen below as a prison guard (wearing a fake mustache) standing between Clark Cable and Joan Crawford in the 1940 film, Strange Cargo. 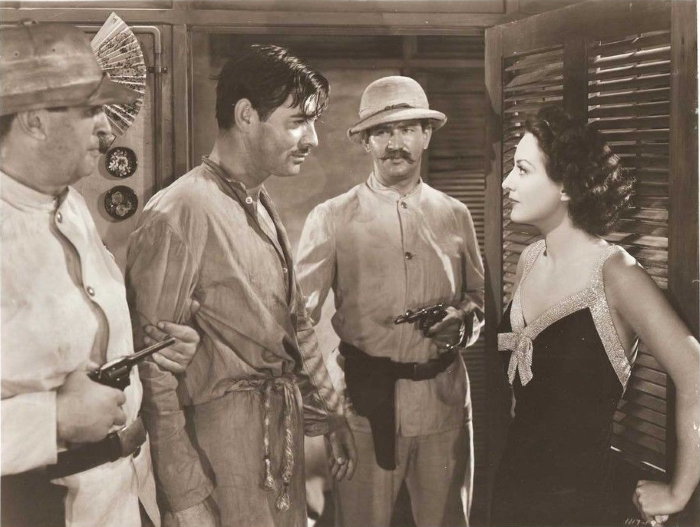 Harrold made headlines in a local-boy-makes-good story in the March 21, 1940, issue of the Beacon News as the assistant director of the newly released Northwest Passage with Spencer Tracy. One of his duties on the film, which was shot in Idaho, was to round up and look after more than 400 Native American extras. After leaving MGM, Weinberger became an assistant director in television, working on such popular programs as Sky King, Gomer Pyle, USMC and That Girl.

During World War II, at the height of his film career, he joined the Marines as a combat photographer and was wounded by shrapnel at the Battle of Iwo Jima. He also served in the Korean War before retiring from the Marines as a major. He died in 1997 at age 97.

The Beacon Theatre on Main Street is again showing movies, although on a smaller scale than its predecessor, which operated at the location from 1934 to 1968.

Back then it was more than just a place to show movies. It was also a venue for vaudeville acts, especially in the 1930s and 1940s, as well as headquarters for a radio program, a theater guild, a dining and dance hall on the second floor called the Wonder Bar, and stage acts.

Even its mainstay — first-run movies — was often flavored with added attractions such as Bank Night on Wednesdays (first prize: $125) or Dish Night, when free flatware was passed out to patrons.

An advertisement for Zelda the Mystic at the Beacon Theatre (BHS)

Perhaps the most noteworthy stage performance at the old Beacon was when WABC’s popular Vox Pop radio program was broadcast live coast-to-coast from its stage on March 24, 1948. Vox Pop (an abbreviation of “voice of the people”) was a mixture of fun interviews, quiz questions and human interest stories of ordinary folks recorded on location from places (on this night, Beacon) across the country.

The stars were Parks Johnson and Warren Hull, who interviewed Beacon resident Jane Brett, Beacon High Principal William Pearse and, for a touch of local color, mountaineer George “Kim” Barrett. Each member of the packed audience paid $2.50 [about $27 today] to get in.

The zaniest stage show to appear at the Beacon may have been Zelda the Mystic, who was there during the week of Feb. 10, 1936. As a warmup, and to show off her supernatural powers, Zelda drove an automobile up and down Main Street while blindfolded. She topped that at 1 p.m. by hypnotizing a young woman to sleep in the display window of Schoonmaker’s department store. At showtime, the woman was carried to the lobby of the theater and awakened onstage.

Zelda divined the answers to personal questions from the audience, such as “Will my son have to go to war if we have one?” Zelda responded: “We will soon be dragged into a conflict worse than the last one. Your son will go but will be fortunate enough to return to you.”

Bayview Avenue has a short run of houses that lie atop a hill above the road leading to the train station. The street is aptly named, for its views looking west toward the Hudson River are the equal of any in Beacon.

Oddly enough, with all the great surrounding scenery the waterfront has to offer, a noted artist’s creative attention once was drawn to Bayview Avenue and the three houses peering over its crest.

The artist was Adolf Dehn, one of the leading lithographers of his day who, in the 1930s, turned his talents to painting watercolors of the American landscape. He had come to Beacon from his home in Cornwall to paint scenes of the Hudson, the railroad and the Highlands when the houses on Bayview caught his eye. 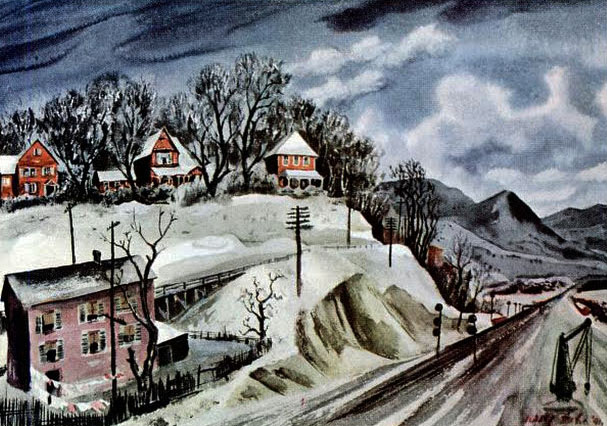 The resulting work, “The Three Red Houses,” along with other of his landscapes, appeared in the Aug. 11, 1941, issue of Life. Dehn recalled that he had been working on a picture he called “Tracks Along the Hudson,” but it was so cold he went down to the ferry and rode back and forth to get warm. From Newburgh he saw the three houses. “I got terribly excited and had to do something quick,” he recalled. “I stood in the mud and sketched, then finished the job at home.”

The three red houses — Nos. 15, 17 and 19 Bayview Avenue — are no longer red but clearly visible as you walk along the road to Dia:Beacon. Look up and see what Adolf Dehn once saw and was enthralled by.

On Feb. 19, 1861, Walt Whitman, standing amid the crowds at the 30th Street Station of the Hudson River Railroad in New York City, described the appearance of president-elect Abraham Lincoln as he alighted from his inaugural train:

“From the top of the omnibus I had a capital view of Mr. Lincoln: his looks and gait; his perfect composure and coolness; his unusual and uncouth height; his dress of complete black; stovepipe hat pushed back on his head; dark brown complexion; seamed and wrinkled yet canny-looking long neck; and his hands held behind, as he stood observing the people.” 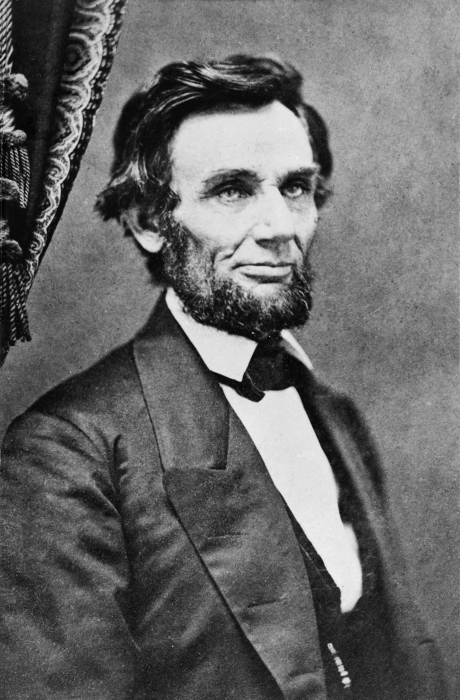 About two hours earlier, and 60 miles north of 30th Street, the crowds at the Fishkill Landing (now Beacon) depot would have witnessed a similar scene when Lincoln’s train stopped there. The occasion was the Albany-to-New York leg of a 12-day, whistle-stop journey from Illinois to his inauguration in Washington, D.C.

From Albany, the train made stops that day at Hudson, Rhinebeck, Poughkeepsie, Fishkill Landing and Peekskill. The Lincoln Special arrived at Fishkill Landing at about 1:30 p.m. The locomotive was decorated with red, white and blue and lithograph portraits of Lincoln on each side of the cab. Lincoln emerged from the train and addressed the crowd.

“I appear before you not to make a speech,” he said, according to the New York Tribune. “I have no sufficient time, if I had the strength, to repeat speeches at every station where the people kindly gather to welcome me as we go along. If I had the strength, and should take the time, I should not get to Washington until after the inauguration, which you must be aware would not fit exactly. [Laughter.] That such an untoward event might not transpire, I know you will readily forgo any further remarks; and I close by bidding you farewell.”

As can be imagined, Lincoln’s appearance here, for many residents, was recounted into their old age. When John Schouten, who grew up in Matteawan (now Beacon), died in 1938 at the age of 86, his obituary notice in the Beacon News noted that, as a 9-year-old, he had shaken Lincoln’s hand that day. (How he got close enough to the train to do so must have been a story in itself.)

Four years later, on April 25, 1865, the Lincoln Special returned to the Fishkill Landing depot, this time carrying Lincoln’s body. Carl Sandburg, who wrote a biography of Lincoln, noted that the village had decorated the depot with a sign made up of evergreen boughs the read “In God We Trust.” Residents “crowded both sides of the tracks” and delegations came from Newburgh, New Paltz and other towns.

Another connection to Lincoln … 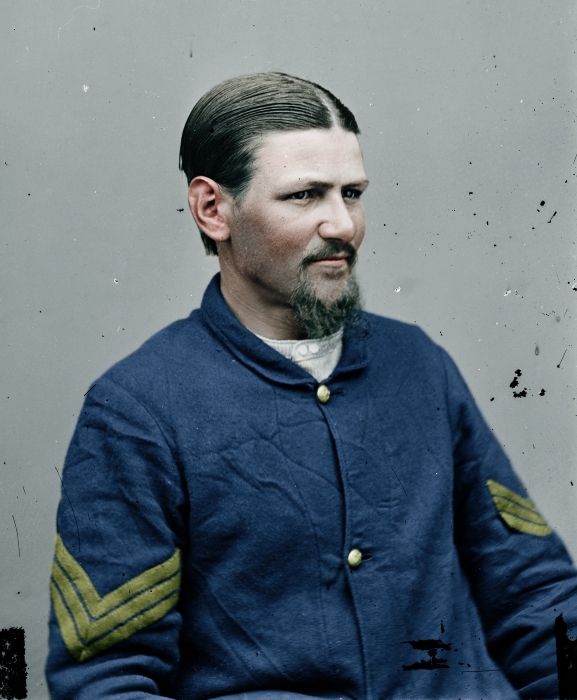 Boston Corbett
(Photo by Matthew Brady; colorization by My Colorful Past)

Thomas “Boston” Corbett, the man who, defying orders, shot and killed John Wilkes Booth, Lincoln’s assassin, once lived and worked in Matteawan. As a member of the federal troops searching for the fugitive, he shot Booth through cracks in the wall of a burning tobacco barn where the actor was making his last stand in Port Royal, Virginia.

Corbett said he fired when Booth pointed his pistol at the troops. But according to one account, a government detective shouted at Corbett: “What on earth did you shoot him for?” Corbett said “God Almighty” told him to do it.

Shortly after Booth’s death, the Fishkill Standard printed a short, cryptic item that said Corbett was a former Matteawan resident who had worked for the Seamless Clothing Co., attended the Protestant Methodist Church “and was known as an ardent and zealous Christian, if not a fanatic” who was “always singing.”

A letter written to the editor by a resident named Joseph Coldwell in 1902 tells more:

He was short in stature, he was of light complexion, but he did part his hair in the middle. He had the letters T.C. tattooed on his arm, and when asked to explain, said he was converted in Boston [in 1858], and like Saint Paul after his conversion, changed his name.

He was a wool hatter by trade and worked for John Falconer, who conducted the business of the Seamless Manufacturing Co. on the west side of the Fountain Street Bridge [now 1 East Main St.], where I learned my trade, and which now is the Carroll Hat Works.

He was overzealous religiously. He taught a Bible class, of which I was a scholar, in the Union Sunday School. He shot Booth without orders, and was praying when he pulled the trigger. The money he received for the act was all given to Christian Societies, and he died poor and almost friendless. He was a strong trade union man, and used the strongest, most pointed language, I think, that I ever heard an employee use on any occasion when he was appointed on a committee to wait upon the bosses.