Fall down seven times, get up eight

I’ve noticed a pattern in the columns in which I write about myself: I go outside, fail, and we all have a good laugh. Failure is a lot more fun to write about than success, and I tend to break out in hives when I do anything that can be even remotely qualified as bragging.

However, the saying “No failures, only lessons,” is one that ultrarunners take to heart, because any endurance sport is going to involve (to put it mildly) lots of lessons. And sometimes you have a day in which you apply everything you’ve learned and find yourself succeeding. 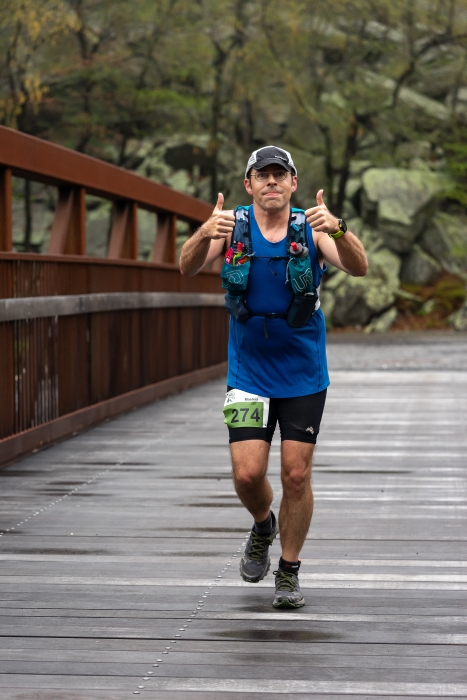 See? It’s not all bad. (Photo by Maryalice Citera)

I ran my first 50-mile race in November 2017. It was the storied JFK 50 in Maryland, the oldest ultramarathon in the country, founded by President John F. Kennedy in 1963. It has a time limit of 13 hours, but I was shooting for 12 hours, which would qualify me to run the Vermont 100 Miler, one of the four races that make up the grand slam of ultrarunning. I figured if you have a chance at getting into the grand slam of anything, you have to go for it.

I learned many lessons that rainy November day. For starters, the only thing that prepares you to run 50 miles is running 50 miles. I also learned that getting removed at the 45-mile checkpoint of a 50-mile race because you’re running too slowly really sucks.

I put the 12-hour goal on hold and vowed to run 50 miles under 13 hours, the time I failed to achieve at the JFK. I spent the winter training harder than I ever had, including adding core-building exercises such as crunches and pushups to build my endurance. I hate exercise that isn’t running, because it isn’t fun and you’re not outside. But you know what I hate more? Getting timed out at Mile 45 of a 50-mile race. So I did the damn pushups.

A few months later, I ran the Rock the Ridge 50-miler in the Shawangunk Mountains. It rained all day — cold rain. Fortunately, it had also rained during the JFK 50 and I learned to suck it up. I finished in 12 hours and 35 minutes and spent the next few days blissfully floating. And I started training even harder.

Last weekend I returned to the Shawangunks to run Rock the Ridge again. I started the race feeling confident, which is an unfamiliar feeling. There were no collapses, no downpours, no moments when I questioned my sanity. I did not feel like a loser trying to nerd his way through an endurance challenge. I felt as if I belonged.

At the Mile 30 aid station, I overheard a conversation between a volunteer and a medic riding a mountain bike. “So far, everyone’s looked fine,” he said. The volunteer replied, while jerking his thumb in my direction, “Anyone hitting Mile 30 at this point is going to be at least reasonably fit and adequately trained.”

Reader, I almost cried. Being described as “reasonably fit and adequately trained” is the nicest thing anyone has ever said about me.

There was a sickening, familiar feeling during the last 5 miles of the wheels coming off, of no longer being able to keep pace, of realizing that your GPS watch is off and you aren’t quite sure how long you have to go, and then realizing where you are and that you are going to have to run the last three-quarters of a mile faster than you ran the previous 49.25 if you are going to make it in under 12 hours.

Now for some cold water on this inspiring story: I finished 145th of 400 runners. Add in the runner who finished at 11:59:50, and that makes 146 of us who ran the course in under 12 hours. That is not a rarified accomplishment. I did not qualify for the Olympics. I can merely say that I am pretty OK at running. My reward is that I am allowed to apply for a race that’s twice as long with almost four times the elevation, held in the humid death grip of high summer in Vermont and occurring simultaneously with a 100-mile horse race (watch where you step).

At the same time, it felt like the Olympics as I charged up the final hill while a large red digital timer clicked toward 12:00:00 and 100 people, most of them with shiny medals around their necks and cold beers in their hands, screamed and clapped and yelled encouragement. After I crossed the finish line, I grabbed a hot dog and screamed my head off for the next hour with everyone else at each runner who came up the hill, all of us united in the fact that we had learned some painful lessons.