But don’t panic — your taxes may not go up

Many property owners in Beacon were surprised last week when they received the city’s 2019 property assessments in the mail and discovered nearly across-the-board increases of 10 percent.

Residents took to social media to air their grievances; one thread on Facebook had nearly 500 posts, with many people expressing concern that taxes would be going up.

However, that’s not always the case, state and local tax officials say.

“A higher assessment isn’t necessarily a reason to panic,” explained James Gazzale, a representative for the state tax department, who noted that it’s possible for an assessment to increase but taxes decrease, or vice versa. 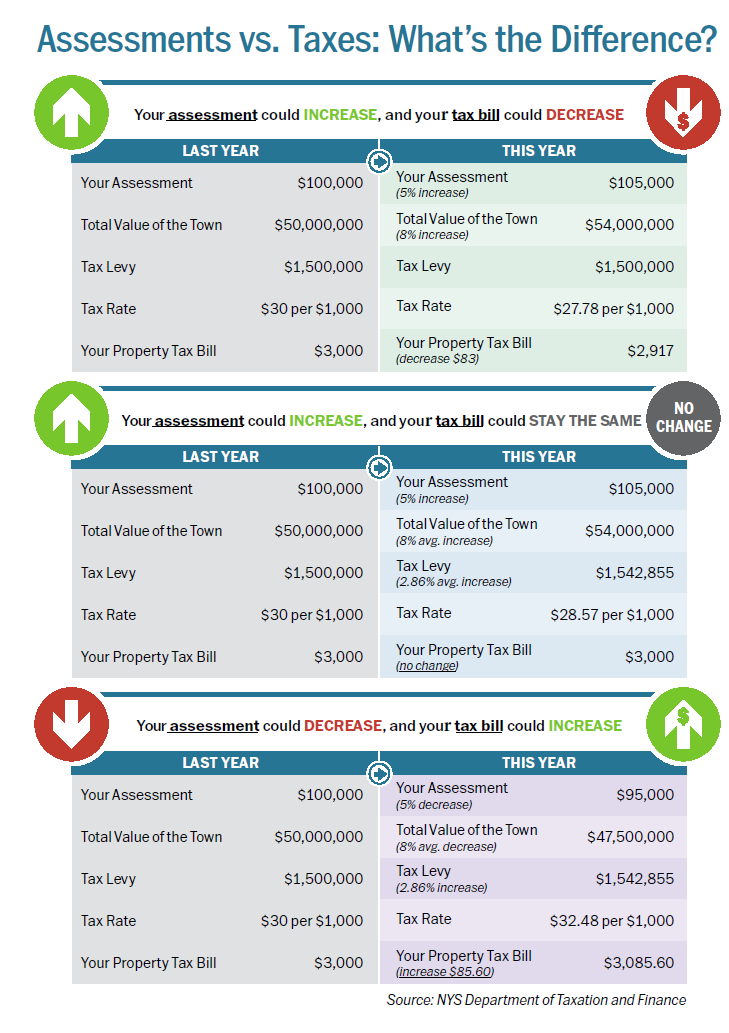 What typically make your taxes rise is an increase in municipal or school district spending. Beacon property owners pay taxes to the city, Dutchess County, the Beacon City School District and the Howland Public Library District, each of which has its own tax levy, or a percentage of its budget it’s allowed to raise through taxes.

In Beacon, new construction added $30 million of assessed value, which could contribute to a tax rate decrease and assists in spreading the tax levy across a larger base while giving residents more equity in their homes.

Each of these factors — not just the value of an individual property — impacts what a household pays. For instance, the state Department of Taxation and Finance offers these scenarios (see chart above):

The tax rate has decreased in Beacon over the past three years, “and this should be a fourth one,” said City Administrator Anthony Ruggiero. As assessments go up, the city can make improvements in the community “without going back to the residents and taxing them at a higher rate.” He cited Beacon’s after-school program and the city pool as benefiting from increased property values. “It makes the city more attractive,” Ruggiero said.

How to Appeal Your Assessment

There are no appointments; cases are heard on a first-come, first-served basis. A standardized appeals form (RP-524) can be downloaded at bit.ly/grievance-form and should be completed before arrival. The board may ask for supporting documents such as comparable properties that have lower assessments.

If an appeal is denied, a property owner may go to court to request a Small Claims Assessment Review. For more information, see bit.ly/grievance-booklet.

If you’re curious, here’s how your Beacon home got that 10 percent boost in value.

Homes and other properties are reassessed each year in Beacon, explained Kathy Martin, the city’s assessor. But if a municipality’s assessed values appear to be out of whack with market values, it can order a comprehensive review to get them re-aligned. That last happened in Beacon in 2007.

This year, after a comparison of the city’s previous assessments with similar sales, the value of nearly every residential property in Beacon (with the exception of a few properties Martin said were over-assessed or upgraded) was bumped up 10 percent to better reflect market value, or what a home would actually sell for.

“What it means is that your market value has gone up but, effectively, the tax rate should come down because everyone went up uniformly,” she said.

Market values everywhere decreased after the 2007 review, so assessments in Beacon followed suit, going down 22 percent over the next several years. Then, as the market recovered, home values increased 3.5 percent last year, while commercial property values increased by almost 10 percent.

“Thankfully Beacon has seen wonderful growth in its property values,” Martin said, “and that’s been a long time coming. Who doesn’t want their house to be worth more? It’s a good thing. Building equity in your home is a positive thing.”