Cold Spring Mayor Dave Merandy urged residents to “go to the source” with concerns over recent discoloration of village drinking water, rather than relying on Facebook discussions. He made the comments at the May 14 meeting of the Village Board.

Merandy advised residents to call the village office or Superintendent of Water and Waste Water Greg Phillips, pointing out that Phillips has managed the system for 25 years and has dealt with discoloration “probably twice a year” throughout that time.

“When we’ve had so much rain, there’s really nothing much you can do,” Merandy said. 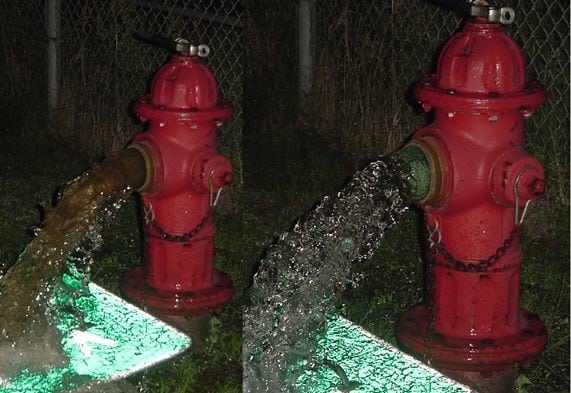 The before and after of a hydrant’s flow during a flush. (Village of Cold Spring)

Philips agreed. “It’s a little aggravating” to learn of complaints only through social media, he said. “People should call us. We have done sampling on-site when people are concerned.” He added that rust, inherent in the century-old water system, is a big part of the problem.

An overnight hydrant flush scheduled for May 19 to 24 should take care of much of the discoloration Phillips said, though he cautioned, “there is always some residual discoloration” when that procedure is undertaken. (The village says residents may notice periods of little or no water between 9 p.m. and 4 a.m. and discoloration each morning. It advises to run the cold water until clear.)

“If someone out there has a miracle way of cleaning pipes that are 100 years old, let us know,” Merandy added.

The hydrant flush uses the velocity of the water to scour the lining of the mains to remove loose particulate, film or sediment that has built up since the last flush.