The Haldane and Beacon softball teams squared off Wednesday at Beacon High School, with the Blue Devils coasting to a 14-5 victory.

Shianne Twoguns of Haldane picked up the victory against Beacon, while Olivia Ciancanelli took the loss for the Bulldogs. 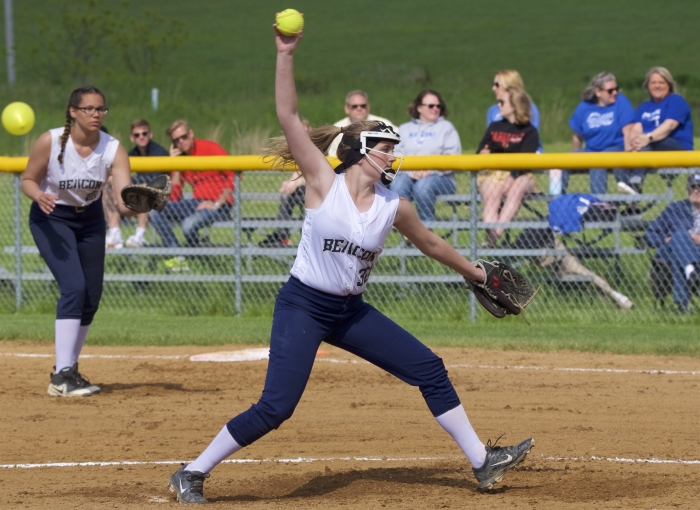 Beacon’s Olivia Giancanelli delivers a pitch against Haldane on May 15, the first game of a doubleheader for the Bulldogs. (Photo by S. Pearlman)

“I was proud of the girls because they kept fighting until the end,” Beacon Coach Brian Antelak said. “We put three on the board in the seventh inning, so I was proud of the way they always work hard and never give up. That bodes well for us going into sectionals.”

In the second game of a doubleheader for Beacon, the Bulldogs defeated visiting Peekskill, 23-2. Senior captain Kamryn Haran picked up the complete-game win on the mound, allowing two unearned runs on one hit, with five strikeouts.

“She comes up big when we need her,” Antelak said. 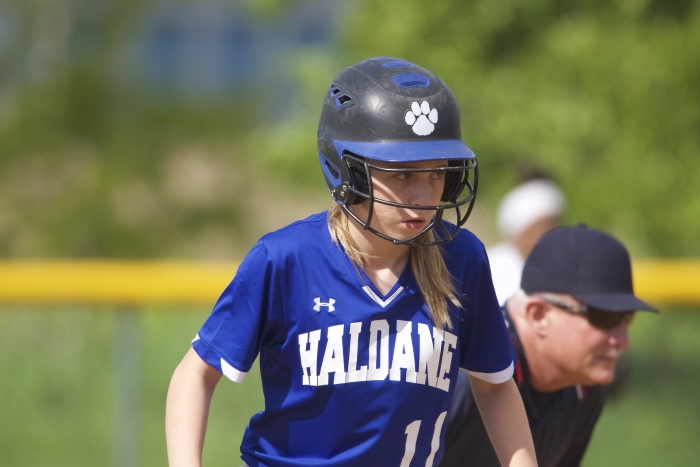 Haldane’s Mary Mikalsen watches the plate while on second base against Beacon (Photo by S. Pearlman)

Senior centerfielder and team captain Lia Muscat had a productive afternoon, going 4-for-5 with a double, a triple and a career-high nine RBIs. Jordana Caputo had a triple and four RBIs, and Zukowski went 2-for-3 with three runs scored. Haran also drove in two runs.

“Lia was locked in,” Antelak said. “It was great to see both captains have a great day in their last home game.”

The Bulldogs finished their regular season with two losses (7-0, 21-5) at Hendrick Hudson in a doubleheader on Thursday (May 16), while Haldane ended its season on May 17 with a 6-1 victory over Dobbs Ferry.

After finishing the regular season with two decisive wins over North Salem and a 14-2 record, the Haldane boys’ lacrosse team received a bye in the first round of the Section 1, Class D playoffs. The No. 3 Blue Devils defeated No. 6 Dobbs Ferry (13-5) in overtime on May 17, 13-12, to advance to the third round when Haldane travels to face No. 2 Briarcliff (13-4). The winner advances to the championship game. 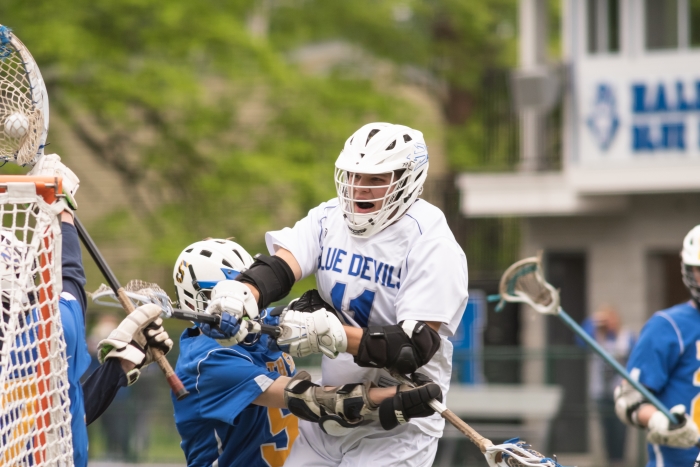 The goalie for North Salem makes a nice stop as Will Westerhuis of Haldane fires from close range. (Photo by Amy Kubik)

The Beacon girls’ lacrosse team, which finished 2-14, did not qualify for post-season play.

The Beacon High School squad snapped a two-game losing streak with an 8–0 victory over Sleepy Hollow last week to close out its regular season. The Bulldogs finished 12-7-1 and received the No. 8 seed among 20 teams in the Section 1, Class A playoffs. It will host No. 9 Harrison (11-9) on Monday.

Against the Headless Horsemen, Matt Monzoeillo threw a complete-game shutout, striking out eight batters without allowing a walk. At the plate, Kai Jacketti and Monzoeillo both homered, and Andrew Schneider and Mike Lepere each had two-run doubles.

After rattling off five wins in a row, Beacon had dropped back-to-back games the week before against powerhouse Lakeland, and Tappan Zee.

At Haldane, the baseball squad received the No. 4 seed in the Section 1, Class C tournament and will face No. 1 Tuckahoe (16-4) in a first-round best-of-three series that begins on Saturday, May 18, at Tuckahoe.