Impertinent parrot gets by on a (partial) wing and prayer

It’s not always easy living with a colorful local celebrity, especially one who saunters around the house, getting into mischief and talking back. But for the last 10 years, that’s been my lot with Hoss, the only macaw to ever claim the “best pet” award at the Cold Spring Fourth of July parade.

Hoss and I met in 2009 after I paid a visit with a friend to a pet bird shelter then based in southern Dutchess County. He was looking to adopt a shelter parrot (and subsequently did).

But my husband, Mike, and I already had three parrots, including a large macaw. We didn’t really “need” a fourth bird. However, at the shelter I mentioned that I’d like to have a second macaw … someday. About 48 hours later, the shelter director asked if I’d be interested in a new arrival, Hoss, a blue-and-gold macaw, retrieved from an animal shelter near the Canadian border that was unable to deal with him. 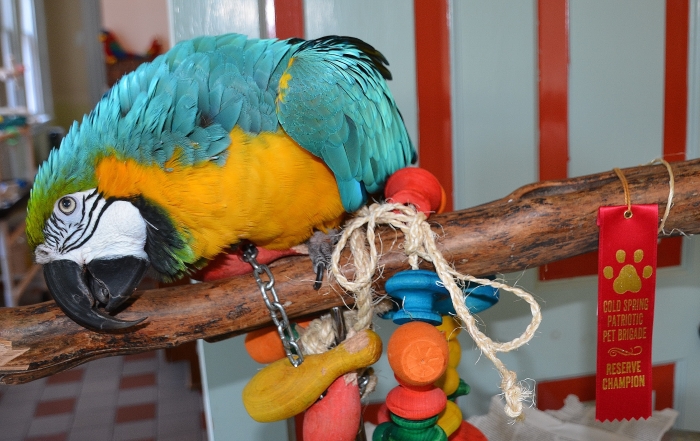 Hoss with his ribbon from the Cold Spring Patriot Pet Brigade (Photo by L.S. Armstrong)

I knew upfront that Hoss had handicaps: His legs are abnormally short and he has only four toes instead of eight, both probably due to congenital defects. He’s also missing about a third of each wing, lopped off by humans, possibly poachers, so he can never fly. His background remains murky; we don’t even know his age, though because he’s getting cataracts he’s almost certainly over 40. (Macaws can live to be 80 to 100.)

Someone, somewhere, named him Hoss, because he was calling himself that by 2009. Was it a tribute to Hoss Cartwright, who sometimes limped on Bonanza? Perhaps. But in Chaucer’s time, hoss meant to flit merrily or buzz around like a bee. So it makes sense that way, too.

I visited Hoss for a month at the shelter to make sure we got along. Once we brought him to Cold Spring, we soon learned how smart he is, as well as being extremely good-natured, despite whatever horrors he might have experienced.

He greets his avian stepbrothers with an exuberant “Hi!” each morning, and his repertoire includes “I want to take over,” “Look at that,” and “What are you doing?”

When riding in a car, he exults with “Wheeeeee!” If I take him for walks down Main Street in a mesh backpack, he greets passersby.

Perhaps he lived with an elderly woman for a while, because at bedtime he goes into a sing-song riff, in an old woman’s voice, declaring that “it’s just so awful” and “I just don’t know,” as if complaining about neglectful grown children. He also appears to engage in “conversations.” A few examples follow, duly recorded by his slave-and-chronicler:

I put Hoss to bed and left to cover a meeting. When I returned at 11 p.m., I realized I had not given Hoss fresh water. So I crept into the darkened living room, where we keep his cage. When he stirred, half awake, I tried to reassure him. 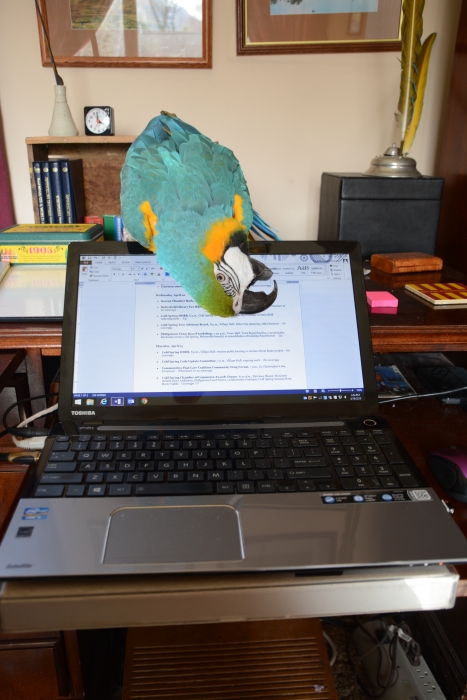 Hoss demands his owner pay him some attention. (Photo by L.S. Armstrong)

Hoss shook himself awake and walked down his perch toward his dish.

It was a beautiful July day. I decided to take Hoss outside.

Nevertheless, he climbed on my arm and we went out on the lawn.

Hoss loves to perforate old bath towels with his beak. One afternoon, after he had turned one to shreds, I offered a replacement.

Liz: “Look, Hoss, here’s a fresh blankie for you.”

On another occasion, Hoss was perched on his portable platform in the kitchen while I made cookies. Suddenly he climbed down and wandered off through the house. I coaxed him back and spread a blankie on the kitchen floor to occupy him. He hunkered down on it, grumbling: “Oh, that’s the worst. Worst. Worst. … Sit on floor.”

After Hoss came to live with us, we covered a window near his cage with a plastic liner to prevent drafts. We returned from Boscobel one summer night after a tremendous thunder-and-lightning storm. When I checked on Hoss, I noticed the liner was lying next to his cage. It apparently had been torn lose by the wind coming through a tiny gap in the window frame.

Liz: “Gee, I guess that was pretty wild, Hoss.”