Turns out, all it took was a pot of home-cooked chili. That’s what photographer Stan Goldblatt had to offer to the Appalachian Trail hikers he approached at Bear Mountain’s Hessian Lake, asking if they would come to his home studio in Fort Montgomery so he could take their portraits.

“Some looked at me like, I don’t know who this guy is, and I don’t want to know,” he recalls. 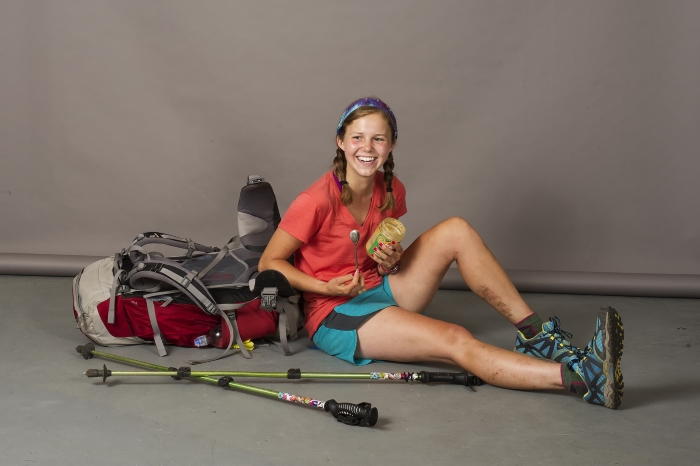 “Spoons said she got her trail name because she always carried two long spoons to get to the bottom of peanut-butter containers. I asked her to sit down and do just that.”

Goldblatt said he would recruit hikers by waiting at the bottom of the trail, at Perkins Drive, sitting on a bench, with his dog. “You can tell when an AT hiker is near — there’s a certain look — a certain smell, too,” he says. “I’d explain the project, show them the photos I had already taken, and tell them: ‘There’s a big pot of chili on the stove for you.’ ”

Those turned out to be the magic words that convinced 166 hikers to participate. Year after year, like a migratory species, Appalachian Trail hikers turn up in mid-June in Fort Montgomery, frequently visiting the post office to pick up pre-arranged mail drops of food and supplies. 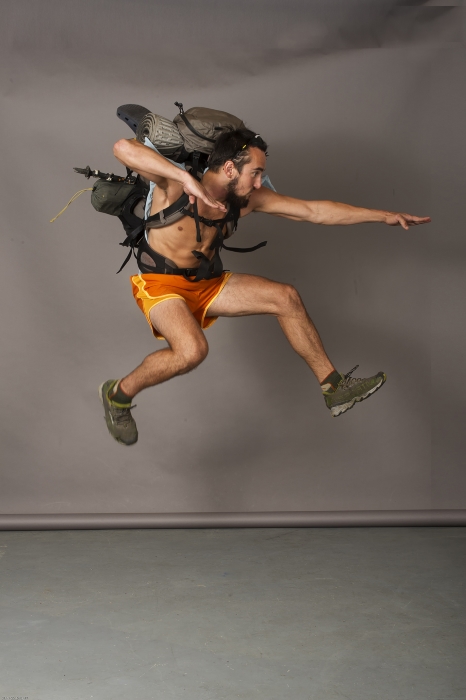 “Stevie Wander asked me, ‘Do you mind if I take my shirt off? That’s how I hike.’ Then he asked if he could do an action shot.”

Many of the photos have been assembled for an exhibit, Portraits of Hikers on the Appalachian Trail, that runs through Oct. 4 at the Highland Falls Library.

Goldblatt began approaching hikers during the summer of 2014. He says their diversity surprised him. The youngest was 8 years old, part of a family of four. The oldest was 66 and a former Space Shuttle pilot. By the time he met the hikers, each had walked about 1,400 miles of the 2,285 total. Most of the hikers are traveling from Georgia toward Maine, expecting to finish in September.

He initially hoped to create studio portraits of 50 to 60 people but says he found the process easier than he expected. If a hiker appeared uncomfortable while being photographed, Goldblatt says he would offer suggestions, such as “lean on your [walking] poles” and “don’t forget to take a breath.” Also: “Be who you are when you’re on the trail.” 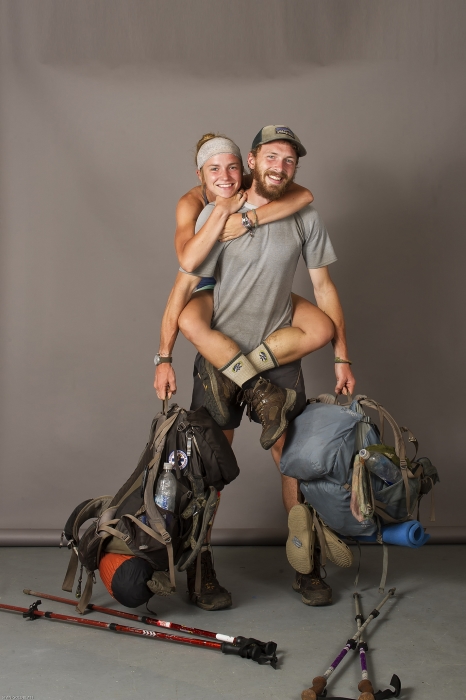 “The girl [Teton] jumped on Moose’s back, then he picked up two backpacks — that’s how they hiked! I photographed them individually, as well. They got to be themselves.”

Hikers never use their real names, Goldblatt explains, “because there could be 50 Steves. They need something more unique. Their trail names are given to them by fellow hikers. There are little journals along the way and they leave notes, signed with their trail name.”

Goldblatt says he has a new photo series in mind; he wouldn’t reveal any details but says “the logistics are kind of daunting.” One thing is certain, though: “No more chili.”