The Haldane High School lacrosse team, seeded No. 3 in the Section 1, Class D playoffs, defeated No. 6 Dobbs Ferry in dramatic fashion on May 17, winning in overtime, 13-12, but three days later ran into No. 2 Briarcliff, which ended the Blue Devils’ historic season.

After finishing the regular season with two decisive wins over North Salem and a 14-2 record, Haldane received a bye in the first round of the tournament. Had the team defeated Briarcliff, which won 12-7, it would have faced No. 4 Pleasantville (13-6) in the title game on Thursday. Instead, it was Briarcliff, who defeated Pleasantville — the defending state champs — in overtime, 9-8. 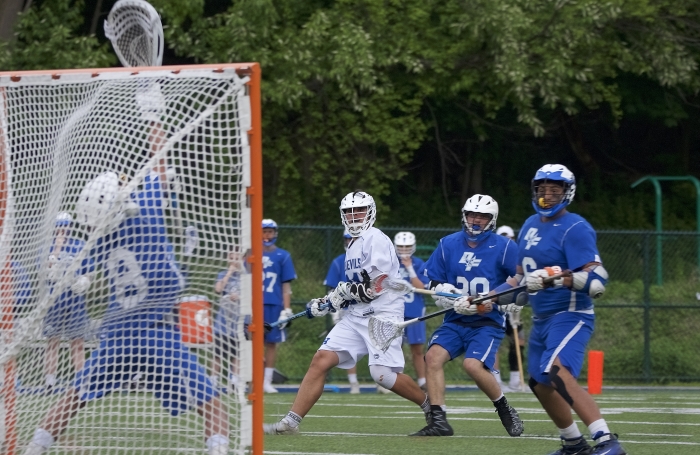 Haldane’s Darrin Santos (in white) scores the game-winner in overtime on May 17. (Photo by S. Pearlman)

“We felt like we needed to execute to perfection to have a chance” against Briarcliff, said Coach Ed Crowe. “We played our best game of the year, and we had to — they’re ranked No. 2 [in Class D] in the state” as  of May 20; Haldane was ranked No. 13.

“We got three goals in the third to make it a close game,” Crowe added. “It was only in the last few minutes they pulled away. I couldn’t ask for a better effort.”

The Blue Devils, who finish at 15-3, had never advanced so far in the regionals. With its first league title, its best record ever, and its first victory over rival Putnam Valley, Crowe was liking what his team accomplished.

“It’s never easy to be the smallest school in Section 1, and the kids did everything that was asked,” he said.

“I can’t say enough about the character of this team,” Crowe said. “They played from behind, from ahead, they never gave up, and it was a fantastic season.”

In the loss to Briarcliff, Giachinta had five goals and two assists, and Beachak and Santos each had a goal. John Hankel tallied 22 saves in goal. 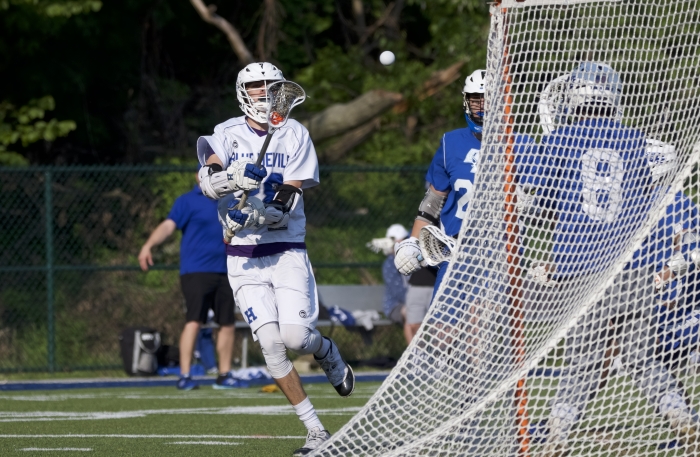 Jagger Beachak puts a shot on goal — and scores – against Dobbs Ferry on May 17. (Photo by S. Pearlman)

Haldane reached its first semifinal thanks to its thrilling victory over Dobbs Ferry (13-5) in the quarterfinals. Haldane came back from four down in the third quarter to tie the game, and from two down in the fourth. With the teams trading goals, the Blue Devils tied it at 12-12 with 4:24 remaining.

Less than two minutes into the sudden-death, Santos took a pass from Beachak and buried it from 12 yards out.

Giachinta ended the game with four goals and four assists, Besim Diba notched a hat-trick and two assists, Beachak had a hat-trick, Santos had two goals and one assist, and Will Westerhuis had a goal. Hankel had 15 saves.

“John played phenomenal in both games,” Crowe said of his goalie. “He kept us in it against Briarcliff, and against Dobbs in overtime he came up with a huge pass that started the game-winning play. And for Sam to produce the way he did in both games [nine goals, six assists] as a two-way midfielder, I believe he’s the best player in our area. Brad Dowd neutralized their faceoff guy for us, and gave us good defensive play overall.”

Giachinta called it “one of the craziest games I’ve ever been a part of. We don’t let the goals [deficit] affect our mentality, we just try to get back in the game in any way possible.”

Mame Diba said a key was that the Blue Devils kept their composure. “We struggled on ground balls and turned the ball over a bit, but we played well,” he said. “This is an amazing group of guys, and it’s been a great season.”