John Tilford of Nelsonville reported that he had been returning on the river from Newburgh when he helped rescue an intoxicated man, Patrick Lynch, who had jumped into the river. Tilford and others were barely able to keep Lynch from jumping back into the water.

Gas pipe leaks at the corner of Main and Chestnut killed five maples on the east side of Chestnut — “standing monuments of the poisonous effects of coal gas upon the roots of trees,” according to the Cold Spring Recorder.

After Willie Pelham returned to his father’s jewelry store on Main Street (where he sleeps) to find the rear door ajar, he cocked his revolver to search for the thieves he suspected (incorrectly) were hiding inside. A sudden start discharged the pistol, and Pelham shot himself in the left hand.

J.B. Bosseau of Highland Falls sent a check for $45 to J. Goodsell of Newburgh, but the “J” looked so much like an “I” that the post office gave it to Isaac Goodsell, who cashed it. When Joseph Goodsell found out, he had Isaac arrested.

A valuable team of horses owned by Samuel Avery was standing unfastened in a yard when it jumped over the wall, ran down Paulding to Chestnut and onto Wall and then to Furnace, where they fell and the mare broke a leg, rendering her useless.

Twenty-six trees planted last spring made a continuous line from Division Street in Nelsonville to Furnace Street in Cold Spring. The village advised homeowners opposite the trees to position tying posts so their horses could not reach the bark.

Pete Daly, 9, was caught in Mrs. Truman’s house on Chestnut Street stealing from her pocketbook. A repeat offender, he was sent to the House of Refuge but escaped. Two days later, he showed up at the slaughterhouse of O.H. Speedling, saying he had “lived on briars.” The sheriff took Daly to New York City, “where it is hoped he will reform.”

The president of the Village Board tightened enforcement of an ordinance against fast driving. “The speed at which half of the horses are driven on Main Street is too great,” noted the Recorder.

William Entrott of Cold Spring was hired as a keeper at Sing Sing prison. 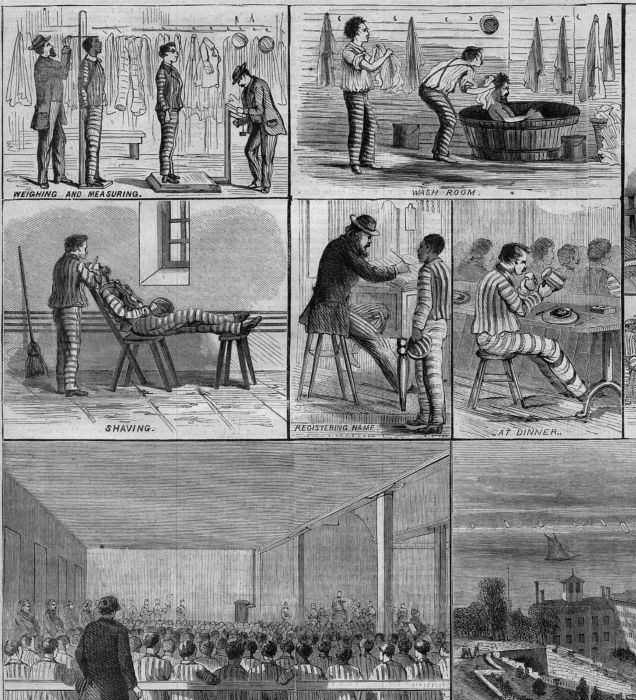 Scenes from Sing Sing prison about 1867

The first open-air concert of the season was presented at the bandstand by the Kemble Cornet Band, which had purchased new uniforms.

Two men who inquired at S.B. MeKeel’s store in Nelsonville if the clerk had any chewing gum were directed toward cakes of Fleischmann’s yeast, which resemble gum. When the clerk turned his back, the men began to “sample” the stock. Within a few moments they were rolling on the floor in gastrointestinal distress.

Complaints were heard that several shopkeepers were selling cigarettes to minors.

William Church Osborn, who represents Putnam County in the Constitutional Convention, was said to personally support giving women the right to vote but believed it should be left up to the legislature.

The men employed in the brickyards between Cold Spring and Fishkill went on strike for better wages but most returned to work after receiving a counteroffer — work for the same wages, or don’t work at all.

The Ordinance Committee recommended several changes to the Village Code:

Repeal Section 2, Chapter 1, which reads: “No boy shall at any time after sundown engage in any play, or game, or sport which shall cause any running, or noise, or other disturbances in the Village of Cold Spring, under penalty of $3 for each offense.”

Amend Section 4, Chapter 1 to read: “The discharge of firearms, or of fireworks, except one week previous to Fourth of July, or one week thereafter, will not be permitted.”

Amend Chapter 7 to require licenses to peddle meat, fish, fruit, vegetables or general wares from a wagon, cart or sleigh ($10), or without ($4). In addition, set fees for circuses ($15 a day, plus $3 per sideshow); menageries ($10); minstrels, illusionists or spiritualists ($3); and panoramas and “exhibitions of natural or artificial curiosities” ($2).

Repeal the license requirement for “hacks” who convey passengers on stages, coaches or wagons.

A village trustee reported complaints that water from the village pumps was being wasted. It was referred to the Water Committee. 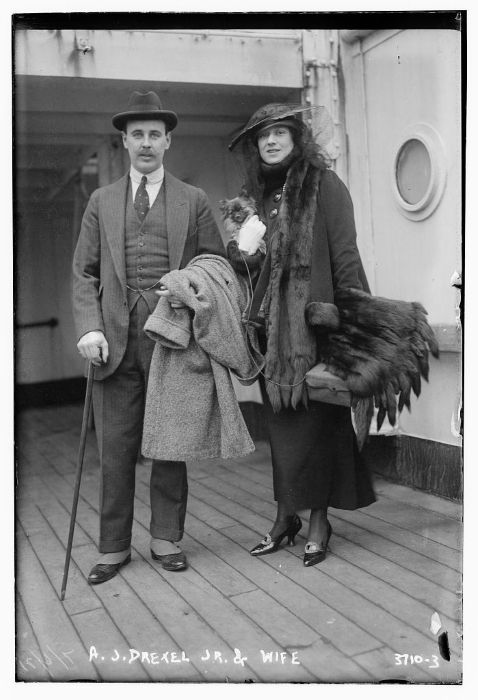 Anthony Joseph Drexel Jr. and his wife, Margarita, in 1916 (Library of Congress)

The village president reported that the property tax rate would increase by 11 cents, to $4.75 per $1,000 of assessed value, largely because of a new law that exempts church parsonages.

The Village Board increased the lamplighter’s salary to $25 per month from $22.50.

The 285-foot yacht Margarita, owned by Philadelphia banker Anthony Joseph Drexel Jr. and named for his wife, dropped anchor off Garrison. It carried a crew of 64 men.

A complaint was heard about a farmer who lived south of the village and parked his horse on Main Street for 10 to 12 hours while he visited the saloons.

After a report that Thomas Ashcroft had disappeared, and was supposed to have committed suicide by drowning in the Foundry pond, William King spent most of a day dragging the water without success. The mystery was solved when Ashcroft returned on the train Sunday evening after visiting friends in New York City.

The governor signed a bill that required an 8-foot-wide horse lane on the side of every newly constructed road.

Trees along Main Street were being trimmed in anticipation of the installation of the new electric light system.

George McAndrew, while crossing Main Street, was hit and knocked down by an automobile whose occupants stopped long enough to make sure he was all right. 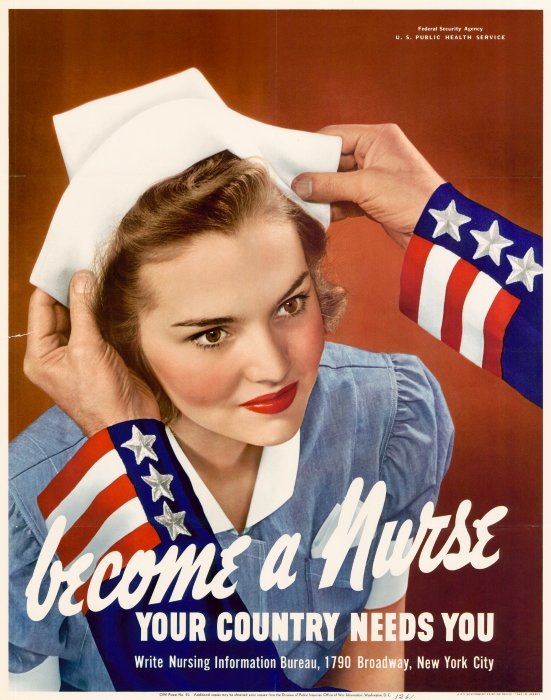 Public health nurses were a familiar site in 1944.

The Philipstown Public Health Nurses [U.S. Cadet Nurse Corps] — whose blue uniforms and small black bags were a familiar site around the village as they responded to an average of 320 calls each month — began raising funds to replace the corps car, which had more than 65,000 miles on the odometer and broke down often. The pupils of Helen Jimenez announced they would perform a musical revue, Echoes from the Hayloft, at the Haldane Central School as a fundraiser for the cause.

There were numerous complaints about commuters who took up more than one space when they parked along the wall at the foot of Main Street and in the Depot Plaza to catch the train.

The body of Daniel Farrell, 67, was found on rocks next to the Hudson near the Garrison Coal Co. by two Garrison boys. A resident of the Westchester County Home, Farrell apparently was sitting on the dock when he suffered a heart attack.

Allyson Yates of Cold Spring was named valedictorian and Charles Eaton  of Nelsonville the salutatorian of the Haldane Class of 1969.

The First Presbyterian Church of Philipstown dedicated the George W. Perkins Library to mark the completion of Phase II of its building program, which included a new organ and air-conditioning.

The Friends of the Butterfield Library assembled a rest area for the annual Cold Spring flea market.

The Haldane Board of Education began discussions about constructing a separate elementary school building. The district had already purchased a 10-acre plot for $28,000 from the Fathers of Mercy that adjoins and is east of the Haldane school property near Route 9D.

Fourth-graders from the Garrison School visited the Mother Lurana Social Center to ask seniors what life was like before TV, indoor bathrooms, airplanes, washers and dryers, refrigerators, fast food, central heat and supermarkets. The children also heard about the ice man, the milk man, the egg and bread man, the vegetable peddler, the coal man, the scissor sharpener, the tin man and the rag man.

The Cold Spring Hotshots won the annual Putnam Highlands Birdathon, spotting 162 species in a 24-hour period, nearly toppling the record of 165 set the year before.

Maria Galarza-Lindner won a seat on the Haldane school board with 514 votes. Solange Muller received 392 and Dave Merandy got 253.

In Garrison, the school budget, which included a 4.8 percent tax hike, was approved by a vote of 256-216, and two challengers unseated incumbent Trustees Eric Richter and Dean Anderson.

State Sen. George Pataki, a resident of Garrison, won the Republican nomination for governor. At the same time, Assemblyman Vincent Leibell announced his candidacy for the seat Pataki vacated to run for the higher office.

After 20 years in business, Mary Fauteux closed her antique store to begin a four-year physician’s assistant program at a West Virginia college. She opened the shop in 1974 after moving to Cold Spring from Minnesota.