Pie — food cooked in flour-water paste or dough — has been around since the beginning of civilization. The earliest Greek and Egyptian examples were hand-fashioned containers in which meat was cooked, ostensibly sealing in the juices and flavor.

The Brits unappetizingly celebrated this feature by referring to their earliest emblematic meat pies as coffyns (coffins). This was the precursor to en croute (“in crust”) cooking, a technique brought to its cultured apotheosis by the French.

But truth be told, the pie was initially a crude culinary kluge, as much a practical solution to the absence of kitchenware as anything we would recognize as a recipe. Pie dough was little more than the material from which these makeshift casseroles or desserts got cooked in a time of few or no baking pans. Pie-making served equally well for cooking, storing and transporting.

That’s to say pie — or rather, pie crust — was less a recipe than a technique, used widely and unceremoniously, for cooking what-have-you, savory or sweet. The process was perfunctory, casual and rustic: the crust was most likely not even meant to be eaten, and a far cry from the precious and peculiar recipes that intimidate the contemporary (well, at least this particular) home cook. 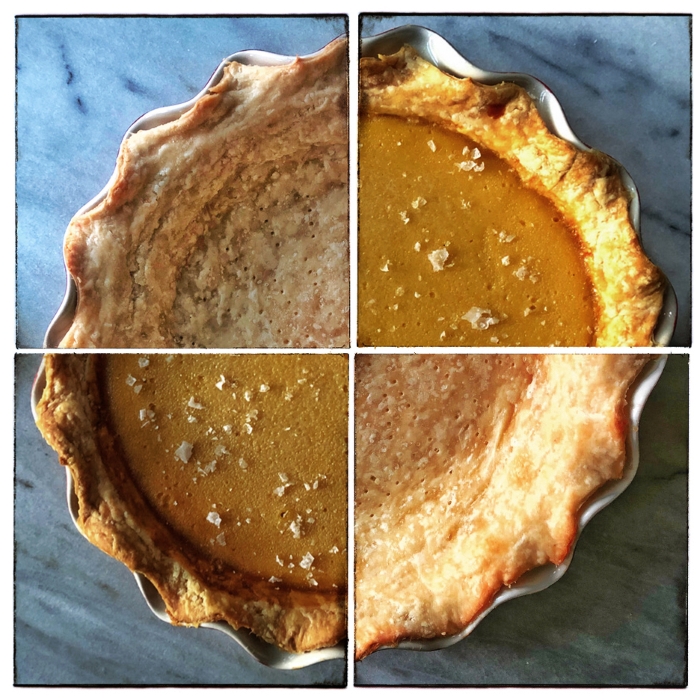 There are people, however, who make the magical formula look preternaturally easy, and my friend Susan is one of those people. She can knock out a perfect pastry and rustic tart — mixing bowl to oven — in what seems like five minutes, without breaking a sweat and hardly measuring things.

Anticipating the sweet season of fruits and berries, the season most identified with the classic and archetypal “pie,” I consulted the master.

Susan’s recipe is a mere five ingredients: flour and water, sugar, salt and butter. The operative words and instructions for mastery are “cold” and “fast” — everything must be kept cold (including the flour, which she keeps in the refrigerator, and the water, which is iced). If the butter gets too soft, a trip to the fridge is in order. Work fast and loose by hand and with little ceremony for a light, flaky crust.

Susan specifies organic, unbleached all-purpose flour (Bob’s Red Mill is her go-to) and high-fat, unsalted European-style butter (Kerrygold, Plugras). The dough must rest, refrigerated, between mixing and rolling it out to allow glutens a chance to “relax,” making for more elasticity and avoiding breakage. The prepared dough is rolled out as quickly as possible and chilled once again in the pie pan before ultimately being baked.

Her recipe is easily doubled for a two-crust pie, or the mixed and wrapped unformed dough can be frozen for convenience. 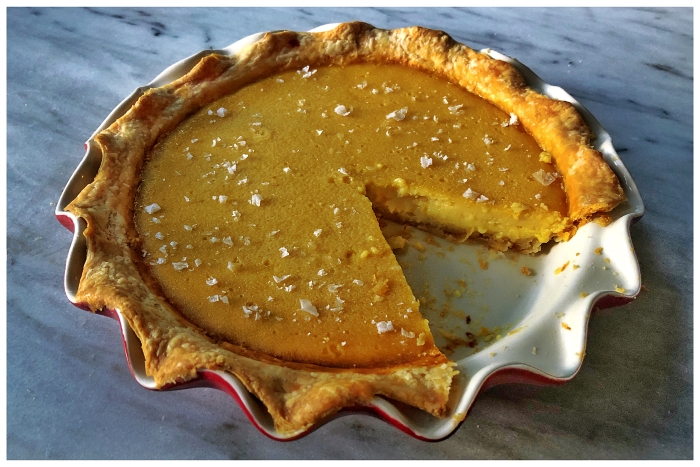 Since local fruit is a mere gleam in the eye at present, I sought some other sweet filling to test Susan’s master crust and came across an intriguing salted honey pie on chef David Lebovitz’s blog (davidlebovitz.com).

Beyond the Beatles’ musical reference, it actually harkens back to ur-recipes for sweet pies which generally used honey as a sweetener. A quick web search uncovered a rich vein of variations, mostly based on a pie from Brooklyn’s Four & Twenty Blackbirds bakery, but the filling in most is basically a simple and not-too-sweet custard (this one uses buttermilk, but whole milk or cream were referenced as was a dairy- or at least lactose-free version). The baked and cooled pie is finally tweaked with a finishing sprinkle of flaky sea salt — Maldon is perfect. Don’t use kosher or any other commercial boxed salts.

The crust for this variation is pre- (or blind-) baked, which is a bit more energy- and time-intensive. But on the whole it’s still just as easy as pie.