The Beacon City Council is expected on Monday, June 3, to confirm Anna Russell, a marketing and public affairs professional who specializes in clean energy initiatives, as the city’s first Climate Smart Communities coordinator.

The coordinator will help Beacon officials organize and implement the various projects that will earn the city credit toward certification in the state’s Climate Smart initiative. That, in turn, will move Beacon closer to the front of the line for a share of Department of Environmental Conservation grants for climate-resilient projects. 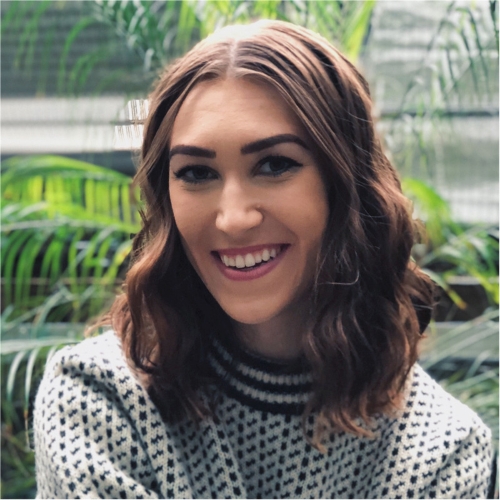 If achieved, certification could pay off well. Last year, the DEC made more than $9 million in climate funding available to municipalities in New York; of the 261 communities registered for the Climate Smart program (including Philipstown, Nelsonville and Cold Spring), only 20 have achieved bronze certification, with four others certified silver.

The council also is expected on Monday to name its volunteer Conservation Advisory Committee as the task force for the Climate Smart Communities program, which will work with the climate coordinator.

If her hire is approved, Russell will work 30 hours per month at $25 per hour. The 2018 Nyack College graduate lives in Beacon and is a deputy account manager with Arch Street Communications, based in White Plains.

The council on Monday will hold another public hearing — the fifth since November — to discuss revisions to its sign ordinance.

Signage regulations have vexed the council for more than a year. In June 2018, city attorneys indicated that Beacon’s then-law was likely unconstitutional. That conclusion was presented while the city sparred with Jason Hughes, a Hanna Lane property owner who argued he was being targeted for politically themed, oversized signs he’d hung (and continues to hang) from a warehouse he owns that faces Route 52 and Memorial Park. 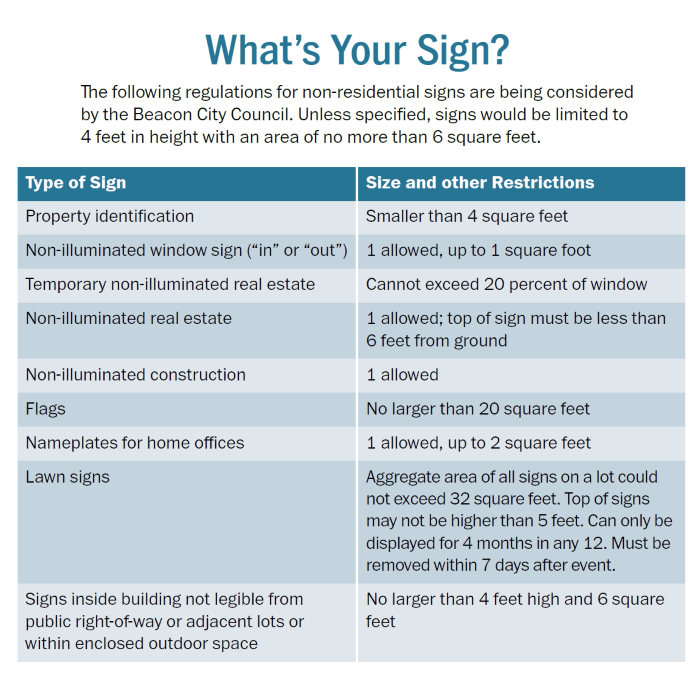 Earlier this month, Hughes took the council and City Attorney Nick Ward-Willis to task during a hearing, alleging that 20 other buildings on Main Street were in violation of the code in 2017 and 2018 but went unchallenged, while he was summoned to criminal court twice.

The version of the law up for public comment on Monday includes a number of changes from the previous draft, such as prohibiting all inflated signs and projected images while permitting wind-animated banners for commercial uses along Route 52 and Route 9D. The draft also includes guidelines for digital signs such as gas station price boards.

Work was set to begin this week at Green Street Park, where contractors are rehabbing the corner of Prospect and Union streets.

Beacon was also awarded $60,000 by the county last month to install play structures that integrate the natural environment and will be accessible for “multiple populations,” Recreation Director Mark Price told the City Council this week.

The city continues to develop a master plan for upgrades at the park. One idea is a “bicycle highway” that would extend around the park perimeter where children could learn to ride, Price said.

Council members on May 28 postponed consideration of a resolution that could have been interpreted as opposing a proposal by Danskammer Energy to build a fast-starting, air-cooled facility to replace its nearly 70-year-old natural gas-powered plant in Newburgh. The new plant would still use natural gas but its emissions would be cut significantly, Danskammer officials say.

If approved, the company says the facility will provide energy for about 500,000 homes and businesses and complement the state’s increased usage of renewable energy sources. But a number of environmental groups have cautioned Beacon and other nearby municipalities regarding impacts.

The resolution does not explicitly oppose Danskammer’s proposal but urges Gov. Andrew Cuomo and the state Public Service Commission to consider the public health and environmental concerns raised by groups such as Scenic Hudson.

Several council members noted, however, that the state should already be aware of those concerns. “Isn’t that part of their job? I don’t know why we have those [state] boards if it’s not part of their jobs to do what we’re asking them to do,” said Mayor Randy Casale.

Danskammer asked the Public Service Commission last year for permission to rebuild its facility. The state is in the middle of a review of the proposal, which involves conducting studies on potential impacts and holding public hearings. Danskammer says construction of the new plant would take 30 months.