Many documentaries tell a “slice-of-life” story. Artisans of Beacon, a new film by Michael Gersh, serves up six slices.

Gersh, who teaches television production at Beacon High School, trained his lens on a half-dozen members of the Beacon community and their working lives: Deb Davidovits, a beekeeper; Eva Gronowitz, a puppetmaker; Jon Joseph, a welder; Lisa Tompkins, a doughnut-maker; John Vergara, a luthier; and Jessica Wickham, a woodworker.

In segments that each lasts about 6 minutes, they speak from their workplaces about what they do, and what inspires them to do it.

The film can be viewed at bit.ly/beacon-artisans and Gersh will also share them on Friday, June 7, at the Howland Public Library as part of the Reel Life Film Club for middle school students. The ongoing series is a collaboration between the Howland, Butterfield and Desmond-Fish libraries. 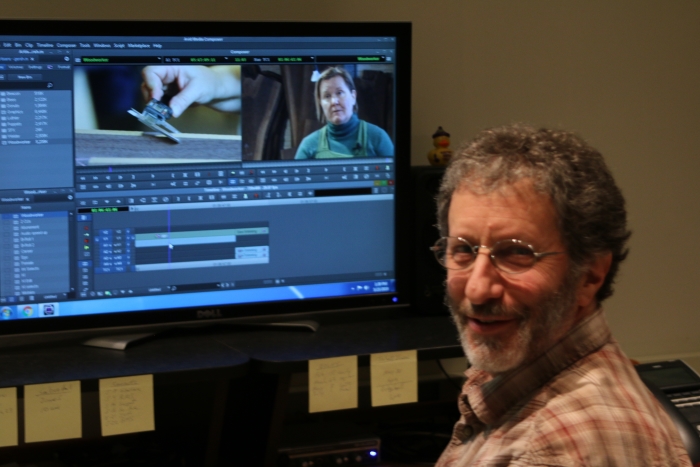 After the screening, Terry Nelson, a BeaconArts board member and former director of the Beacon Independent Film Festival, and a member of the Beacon City Council, will moderate a Q&A with Gersh. All students in grades 6 and higher are invited to attend. Pizza will be served, and registration is encouraged by emailing [email protected] to ensure there is enough for everyone.

“A recurring theme in the Reel Life series is people who find something they are passionate about and work hard to follow their dreams,” says Michelle Rivas, the Howland librarian who oversees young adult programming. “We’ve shown films about writers, dancers, chess champions — even spelling-bee winners. What’s wonderful about this film is that it highlights the work of local artisans and makers. And it’s wonderful for people to see that things are still made by hand.

“So much of Beacon’s history is centered around making,” she adds. “In our industrial past, Beacon was known for making bricks, hats, rubber rafts, electric blankets and so many other things. Today our city is full of individual artisans and small-business makers.”

“First you make the insides; you create the base of the puppet, without any features like nose and eyes. People send a picture in, and I ‘muppetize’ them. Each puppet has a puppet soul.”

“You’re finding the piece in the wood. You start to realize that there is a language to the wood — it’s like music. You have to understand the range of qualities that’s there. Many times there are very subtle decisions being made. I love that aspect of this work. There comes a point in each project where you have to kind of shut up and look.”

“We used to take VWs apart and make dune buggies and mountain buggies. It’s heavy and hard and filthy, dirty work. But I never mind getting dirty — I’ve been dirty my whole life. It’s enjoyable; I don’t have any complaints.”

“The doughnut of the day — that’s probably the hardest part of everything, because you want it to be creative, funny, to taste good, be different. You think the day before, ‘OK, that sounds good,’ but then you come in the next morning and your taste buds might be saying something different. There are some days we get it on the first doughnut. Some days we’re four doughnuts in and we’re kind of like — then we finally find it.”

“The mental state of the maker during the making of the instrument will affect the sound. Even though I love it, it’s not easy. I want to keep producing instruments that make people say, ‘Wow — what a difference between mine and this one.’ ”

“The reward is just kind of being connected to something so fundamentally rooted in nature and learning from it. Every time I get into my hives I write in my journal. I became aware that I was writing more using a pen and paper, observing more.”

Gersh says his interest in watching people make things inspired the film. “I find it mesmerizing,” he says. “It can be anything, from plumbing to woodworking. I thought about filming artisans because it was something I could do on my own, without a crew or lots of equipment.”

He chose his subjects after encountering them in his daily life. For instance, “Lisa [Tompkins, the doughnut-maker] worked at the high school and her husband was the wrestling coach there. My wife is the cantor at a synagogue and she needed a guitar fixed — that’s how I met John [Vergara, the luthier]. The puppet studio was in the old Beacon High School building and I met Eva [Gronowitz] during an Open Studios event there.”

Gersh notes that while people may be surprised to find Jon Joseph, the welder, among his artisans, his “creativity is amazing. I wasn’t sure he’d go along with filming, and was happy when he said ‘yes.’ ”