After decades of recording, Garrison producer still in tune

In the early 1970s, Garrison resident Al Hemberger and his brother Ted founded The Loft, a recording studio in Bronxville. Over the next five decades, they played with and recorded musicians from around the world, including many singers who later topped the charts, such as Britney Spears, Christina Aguilera, Kelly Clarkson and Rihanna. We caught up with Hemberger, who is also a well-traveled musician, at the studio while compiling our Summer Music Guide.

When did you realize music would be your career?

I never realized it. I didn’t choose it. But when I was 12 or 13 my parents gave me a reel-to-reel tape recorder. I drew a picture of it, along with a window and two wires going to another room — a vision of a recording studio. Pretty much everything I do has been self-taught.

I always end up on bass because that’s usually the last thing that’s needed [in a recording session]. A lot of my early recording was with my brother, who played drums. I played keyboard and guitar. 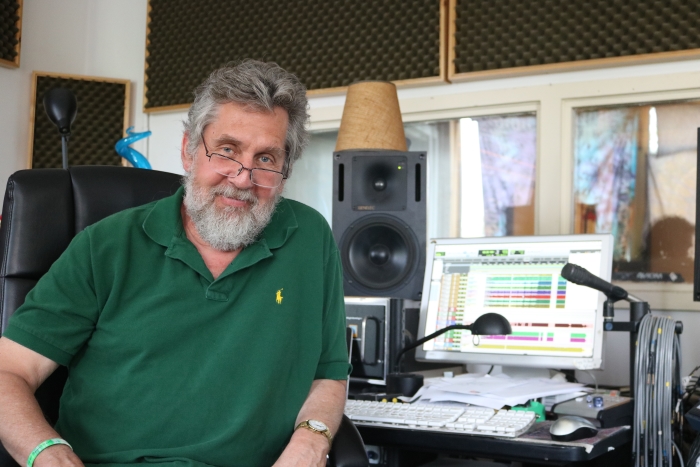 Al Hemberger at The Loft (Photo by M. Turton)

How did the studio end up in Bronxville?
The Loft began in 1968 as a children’s film-and-theater center; my brother and I built sets and I wrote music for about 20 shows. I bought an eight-channel machine and started to charge for recording, mostly for friends. Over time, we took it over.

You’ve played a lot of gigs. Which have been most memorable?
Pete Seeger at Croton Point with Work of the Weavers, Arlo Guthrie and Happy Traum. And we played in Central Park for The Nature Conservancy with Marvin Hamlisch, Charles Kuralt and Don Henley. I feel like the Forrest Gump of music because I sometimes end up in these weird things.

What’s the story behind your song, “She Loves the Cuban”?
It’s better if people just wonder what the heck it’s about. It’s part autobiographical, part made-up.

Are stars harder to work with than neophytes?
Most of the pop stars we’ve worked with were young, just starting out. I haven’t come across any divas.

What’s your take on music now compared to when you were a teenager?
Music is segmented, both on the radio and how people take it in. Rather than buying an album, you have access to everything, from the raw, beginning artist to the polished professional. It’s wonderful but also overwhelming. It’s even more fragmented lately, combining all kinds of influences. Hip-hop, for example, is full of jazz and there’s chords and strings and orchestral elements, all kinds of melodies. It’s an interesting mix. 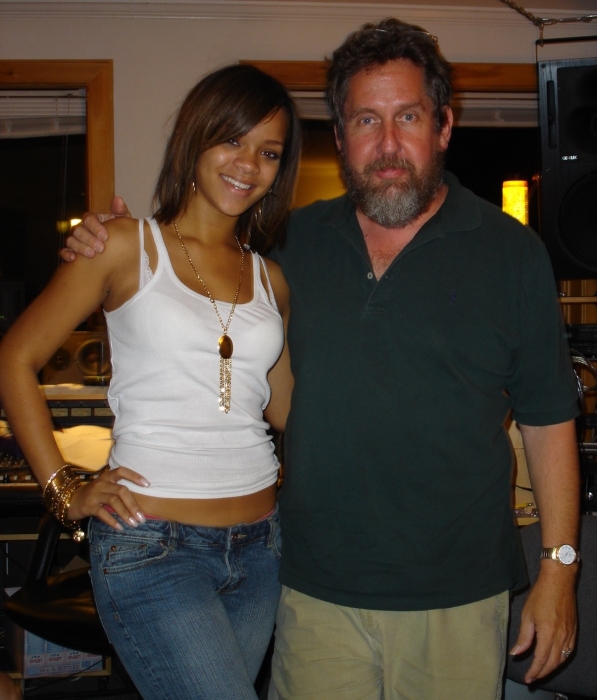 Has your taste in music grown more eclectic?
I’ve always been interested in whatever comes along. When artists record here, I fall in love with their songs, try to make them sound as good as I can.

Is working as an engineer similar to performing?
Once you understand all the tools, engineering can be musical. Ironically, when I work in Pro Tools [software], I’m thinking about sound but editing visually. You can go through each track, say “I love that part” and mute everything else.

Is it true that within every musician lurks a mathematician?
I was terrible at math as a kid, but music engineers need to control and order their world. I have that kind of mind. It’s odd because, as you can see, this place is totally disorganized.

Is it harder for musicians to perform in a studio, without an audience?
There’s something to that. What’s cool about this live room is you can have a whole band recorded at the same time. That gives the music more life. Music is done piecemeal now so it can be “perfect,” but sometimes that’s not where the energy is. After recording live, musicians sometimes feel the need to re-record their vocals. I did a record where the guy was singing through an old, terrible, beer-smelling mic, but he was having so much fun playing with the band, it sounded great. We kept all his vocals.

Do you specialize in what you record here?
I had a teacher who had students sing songs that teach them Latin. I’ve recorded Sha! Capella, a group of local kids. Small choirs come in. Over time, we’ve done everything from ska, klezmer and blues, to country, hip-hop and lots of pop. 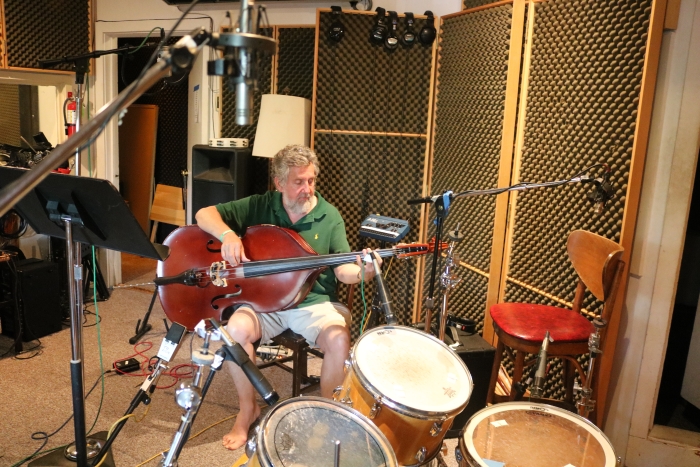 Hemberger playing bass at his recording studio in Bronxville (Photo by M. Turton)

Is music a human need or simply entertainment?
It may be a tribal thing. We need community. I did a gig in the city recently. It was one set, a long trip, a pain to park, I made no money. It kinda sucked! Then you get up and play the song and go: “That’s why I’m here. This is great.”

Why do certain notes and lyrics have such a strong emotional effect?
In part it’s the quality of the performer, like Aretha Franklin or  Gladys Knight, whose voices emote so much. And it’s the music that’s put together for them, the melody, the words, the vibe of the musicians. Latin music, for example, has a feel to it. Even when sung in a foreign language, something resonates.

Who are you playing with these days?
I still have my band, The Renovators. I also play with Kerry Faselt Hopwood, the Dan Zlotnick Band, Andrew Cole and the Bravo Hops and Breakneck Ridge Revue. Recently I’ve played with Derek Dempsey and Celtic Soul, which is an interesting mix of Celtic, rock and R&B.

One thought on “Music Man”