Filling of his trustee seat pending

By a 3-1 vote on Wednesday evening, the Nelsonville Village Board selected Trustee Michael Bowman as mayor in a term ending next spring, when voters can elect someone to serve as the village’s chief executive until March 2021.

The June 12 vote was prompted by the resignation in late May of Mayor Chris Caccamise, who stepped down just weeks into his term because of a likely, if unexpected, family move. Under state law, when a vacancy occurs in a mayor’s office, village trustees must pick a fellow trustee to fill it until the next general election. 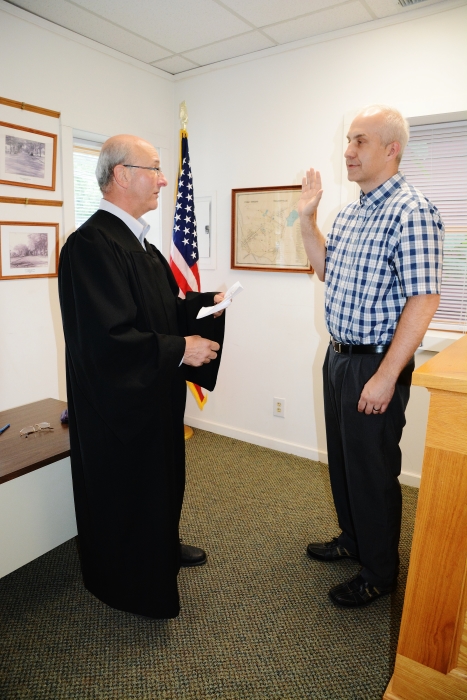 Trustee Lisa Mechaley, who nominated Bowman, Trustee Dove Pedlosky, and Bowman voted to appoint him as mayor. Trustee Dave Moroney voted “no” without explanation. Bowman, as mayor, will now choose his successor as trustee.

“I’m sorry that as a community we have to go through this so quickly” after the recent election, Mechaley said. “I know there are people who feel they’ve lost their voice in the community. I don’t know why. I think we can reach out to each and every person and feel that’s important.”

On March 19, Caccamise defeated incumbent Bill O’Neill in an election in which voters also rejected incumbent Trustee Alan Potts. Acrimony tinged the campaign and hints of it resurfaced Wednesday night.

O’Neill had appointed Caccamise as an interim trustee in August after then-Trustee Thomas Robertson resigned. Coincidentally, O’Neill, too, now plans to move and has listed his home for sale.

How long O’Neill’s move had been contemplated sparked a clash on Wednesday, with the former mayor accusing Bowman of lying. “My house was never on the market last year,” O’Neill, who was in the audience,  asserted. “Your statement that my house was for sale is a lie.”

Bowman, though, contended that in 2018 O’Neill had told him, Potts and Moroney that he intended to make one of them deputy mayor “because you were selling your house.”

And so it went.

Audience members pointed to rumors, still bruited about, that before the election, Bowman and others had planned to take control of the board and install him as mayor.

“If that were true, I would have run for mayor,” Bowman responded. “For that to have happened, I would have had to plan an election from my son’s hospital bed,” because the infant was ill in late winter. Actually, he said, when some residents suggested he run for mayor, he declined.

Now, he promised as mayor to “never shut down public comment” and to be readily available by phone, messaging and otherwise. He also said that governance requires work by the entire Village Board. “I might be mayor, but all of us are in charge,” he said. “We’re all going to be called upon equally to tackle the issues.”

As a village, “we need [efforts] to bring us together,” resident Gloria Van Tassel remarked. “This can be a time of healing. We don’t want ‘It’s us against them.’ I just want people to be heard.”