In Philipstown, a conservation subdivision permits more development if the land is environmentally protected. The first project to apply for this designation, called Hudson Highlands Reserve, proposes 25 large homes, eight of which will be sited around a pond that drains into Clove Creek. The project also calls for a 40-horse commercial equestrian facility on conservation land. This project lies off Route 9 between Horton Road and East Mountain Road North.

The recently completed Draft Environmental Impact Statement (DEIS) submitted by the applicant raises more questions than it answers. Because this project would be the first conservation subdivision under this new law, it’s critical that the precedent it sets protects our natural resources by setting a high standard for quality development.

You can comment on this proposal at the Philipstown Planning Board hearing on Thursday, June 20, at 7:30 p.m. at the Old VFW Building, 34 Kemble Ave., in Cold Spring or by emailing Board Chair Anthony Merante at [email protected] no later than July 8.

Whether wild or domestic, animals will lose if the Hudson Highlands Reserve is developed as proposed.

A wildlife corridor between two parks will be disrupted and a drinking source for native wildlife will no longer be available if houses are clustered around the pond. There is a crisis of species collapse throughout the world as a result of unenlightened, poorly planned development.

Furthermore, as an owner and observer of horses in this area for 35 years, I believe the 40-horse commercial barn is a grandiose folly that will destroy fragile natural habitat and is ultimately unsustainable.

Philipstown should be an example of wise development that protects our natural resources. 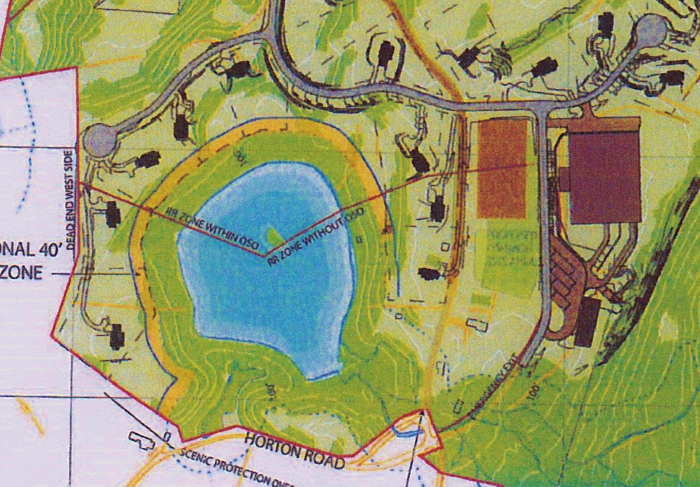 Detail from a 2018 drawing for the proposed Hudson Highlands Reserve shows the pond surrounded by eight homes. The brown rectangles to the right are an outdoor area and stables.

One of the most frustrating and time-consuming problems facing a Planning Board is a developer who refuses to work with them. This seems to be the case with the developers of Hudson Highlands Reserve — Ulises Liceaga, the architect, and Horton Road LLC, which is owned by the David Isaly 2008 Trust. The trust is managed by Liceaga’s wife, Christina, who is the sister of David Isaly. They both are children of Sam Isaly, the founder of OrbiMed Advisors, which Stat News in 2017 called “biotech’s largest and most powerful hedge fund.” In 2018 it was reported to manage $14 billion in assets.

That may be why the developer feels no need to respect Philipstown’s laws, or to follow any of the Planning Board’s guidelines. Instead, he simply spends more money trying to circumvent them, then brings in a parade of “experts” to tell board members they don’t know what they’re talking about. The Planning Board sends the developer back to the drawing board, then he throws more money at “mitigation,” but doesn’t actually change anything. This has been going on for five years.

Regular Philipstown residents must provide 1 acre per horse; farms have a bit more leeway. The developer, however, is demanding that the new residents of the 25 prospective houses be allowed to stockpile 40 horses in an industrial-sized riding center on 11 acres. Told to reduce the number, he brought in an “expert” to explain why he didn’t have to.

The point of a conservation subdivision is to protect our natural resources, such as the land’s pond, which connects to Clove Creek and provides sustenance for local wildlife. The developer has clustered eight houses tightly around it, effectively cutting off all access for wildlife and endangering the health of both the pond and the creek. Told he needed to site the houses away from the pond, he brought in “experts” to explain why he didn’t have to. This list goes on.

Going up against people of means and facing potential lawsuits is something with which all planning boards must deal. Please show your support for the board.

Horse sense or horseshit? Has anyone looked into this aspect of the Hudson Highlands Reserve? If one does the math, the environmental concerns are extraordinary and the prospect for Clove Creek. And the surrounding wetlands could be dire.

Forty horses for 11 acres, as is being proposed for the Hudson Highlands Reserve development in Philipstown, seems unfair to the horses. And the runoff will not be good for the ecosystem. According to research by Penn State University, each 1,000-pound horse produces 51 pounds of manure each day.

Cut the number of houses and horses by half. This is a negotiation. The developers are starting high to end in a desirable position. Let them bring their experts. But the town should hold its ground, as it has for the last five years.

One thought on “Letters: Conservation Subdivision”